The U.S. women’s beach volleyball team of Sarah Sponcil and Kelly Claes was ousted from Olympic play Sunday after a twice-reversed challenge ultimately went in favor of their Canadian opponents.

The controversy left the American athletes frustrated – and left many U.S. fans watching on TV confused and outraged.

The teams were tied heading into a deciding third set, the U.S. team having won the first set against Canada’s Heather Bansley and Brandie Wilkerson 24-22 and lost a lead in the second before falling 21-18. 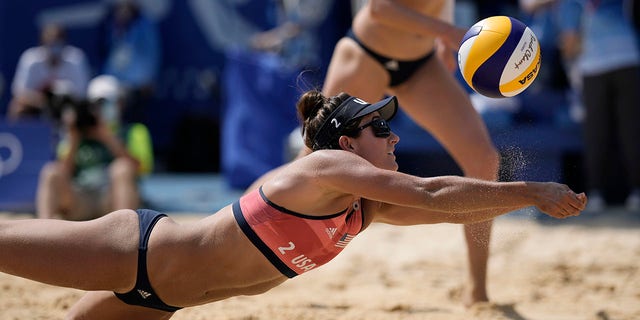 Sarah Sponcil, of the United States, competes during a women’s beach volleyball match against Canada at the 2020 Summer Olympics, Sunday, Aug. 1, 2021, in Tokyo. (Associated Press)

The Americans’ challenge “win” tied the game 12-12 but the Canadians complained about the ambiguous message – and the call was decided in the Canadians’ favor. They went on to win the match a short time later.

Canada’s Bansley, having won, took the controversy in stride.

“I think they’re just sort of working out some kinks,” Bansley said about the apparent tech glitch. “We trust the technology they have. At least you know the correct answer, and you work from there.” 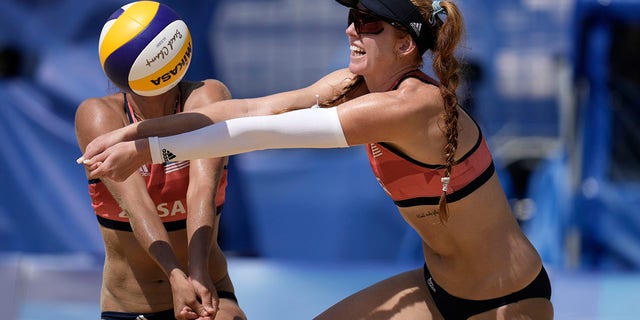 Kelly Claes, right of the United States, and teammate Sarah Sponcil converge to return a shot during a women’s beach volleyball match against Canada at the 2020 Summer Olympics, Sunday, Aug. 1, 2021, in Tokyo. (Associated Press)

The ball was ruled out on the Americans’ challenge but the operator accidentally hit the wrong button so the scoreboard read that it was successful, NBC Olympics reporter Chris Marlowe reported.

“The referee corrected the mistake, and that was that,” he wrote.

U.S. player Sponcil argued with the referee over the double reversal and was given a yellow card, according to Sporting News. 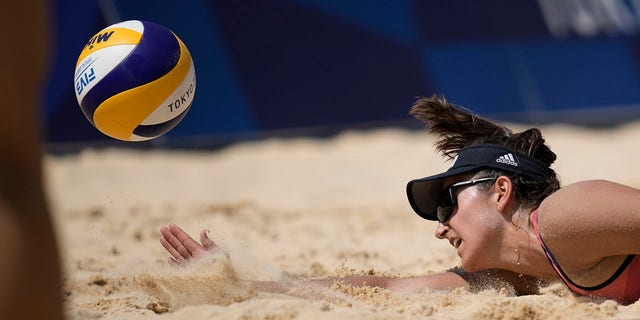 Sarah Sponcil, of the United States, dives for the ball during a women’s beach volleyball match against Canada at the 2020 Summer Olympics, Sunday, Aug. 1, 2021, in Tokyo. (Associated Press)

Sportswriters and Stateside fans weren’t having the back and forth.

“So, in beach volleyball, the US challenged, won it, and then Canada challenged the challenge and won? I don’t understand it at all. Claes and Sponcil don’t, either,” Bally Sports writer Maggie Hendricks tweeted.

“USA got hosed by the officials. It’s either in or out,” local Nebraska reporter Anthony D’Agostino tweeted. “Once a ruling is made, that should be that. How Canada could challenge the result of a challenge is beyond me.”

U.S. player Claes said she’s never seen a double reversal before. (A team cannot appeal the decision in a challenge, but in this case the problem arose in communicating the decision to the players.)

“It shouldn’t have even come down to that third set. We did such a good job in the second, and then just let them back in.” 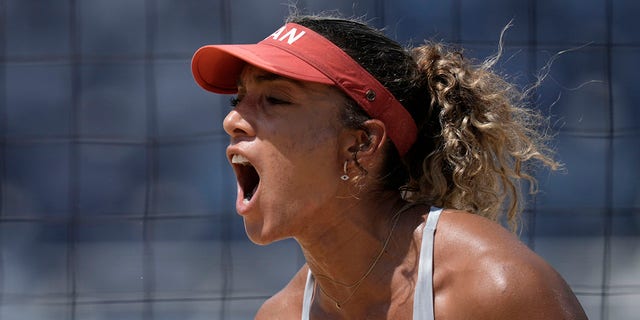 Brandie Wilkerson, of Canada, reacts to winning a women’s beach volleyball match against the United States at the 2020 Summer Olympics, Sunday, Aug. 1, 2021, in Tokyo. (Associated Press)

At ages 25 and 24, respectively, Claes and Sponcil are the youngest American team ever to qualify for Olympic beach volleyball and would still be younger in 2024 than any of the other American teams right now. 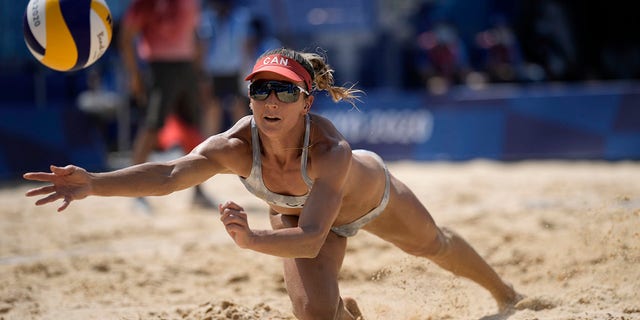 Heather Bansley, of Canada, dives for the ball during a women’s beach volleyball match against the United States at the 2020 Summer Olympics, Sunday, Aug. 1, 2021, in Tokyo. (Associated Press)

“Huge learning moment for us,” Claes said. “It sucks right now. It’s probably going to suck for a few weeks. But probably looking back I’ll for sure look at that and take that into account. But right now, like, it stinks.”