“They tryna get that stimulus!”

A disturbing video out of Flint, Michigan shows a female postal worker being savagely beaten in the street by two women in broad daylight.

The clip, circulating on social media on Friday, does not show what lead to the altercation, or who started it.

The brutal footage shows the USPS driver, in full uniform, being dragged around the road by her hair as the two women repeatedly punch and kick her in the head and face.

A third older woman appears to try break them up, but the man filming the fracas pulls her back.

After managing to get back to her feet, the postal worker roars at the women, who retreat into their car; they can be heard insisting “you hit me first!”

“Y’all goin to jail,” someone can be heard commenting off camera, as the man recording says: “Y’all hit the mailman! They tryna get that stimulus, this s— get serious!”

A pan to the right reveals a sizeable dent in the front of the postal van, suggesting a fender bender may have been the catalyst. “They hit this mail lady’s car,” the filmer adds at the end.

As he continues to comment, the two women suddenly slam their car into reverse and escape the scene, causing him to jump out of the way, protesting “you ain’t gonna run me over!”

Flint Police Department is investigating the incident, which it said occurred on Thursday.

Detective Sgt. Tyrone Booth told MLive detectives had already made one arrest. He added that the mail carrier’s condition is good. 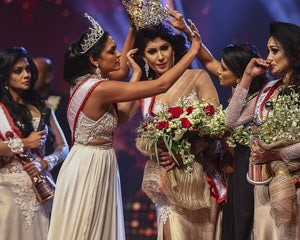