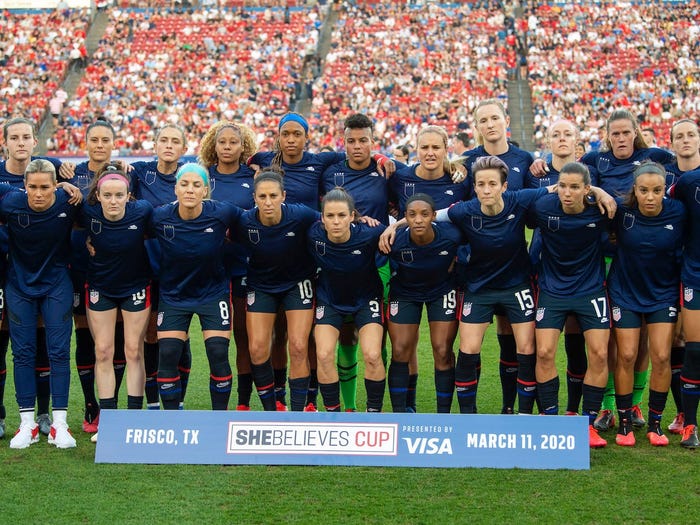 Players on the US Women's National Team have never shied away from fighting for what they  believe in, and their first game in 261 days is no exception.

In a video released by the team, players explained that the decision to wear the words "Black Lives Matter" across their chests "is not political." Rather, they intend to make "a statement on human rights."

"As a team, we work towards a society where the American ideals are upheld and Black lives are no longer systemically targeted.," players said in the video. "We collectively acknowledge injustice, as that is the first step in working towards correcting it."

"To honor the words of the great John Lewis: 'When you see something that is not right, not fair, not just; say something, do something, get in trouble — necessary trouble,'" they added.

The USWNT has a long history of using its platform to push back against injustice. Back in March, players partook in a silent protest against the US Soccer Federation by wearing their warm-up jerseys inside out after filings in their equal pay lawsuit suggested that unequal pay for women is fair because "men are bigger, stronger, faster."

Long before then, Megan Rapinoe became one of the first professional athletes to kneel during the national anthem alongside Colin Kaepernick in protest of police brutality and racial injustice in America. Four years later, US Soccer apologized to Rapinoe for the way it handled her demonstrations.

The USWNT's rematch of its 2019 World Cup final bout against the Netherlands Friday marks its first game outside of the United States since the team captured its fourth star two summers ago. Though the team will boast a new look with a mix of veterans and fresh faces — including newly-minted head coach Vlatko Andonovski — the USWNT still retains its No. 1 ranking in the world. The Dutch, meanwhile, clock in at fourth on the list.

Alex Morgan, Rose Lavelle, and company kick off against the Netherlands at 12:45 p.m. EST Friday. Viewers can tune in on ESPN2.