The Victorian government says it will crack down on businesses and patrons who don’t use the state’s QR code system after it emerged dozens of people who dined in a city restaurant at the same time as a man with coronavirus had not checked in.

But the opposition has criticised the government for its failure to enforce coronavirus restrictions, including mandatory check-ins, and delays in rolling out a single QR system across the state. 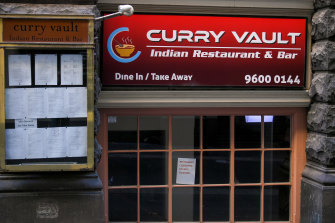 The Curry Vault restaurant in Bank Place was named an exposure site after a Wollert man who contracted coronavirus dined there on Friday night.Credit:Eddie Jim

A man in his 30s tested positive for coronavirus on Tuesday, a week after returning to his home in Wollert in Melbourne’s north from South Australia. He had been quarantining in an Adelaide CBD hotel after arriving from India via the Maldives and Singapore.

His three household contacts have returned negative results. Seventeen of his colleagues have also been identified as primary close contacts. Eleven of them have tested negative so far.

The Department of Health’s contact tracers have been scrambling to find the contact details of all patrons who visited the Curry Vault Indian Restaurant at Bank Place in Melbourne’s CBD on Friday between 6.30pm and 9.30pm, when the man dined there.

Twenty-eight people who attended the restaurant have been identified as primary close contacts, and 16 have tested negative to COVID-19 so far. 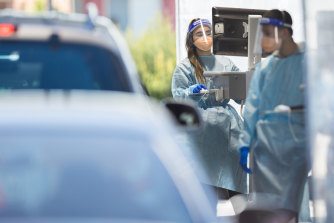 Cars queue at a COVID-19 testing site in Craigieburn on Wednesday.Credit:Jason South

Opposition frontbench MP David Davis said while both businesses and patrons had a “shared responsibility” to using QR codes, the government had been inconsistent in its approach to enforcing the system.

“I think the whole thing is a shambles in Victoria,” Mr Davis said. “I think the state government has not provided leadership or support for businesses, with many of them weak and vulnerable because of the multiple shutdowns.

On Wednesday, South Australia Police Commissioner Grant Stevens announced a seven-day operation to send officers to businesses to warn and potentially fine patrons and owners who do not use the state’s check-in system.

But she said these measures were critical in curbing the spread of an outbreak and allowing contact tracers to move as quickly as possible.

“This is a real problem because it just slows everything down,” Professor Bennett said.

“We need to maintain vigilance. If you don’t use a QR code to check into a restaurant, they will find you if you’ve paid by your credit card anyway or you might come forward for testing. But it just makes it so much easier if they’ve got those details and they can immediately let people know and start the process of doing what’s needed to assess the risk.”

Victoria recorded no further cases of coronavirus on Wednesday. The Department of Health said genomic sequencing released late on Wednesday “supported the hypothesis” that the Wollert man had acquired COVID-19 while in hotel quarantine in Adelaide.

South Australia has banned people who visit Melbourne’s high-risk exposure sites from entering the state. Those who have arrived in South Australia after visiting one of the sites are required to quarantine for 14 days, and get tested on days two and five.

Victorians travelling to Queensland will be forced to quarantine if they have attended one of the Melbourne exposure sites. Western Australia is requiring anyone arriving from Victoria who visited exposure sites at the specified times to get tested immediately and quarantine for 14 days from the date of exposure.

There are four tier-one exposure sites, including the TIC group office in Altona North (where the man worked), a Woolworths supermarket and the India Gates Spices and Groceries in Epping, and the Curry Vault Indian Restaurant in Melbourne’s CBD. The sites underwent deep cleaning on Tuesday evening. 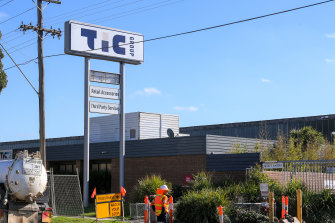 Contact tracers are working with the AFL to track down hundreds of fans who attended the clash between Richmond and Geelong on Friday and then travelled on the same Craigieburn line train as the Wollert man.

The other tier-two sites are the TIC back warehouse in Altona North and the 7-Eleven on the corner of High and Cooper streets in Epping (between 6.30pm and 7pm on Thursday and between 11.10am and 11.40am on Saturday).

Restaurant and Catering Association chief executive Wes Lambert echoed calls for Victorian businesses and customers to diligently use QR codes, but warned that punishing those who breached the restrictions would not always work.

“If consumers want to enjoy uninterrupted living with COVID-19 then it’s everyone’s responsibility to check in,” Mr Lambert said.

With Rachael Dexter and Roy Ward