Police officers in Virginia held an Army officer at gunpoint, handcuffed him and doused him with pepper spray — all during an illegal traffic stop. Officials said Sunday that one of the officers has been fired.

Officer Joe Gutierrez was fired following the December 5 incident, which was captured on video, the town of Windsor, Virginia said in a statement Sunday, acknowledging the “unfortunate events that transpired.” Caron Nazario, a second lieutenant in the U.S. Army Medical Corps, who is Black and Latino, is suing the town.

Following an internal investigation, the town said that Gutierrez did not follow department policy. They did not provide any further information on the other officer involved in the incident, Daniel Crocker, but said the department is requiring additional training.

“The Town of Windsor prides itself in its small-town charm and the community-wide respect of its Police Department,” the town said. “Due to this, we are saddened for events like this to cast our community in a negative light.  Rather than deflect criticism, we have addressed these matters with our personnel administratively, we are reaching out to community stakeholders to engage in dialogue, and commit ourselves to additional discussions in the future.”

In both body camera and cell phone video, Nazario, in his Army uniform, is seen with his hands out the window of his car.

Then, two police officers order him to get out of the car, drawing their guns.

“I’m honestly afraid to get out,” he said.

“Yeah dude, you should be,” one officer responds.

In the video, Nazario repeatedly asks why he was pulled over, and one of the two officers pepper sprays and kicks him. He expresses concern for his dog, who he says is choking on pepper spray in the back seat.

He is then handcuffed on the ground while police search his car. 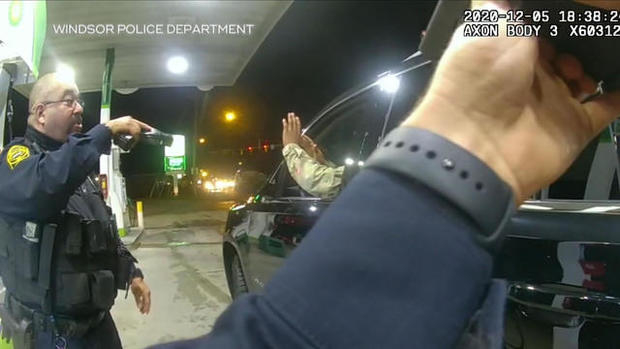 Nazario asks, “Why am I being treated like this? Why?”

“Because you’re not cooperating,” an officer responds.

Attorney Jonathan Arthur, who is representing Nazario in a lawsuit filed earlier this month against the two officers, said that he was afraid if he took his hands out of view, something even worse would happen.

“To unbuckle his seatbelt, to do anything, any misstep — he was afraid that they were going to kill him,” Arthur told CBS Evening News.

The incident report said that Nazario was initially pulled over for not having tags displayed on his SUV, but the temporary dealer plate is visible in the officer’s body camera video. The lieutenant had recently bought the car.

Nazario was released without being charged. He has accused the officers of using excessive force, illegally searching his car and violating his constitutional rights.

“What prompted him to file is the need to stop this conduct,” Arthur said. “The need to hold these two officers accountable and make sure they cannot do it again.”

Virginia Governor Ralph Northam called the incident “disturbing” and said Sunday that he is directing the state police to conduct an independent investigation.

“I am inviting Army medic Lieutenant Caron Nazario to meet soon—we must all continue the larger dialogue about reform in our country,” he said in a statement.

Following his statement, the Virginia State Police said that it is initiating a “thorough and objective” criminal investigation into the traffic stop.