Manchester Thunder remain unbeaten after another impressive performance in the Vitality Superleague, while Sirens, Wasps, and Loughborough were also victorious.

Bath were top of the pile with three wins from their opening three games and with the leaders not in action this week, it was the defending champions who took the chance to take over at the top with a blistering display to leave Severn Stars winless.

After the first bye week of the season, the Superleague returns on Friday March 12 when Manchester Thunder and Team Bath put their unbeaten starts on the line.

Also on Sunday, Strathclyde Sirens extended their best-ever start to the season, while they were joined by top-four hopefuls Loughborough Lightning and Wasps in recording victories.

Round Four continues on Monday evening with two back-to-back matches as Celtic Dragons meet Saracens Mavericks and Severn Stars take on Loughborough Lightning. Watch live on Sky Sports Mix from 5pm, with the action also streamed for viewers in the UK and Ireland on the Sky Sports YouTube channel. 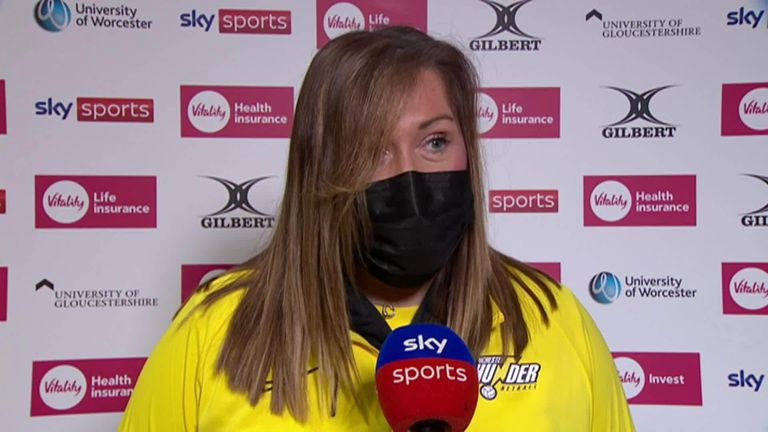 Karen Greig’s 2019 Vitality Netball Superleague champions remain unbeaten and move to the top of the table, after a 60-27 victory over Severn Stars that maintained their 100% start to the season.

Following last weekend’s 27-goal victory over London Pulse, Manchester Thunder upped the ante again and recorded a 33-goal victory against a Stars team that were punished for errors and will have to regroup before returning to face Lightning in Wakefield on Monday.

In defence, Rebekah Airey, Emma Dovey and Kerry Almond took full advantage of Stars having to field a new rotating attack end, after Georgia Rowe had been ruled out of the fixture. In attack, Thunder remained as cohesive and efficient as ever, with Laura Malcolm and Amy Carter finding the relentless Joyce Mvula easily.

In contrast to Thunder’s focused work, Stars’ output was more sporadic, not helped by the injury to captain Liana Leota, who alongside Nia Jones had been looking to keep the team competitive. However, as the game wore on, they lost their way.

Leota’s dislocated finger forced more changes for Melissa Bessell – perhaps with Monday’s game already in mind – but with Thunder holding a 32-14 half-time lead, captain Dovey implored her side to keep their foot down,

Although Issy Eaton worked well on debut, Stars’ second-half changes didn’t have a significant impact on the course of the match. Instead, Thunder maintained their intensity and when their talented youngsters emerged from the bench again, they slotted in seamlessly to contribute to a dominant victory.

Thunder now head into the bye week with a perfect three wins from three, and perfectly placed for a huge double-header against Wasps and Team Bath in a fortnight’s time.

You can’t win games at this level when you’re showing brilliant [periods] of about 30 seconds, and that’s exactly what we’re doing. From my point of view, I’m happy with little bits and pieces but I’m not happy with things like breaking and missing goals, that’s unacceptable.

Sirens march on with another victory

Strathclyde Sirens remain the Superleague’s surprise package as they added another victory to their tally, making it three wins from four with victory over a London Pulse team who have just one win from their three matches.

The Scottish outfit’s 35-30 result against Pulse was secured through a strong team performance.

After holding a 20-16 lead at the interval, and a 29-20 advantage at three-quarter time, Sirens then weathered a period of Pulse pressure well after Sam Bird had used the latter stages of the third quarter to amend their picture in attack. 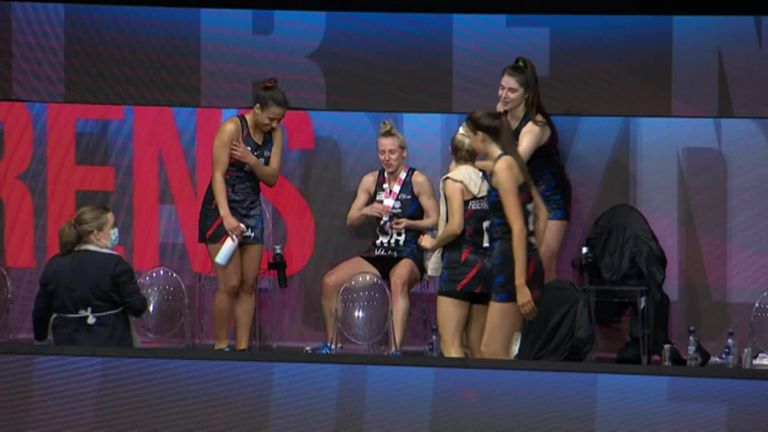 In attack, they stuck to their task superbly, with Bethan Goodwin proving a creative focus from goal attack and both Nicola McCleery and Gia Abernethy continuing fine starts to the season.

The mid-court duo used their nous to limit the impact that Halimat Adio and Funmi Fadoju had. The sharpness of their passing combined with the knowledge of when to let the ball go, and once they did, Barrie and Goodwin shot well.

In a low-scoring encounter, that proved decisive as Sirens closed out a win to match their three wins in total from the 2019 season and leave Atkinson vowing that there is more to come from her improving outfit.

I still think that we can push games out a bit more when we’ve got some momentum and some control. It probably shows where we’re at [that we didn’t] and I thought that we could have won it by a bit more. Credit to Pulse, they fought hard. It was a tough game.

Loughborough Lightning underlined their credentials as title contenders with an emphatic 70-41 victory over Leeds Rhinos, whose injury-hit squad had no answer after an even first quarter.

In their debut season, Rhinos have already seen Donnel Wallam, Fi Toner and Tuaine Keenan ruled out for an extended period through injury and they lost England international Vicky Oyesola to illness during the second quarter on Sunday.

By that stage, Loughborough had ridden the early Rhinos storm that had the league’s newest franchise within three goals during the latter stages of the first period.

However, inspired by the brilliance of Mary Cholhok, a 7-1 end to the opening 12 minutes was followed by a 17-9 second quarter that had Loughborough 17 goals to the good by half-time, despite the best efforts of the Rhinos’ talented youngsters Amelia Hall and Sienna Rushton.

Sara Bayman used her bench throughout the second half as she looked towards Monday night’s clash with Severn Stars, where a win will take them clear at the top of the table.

Lightning’s only defeat came at the hands of Team Bath, but with Ella Clark introduced from the bench, the pace of their play was unrelenting, leaving Rhinos with no answer but to learn a valuable lesson from their experienced opponents.

Loughborough poured in 20 goals in the third quarter and 15 in the final period and while their defence allowed Rhinos plenty of opportunities, the lead was big enough to allow Bayman’s team to rack up the highest goal tally of the season so far and more importantly, three valuable points.

Wasps bounced back from consecutive defeats with a classy 47-33 victory over Surrey Storm to get their season back on track in perfect style.

All 11 teams will have a weekend off after Monday’s matches and Wasps coach Mel Mansfield had asked her team for a reaction following defeats to Bath and Loughborough. She will have been pleased with what she saw.

A keenly contested start saw Storm, with teenage sensation Sophie Kelly to the fore, take an early lead but the experience of Wasps soon began to tell as they finished the opening quarter on the front foot and with a three-goal lead.

Early turnover in the second period saw them extend their lead to three, with Rachel Dunn and Katie Harris capitalising on the impressive work of their defensive end. Storm, in contrast, were unable to make the most of their chances and despite some typically efficient finishing from Karyn Bailey, it was Wasps that pulled into a 26-17 lead.

Much like the opening quarter, Storm were competitive as they stayed in touching distance through the third, Mansfield taking the chance to rotate her squad and maintain their lead.

The impressive Sophia Candappa and Iona Christian maintained the Wasps pressure through the second half, and in Fran Williams they had the stellar defensive talent on display as they closed out a second win of the season in style.

Sky Sports is your home of netball. The Vitality Netball Superleague continues on Monday with two more back-to-back matches – Celtic Dragons vs Saracens Mavericks and Loughborough Lightning vs Severn Stars – live on Sky Sports Mix and streamed on the Sky Sports YouTube channel from 5pm.