Childhood friends Shamsia Haqjo and Mohammad Yasin Rafat married in 2018 but have barely been able to be together since as they wait for any news about his visa to come to Australia.

They are among many couples waiting for years to hear the result of their partner visas as wait times blow out. New data from the Department of Home Affairs shows Afghan citizens wait almost three times as long for visas as the global average. 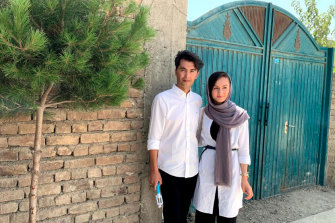 Mohammad Yasin Rafat and his wife Shamsia Haqjo applied in February 2019 for a partner visa for Mr Rafat to come to Australia but are still waiting to hear the outcome.

Mr Rafat, who is in Afghanistan, applied in February 2019, three months after he and Ms Haqjo were married and seven years after they became engaged.

“We’ve been waiting 27 months now and not heard anything back, apart from when we’ve emailed them,” Ms Haqjo, from Narre Warren, said.

“We’ve never gotten any requests for information from further documents, or anything that someone’s actually looking at our case.

“I am a taxpaying citizen and contributing to the Australian economy… [but] I feel that I’m being treated differently to other Australians just because I chose to love and marry someone from Afghanistan.”

The couple grew up in the same village in Afghanistan until Ms Haqjo’s family moved to Australia when she was nine. Their families stayed in contact and he proposed in 2012, though they decided to wait to finish their university studies before marrying.

The last time Ms Haqjo saw her husband in person was July 2019.

Now she’s worried that with Australia closing its embassy in Kabul – on top of Australia’s continuing border closures during the pandemic – everything will take even longer.

“People are getting scared. When you’re living there you can’t really stop your life, you can’t stop going to work,” Ms Haqjo said.

“Every single day, I just pray that he goes to works safely and he comes back home safely and that nothing happens to him because you don’t know when a bomb is going to go off.”

The government has cited security and military advice as western forces prepare to pull out of Afghanistan as the reason for closing the embassy.

Labor MP Julian Hill has heard from many couples in similar situations.

Data released to him under freedom of information laws shows average processing times for prospective marriage visas have more than doubled to 16.2 months over the past decade, and to 13.6 months for the provisional partner category.

But for applicants from Afghanistan, the average time in 2021 was nearly three years for prospective marriage visas and more than three-and-a-half years for provisional partner visas.

People from India and China waited about 18 months on average, but those from the United States and United Kingdom waited less than a year for provisional partner visas to be processed.

“Partner visas should be processed in the order they’re received, not according to which countries or ethnicities this government likes more than others,” Mr Hill said.

“If the security outlook in Afghanistan is so bad we have to run away, can you do something for the Australians whose families are stuck there?”

Recent data on rejection rates of travel exemptions for people wanting to come to Australia during the pandemic also raised questions of racial bias, showing Border Force approved exemptions from Britain and the US during COVID spikes while rejecting them at a far higher rate from places where the virus was barely circulating.

Border Force commissioner Michael Outram rejected the notion of any racial bias or that there were different standards for celebrities and sports stars.

“I am absolutely confident that our people are making decisions that are consistent, appropriate and based on the criteria and guidance provided,” he told a Senate estimates hearing.

“Where we’ve made mistakes, we’ve been transparent.”