Jay Leno has test driven one of the first Tesla Cybertrucks for his CNBC show Jay Leno’s Garage. And he asked a road trip buddy to ride shotgun: Tesla founder Elon Musk.

The incredibly weird, possibly genius Cybertruck won’t actually be available until late 2021—a number decided before Musk started to threaten to move his entire Tesla factory somewhere else, to be fair. But Musk guided Leno through a test drive in and around the Tesla factory grounds in Los Angeles. They summon the Cybertruck while wearing matching leather motorcycle jackets.

“I saw it on TV, I saw it at the intro, but nothing strikes you till you see it in person,” Leno tells Musk in the clip.

The Cybertruck will start at just under $40,000, which is low for a Tesla vehicle and not so far out of the range of existing conventional fuel pickup trucks. The 2020 Ford F-150, for example, starts at about $29,000.

And yes: The Cybertruck is intended to really be a truck, with a 100-cubic-foot bed. The Ford F-150 with the matching 6.5-foot bed and six-person cab jumps in price to start at about $37,000. Musk has said the Cybertruck will have options for between one and three engines, with performance specs that scale up with the number of engines. 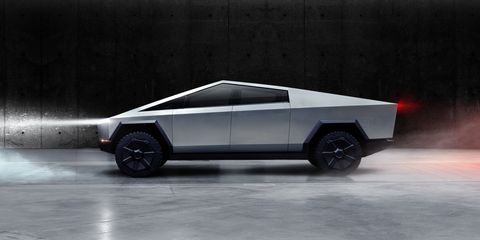 The prototype that Leno test drives isn’t a production vehicle, and he asks Musk what will change between now and when the first production Cybertrucks roll out. “We’re 5 percent too big,” Musk says, suggesting he’d like to drop all the proportions of the vehicle that much. “It’s gotta fit in a normal garage.” Lots of small details, like the glass, will also change, he says.

“Why is it important to you that it be bulletproof?” Leno asks. “Because it’s badass,” Musk replies. “We want to be a leader in apocalypse technology.”

Last year, we worried that the Cybertruck will be incredibly heavy, especially the models with three engines and supporting battery packs. The solid steel body and bulletproof glass are in the opposite direction of where consumer car design has gone in the last 10 years, toward lighter frames and body panels.

Leno and Musk drive down into a tunnel from The Boring Company, a narrow tube of steel-reinforced concrete where Musk encourages a cautious Leno to drive faster. “Cool tunnel,” Leno says. “Just my luck, that’s when the earthquake happens.”

At the end of the tunnel is an elevator, where Musk says, “Wow, we just barely fit,” which brings home his previous comment about the truck’s dimensions—it’s not practical to need to eyeball every squeeze into a parking spot or garage.

Leno thanks Musk and says, “This is a kind of bucket list thing to get a glimpse of the future.”