A video surfaced late last week of an F-15QA executing a remarkable ‘Viking Takeoff.’ The jet, built for Qatar, takes off like a normal fighter jet but immediately enters a steep climb, to the point where it looks like it is accelerating straight up. The two-seat fighter is not unlike the new F-15EX being built for the U.S. Air Force, which should be capable of similar levels of performance.

The video, taken on April 14th, shows a brand spanking new F-15QA built for the Qatari Emiri Air Force. The aircraft hasn’t even been painted yet and is a patchwork of materials colors, including yellow and aluminum. The aircraft is flying totally “clean,” with no drop tanks, no weapons, and probably no rear co-pilot. This reduces aircraft weight to the bare minimum necessary for flight testing and boosts the airplane’s thrust-to-weight ratio.

The F-15QA is powered by two General Electric F110-GE-129 afterburning turbofan engines, each of which produces the equivalent of 29,000 pounds of dry thrust. The F-15 normally weighs 45,000 pounds, meaning there’s about 1.2 pounds of thrust for every pound of aircraft. The F-15 has always enjoyed a high thrust to weight ratio—it was the first fighter jet that could fly straight up. The F-15QA can hit a maximum takeoff weight of 81,000 pounds, including weapons and fuel, and with all that weight would be considerably more sluggish in the skies. 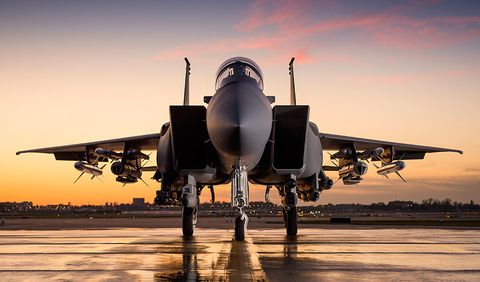 The F-15QA is the most current and advanced member of the F-15 family, which first flew in the early 1970s. The aircraft, originally designed as a single seat air superiority fighter, forked into a two-seat fighter bomber in the late 1980s. The F-15E Strike Eagle was initially produced for the U.S. Air Force and then later for South Korea, Israel, Saudi Arabia, and now Qatar. Over the years, Boeing has added more features to keep the aircraft current, to the point where the company claims its electronics and non-stealth capabilities are competitive with that of the F-22 Raptor or F-35 Joint Strike Fighter.

The U.S. Air Force is planning to purchase at least 72 new model F-15EX fighters. The -EX Eagles will be the service’s first new F-15s in a quarter century, and the service will likely pair them with stealth fighters to serve as a “flying magazine,” carrying large loads of bombs and missiles. The F-15EX will in many ways be identical to the F-15QA, and should be able to execute “Viking Takeoffs” on its own.

The fighter is set to enter Air Force service in the mid-2020s.