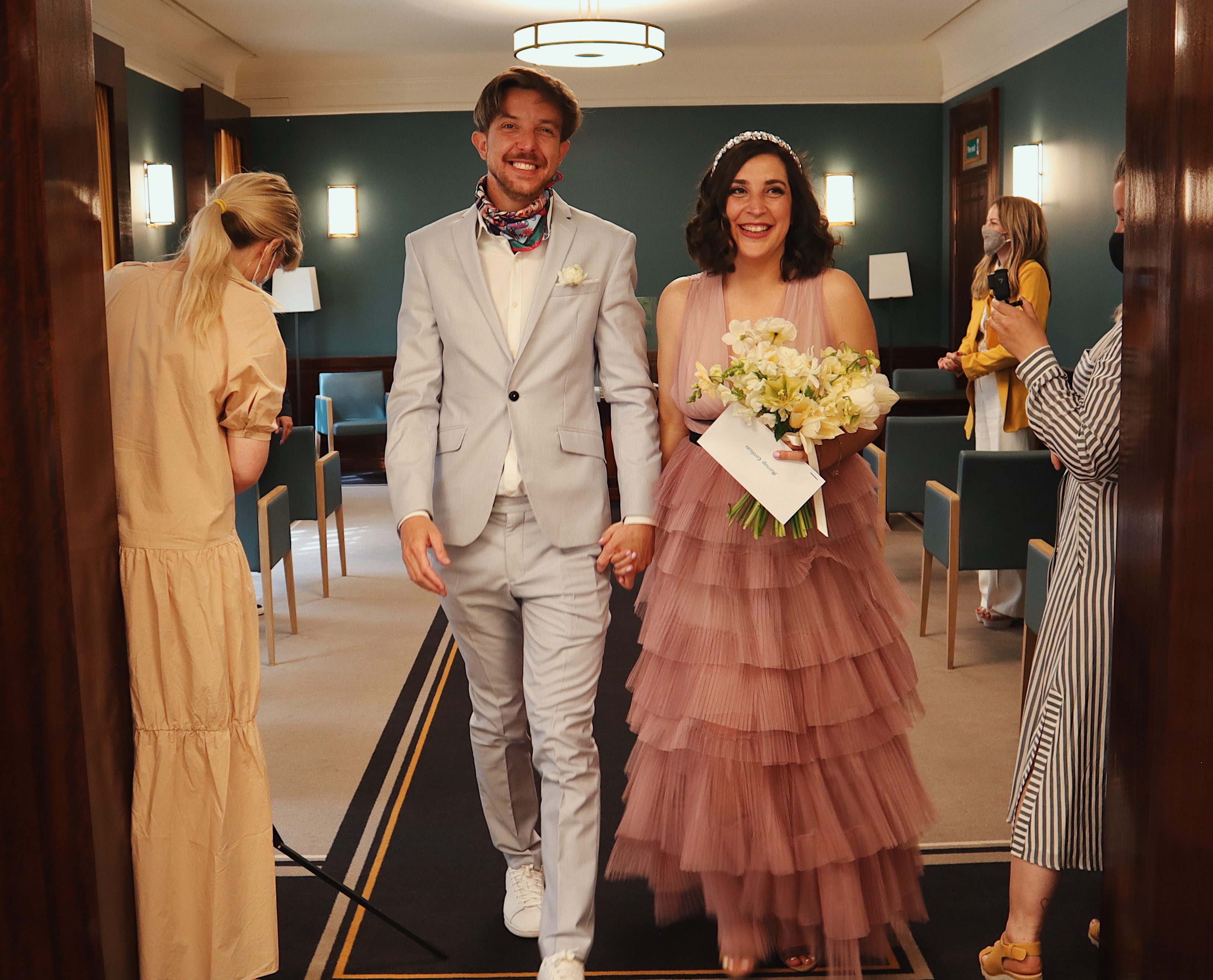 I was never one of those girls who dreamt about her wedding day growing up.

I thought it would be nice to have a party with all my friends and family, but grew increasingly disillusioned with the ‘most important day of your life’ sentiment that I witnessed from bridezillas in my 20s and early 30s.

So, when I met my current partner in 2015, marriage wasn’t at the top of my agenda.

And, full disclosure, my partner and I already have children, own a house and a business together – so the commitment level is 100% there. I’m not one to do things in the traditional order.

When we got engaged in August 2020 while on holiday in the Isle of Wight, we had dreams of hosting a big garden party in the south of France – where my partner is from – and were hoping that might be possible for this summer.

But it wasn’t just the pandemic throwing a spanner in the works there, it was the affordability. Even if you strip out the costs of the traditional wedding dress and suit, formal dinner, cars, flowers, band, photographer and just hire a venue hire with a buffet, you’re still looking at thousands of pounds.

If I’m honest, I’d rather spend that money on a new kitchen and bathroom.

And then there’s the layer of politics involved.

While we both have small immediate families, we have large extended families. When you start to include all the cousins, aunts and uncles, it ups our headcount by at least 50.

And that’s before we get onto our list of friends, many of whom during the last few years have taken on the status of family.

It’s not that I’m not romantic or don’t want to celebrate with all my friends and family, but whittling down that invite list felt too hard.

I also didn’t really see the point in being engaged for years. And, having gone through our fair share of medical crises with both ourselves or my immediate family (a most unwelcome cocktail of cancer, a stroke, open heart surgery, miscarriage and spinal injury from a fall), it really felt like we needed something to celebrate during the pandemic.

Since the third lockdown, I had been checking the Hackney Council website to see if the town hall was taking for wedding bookings again. When it opened slots at the end of March, there were dates from 12 April onwards. We booked for 30 April, although would have gone for the earliest day possible were it not for a holiday we were already going on.

So, we planned our wedding in a month.

It was a relief that government regulations meant we could only accommodate 10 people (including us!), rather than having to choose to restrict the numbers ourselves. It definitely took the pressure off on the day and it meant I only had a very short list of things to organise.

I did feel guilty though – perhaps most about not having my squad of five university friends there. But there was no way that I could invite one and not the rest of the group and with us only having four guests each we had to get ultra-selective.

In the end, it came down to who we’ve spent the most time with since having children, lived the closest to and who has been there during our darkest days. Everyone who came lives within walking distance or a short taxi ride away.

The ceremony was very quick and only lasted about 10 minutes. We were able to record on Zoom so our closest friends and family internationally were able to watch.

As our next-door neighbours came, we were able to socially distance across the two gardens for a buffet and a dance afterwards. It meant I was able to speak to everyone in depth. Despite appearing quite extroverted, I can find large gatherings overwhelming. It definitely felt very relaxed and easy with smaller numbers.

In fact, organising a socially distanced wedding in less than a month for 10 people was really rather easy. I didn’t go for a traditional wedding dress and picked mine up online from Wolf & Badger for £120. I’m attending the Business Book awards online at the end of the month so it should be getting its second turn out already.

In my day job, I love to champion small business, so the wedding provided me with an opportunity to support some of my favourite businesses that I have connected with online, some Hackney local, a bit of French and some fab Black British businesses – all of which felt very us.

I was in charge of the logistics and comms. Hadrien, my partner, was in charge of the decorations. We did incur some last-minute costs with a large gazebo purchase to make us rainproof and he did go to town on helium balloons, but it really made the garden feel special and not just like any other day.

We went to get the flowers locally from the high street just before being picked up by our neighbours in a taxi to go to the venue, which was a 10-minute drive away.

Our two children joined us after school and helped to cut the rainbow cake. They thought they were having a party just for them. We ordered in a bunch of grazing platters and were able to pack away in Tupperware a lot of leftovers for neighbours and covered Hadrien’s birthday, which was a few days later.

It was really lovely to just walk upstairs and sleep at the end of the night and not have to worry about packing a suitcase or travelling anywhere. I definitely don’t feel like I missed out by not having a big wedding. In fact, the intimacy and being able to just be with a few friends made it feel extra special.