The top priority of public policy must be to ensure there is no repeat of last summer's "fire tsunami", an event predominantly caused by climate change, NSW Transport Minister Andrew Constance says.

Nine months after huddling with a thousand others on a beach near Batemans Bay as fire fronts threatened from two directions, Mr Constance said it was time "to stop falling into the old trap of politics" and take serious action to mitigate climate risks. 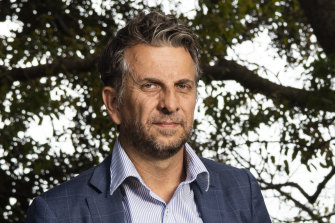 ‘We’ve got to dedicate the rest of our lives to change this’, says Andrew Constance, the NSW Transport Minister.Credit:Louise Kennerley

“We’re bloody lucky we didn’t bury thousands of people," he said, adding, “I’m going to dedicate the rest of my life to making sure this doesn’t happen again."

In the immediate aftermath of last season's bushfires, Mr Constance gave a number of emotional interviews and criticised the Morrison government's response. However, he steered clear of linking climate change to the severity of the event. 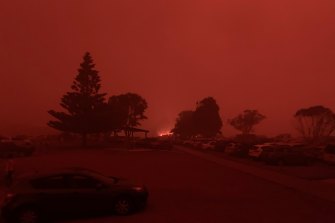 The scene during the height of the bushfires last January at Malua Beach, near Mr Constance’s residence. The minister return home in time to put out a fire that had begun on his verandah.Credit:Via Andrew Constance

"We lose 30 per cent in transmission – how stupid's that?" he said.

"We talk about tech roadmaps but there should be an absolute roadmap for making sure this event doesn’t happen again," he said.

Within his own portfolio, Mr Constance said one of his objectives has been to electrify the bus fleet.

"They’re noisy, they punch out toxins into our community which is bad to breathe and they're bad for the environment," he said. "It’s a bit of a no-brainer to do the transition."

The switch to electric cars would happen "organically but we need to speed it up", Mr Constance said.

As the MP for Bega, Mr Constance has also overseen his fair share of battles about logging in native forests, typically taking a stance in favour of logging over conservation. 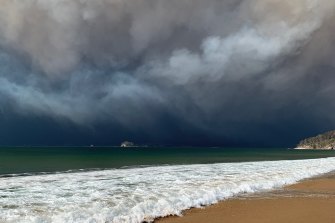 The view of the fire-generated storm over the Malua-Batemans Bay area as seen from about 20 kilometres away. “It was god awful,” Mr Constance said of his experience.Credit:Via Andrew Constance

After the bushfires, though, his view on this contentious subject may be changing too. Asked about whether Forestry Corp should reconsider logging in state forests the wake of the last season's fires, Mr Constance said "absolutely…it does need to be reviewed".

While private plantations could take up some of the supply slack, the effect of planting more trees along water courses would also need to be considered.

"The whole system needs to be examined," Mr Constance said.

"With climate change, we tend to look up at the atmosphere but we need to look at our vegetation, our soils and our water catchments," he said.