HERE are some of Britain’s worst energy-sucking kitchen zombies – ancient appliances that cost the Earth to run . . . literally. 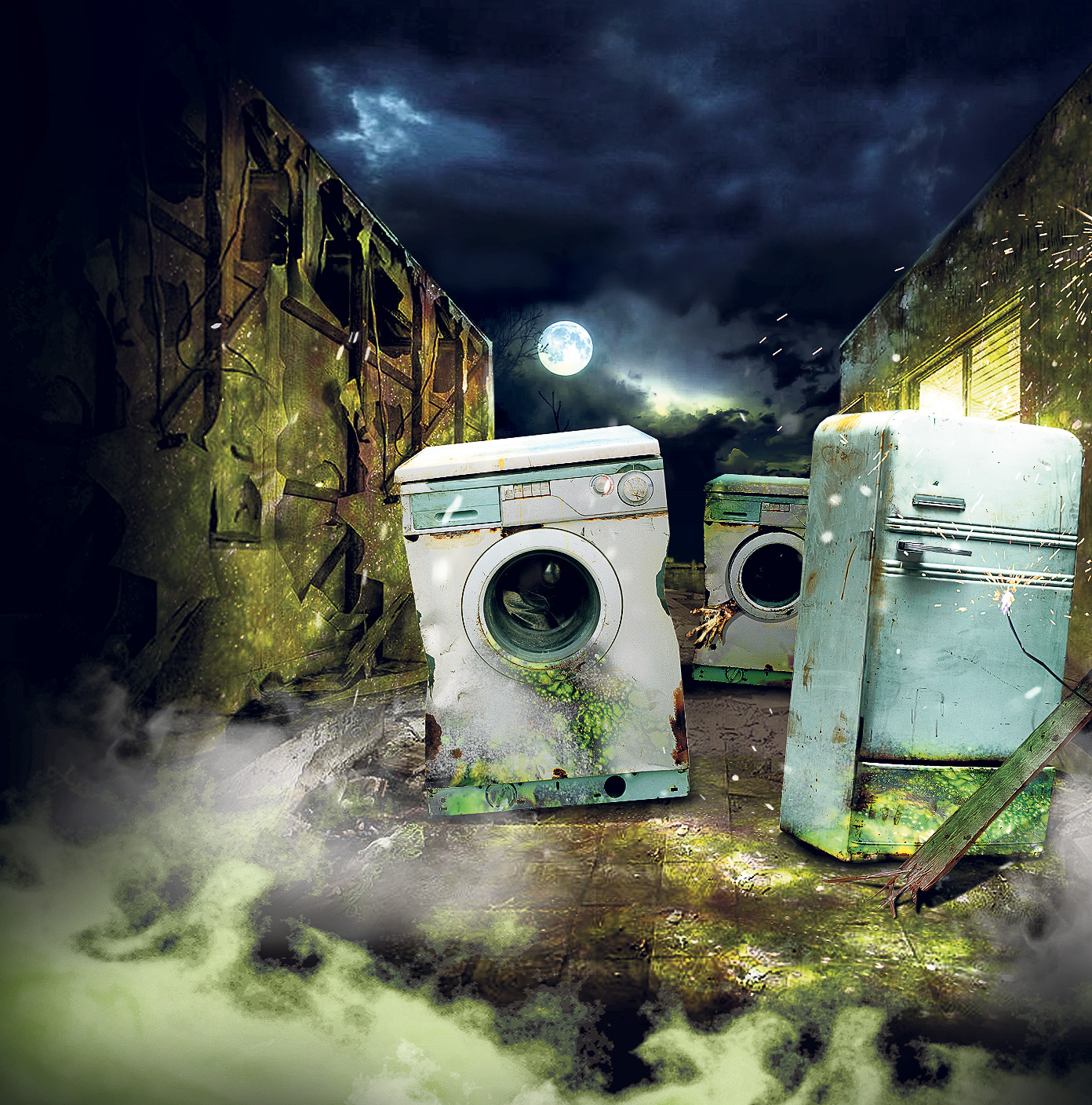 Some ten million washing machines, fridges, freezers and cookers, some almost 60 years old, should be extinct but are still in use.

An Eighties freezer and fridge combined cost around £150 a year more to run than new models, so the cost of buying an energy-efficient new model can be made back in a year or two.

The Sun’s Green Team wants to exterminate these zombies and Currys has stepped in to offer our Top 10 Terrors free replacements.

They just have to ditch their old ones, or send them to a museum.

Currys recycles and reuses 65,000 tonnes of old appliances a year, and it will pick up when it delivers the replacement. 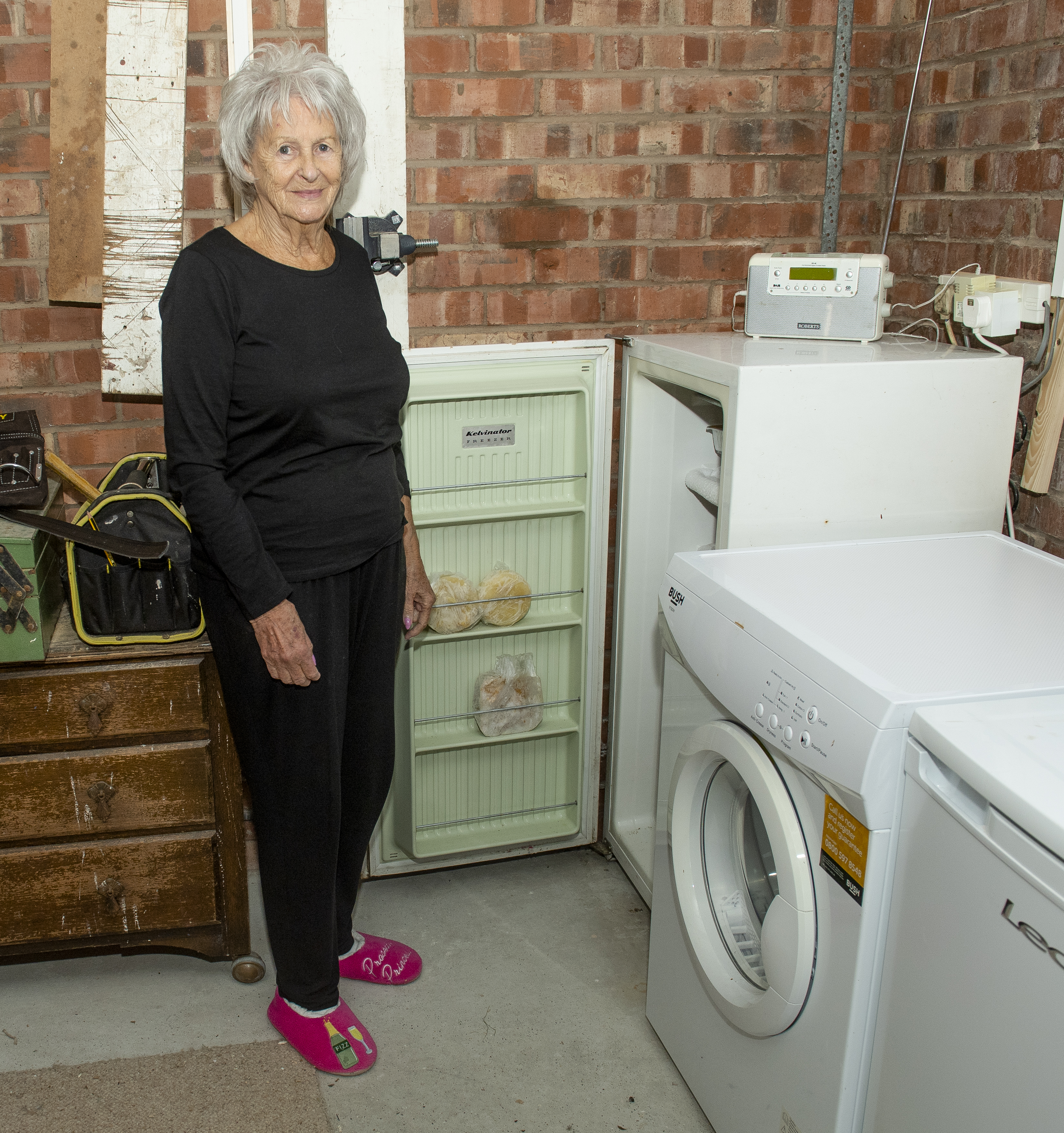 JANICE Swindlehurst’s chiller has been on the go for 57 years. And the Kelvinator freezer was free too – her partner was a fish-finger salesman for Birds Eye.

While it has never needing repairing, the 1963 appliance has cost her and the planet a packet.

The retired British Aerospace engineer, 82, said: “I’m shocked it costs so much more to run than a modern one – and I never knew about the carbon. I do other things to help save the planet, so I’ll keep the freezer while it works.” 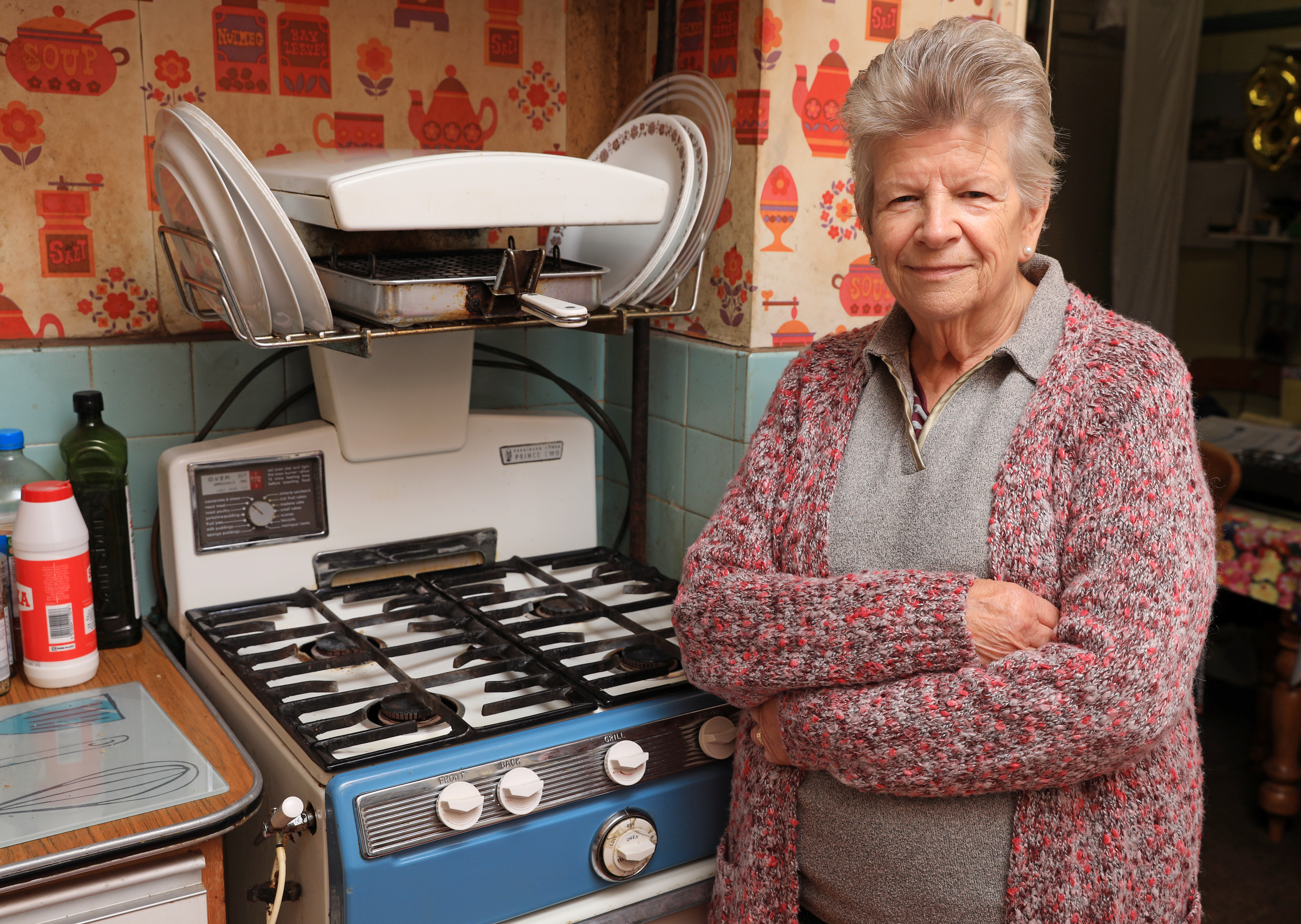 DOROTHY and Graham Cannon’s cooker has been going strong since England won the World Cup in ’66, and is now in extra time – lasting 54 years.

The Parkinson Cowan Prince Two cost £65 (£700 in today’s money) and the couple love the high-up grill and plate-warming racks.

ut ex-receptionist ­Dorothy, 80, and engineer Graham, 75, of South London, would save £50 a year on gas with a new cooker plus 125kg CO2 emissions annually.

And if they buy electric they would be even greener.

Graham said: “If a manufacturer replicates our cooker’s design, we’d happily buy it.”

RETIRED barmaind Wendy Mitchell’s children crack jokes about her Eighties fridge but her bills are no laughing matter.

She thought she had a winner in her Hotpoint Iced Diamond – a gift from son Paul in 1987.

But when Wendy, 75, of Malton, North Yorks, found out it cost £70 in electricity a year to run she was staggered.

“I’m surprised how much it cost and I now realise it produces a lot of carbon,” she says.

“The Eighties fridge is a family joke. “But it’s still the main fridge in the house. It is jammed full at Christmas and has never gone wrong.” 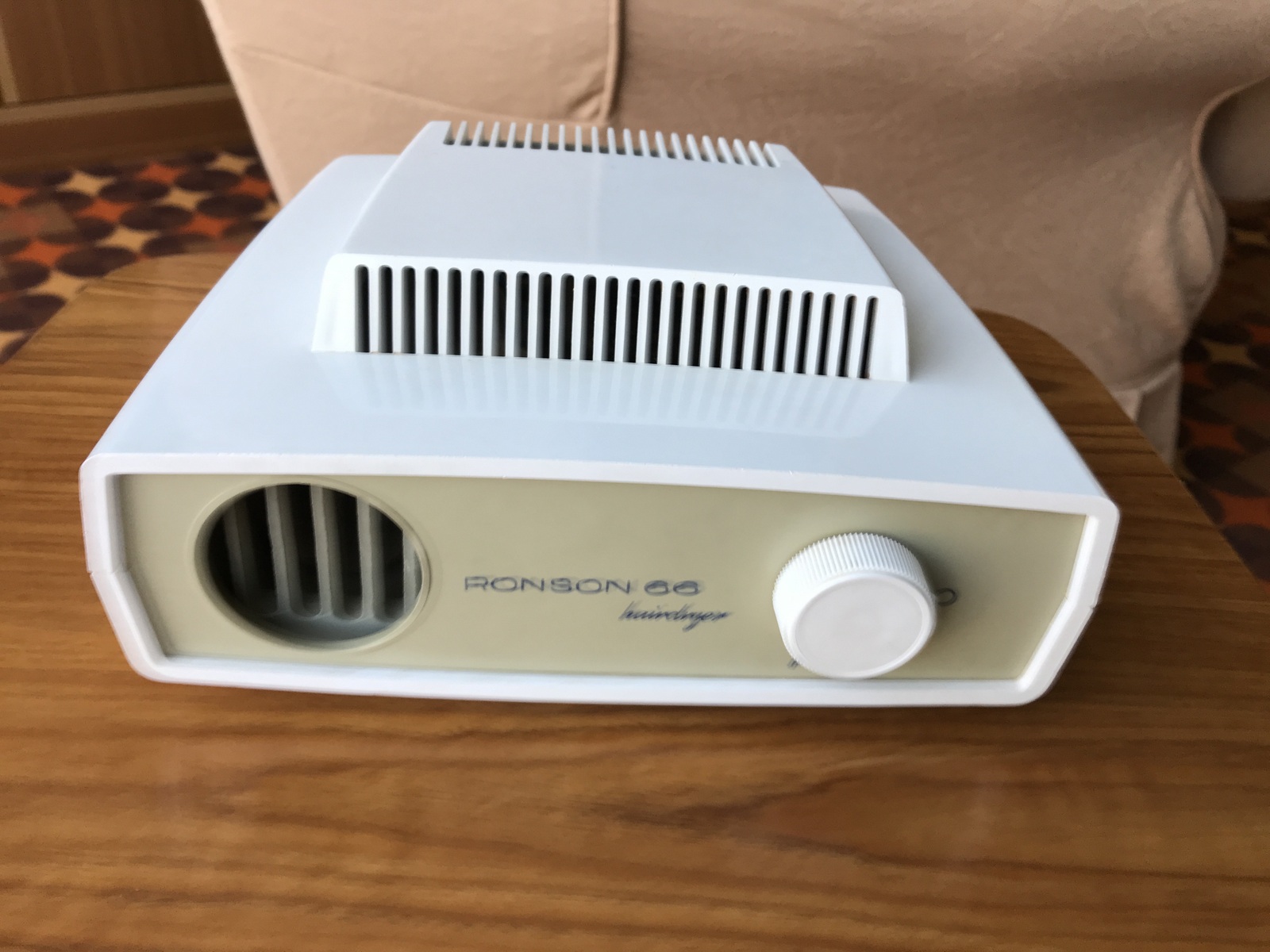 RETIRED West End show dressmaker Patricia Barker has been looking like a star for 55 years thanks to her bizarre 1965 hairdryer.

The 85-year-old, from Basingstoke, Hants, connects a 3ft-long hose to her Ronson 66 hairdryer box to dry her locks.

It costs her £9 more every year in electricity than a modern dryer would.

Her son David says: “Mum says it works exactly as when she first bought it. It might cost more money to run but modern appliances often go wrong.” 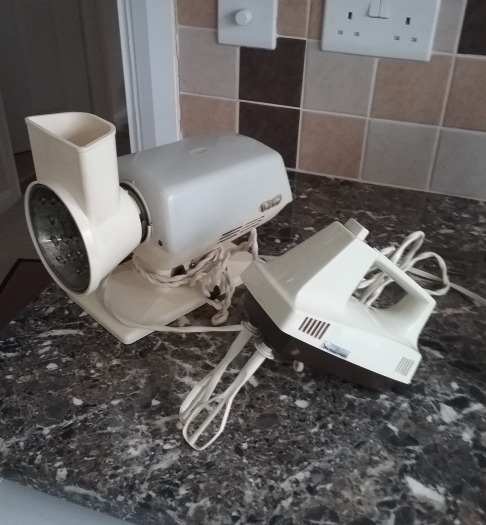 The 69-year-old was given the then state-of-the-art appliances as a 21st birthday present from her parents.

Sue, who lives in Chesham, Bucks, brushed off the £20-a-year extra electricity costs of the old appliance, saying: “It works perfectly and I don’t think it costs that much to run.

“There’s no chance of me buying a new one unless it breaks.” 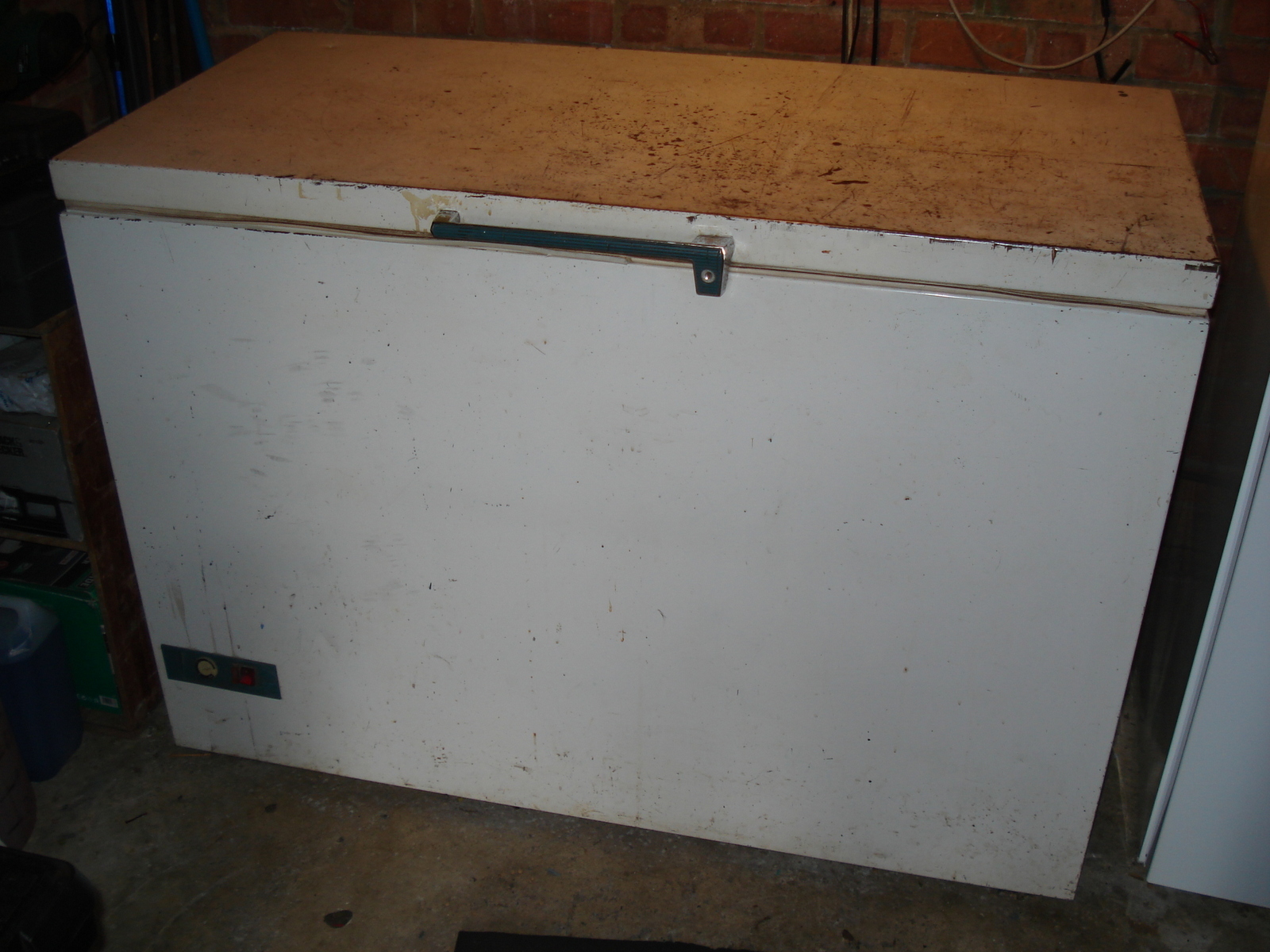 Half a century later, he and wife Diane, 78, are still happy with it – though it produces TEN times more CO2 than a modern freezer would do.

“It might produce more carbon but it’s never let us down and means we’ve been well stocked in lockdown,” insists Jarvis, from Wantage, Oxon. 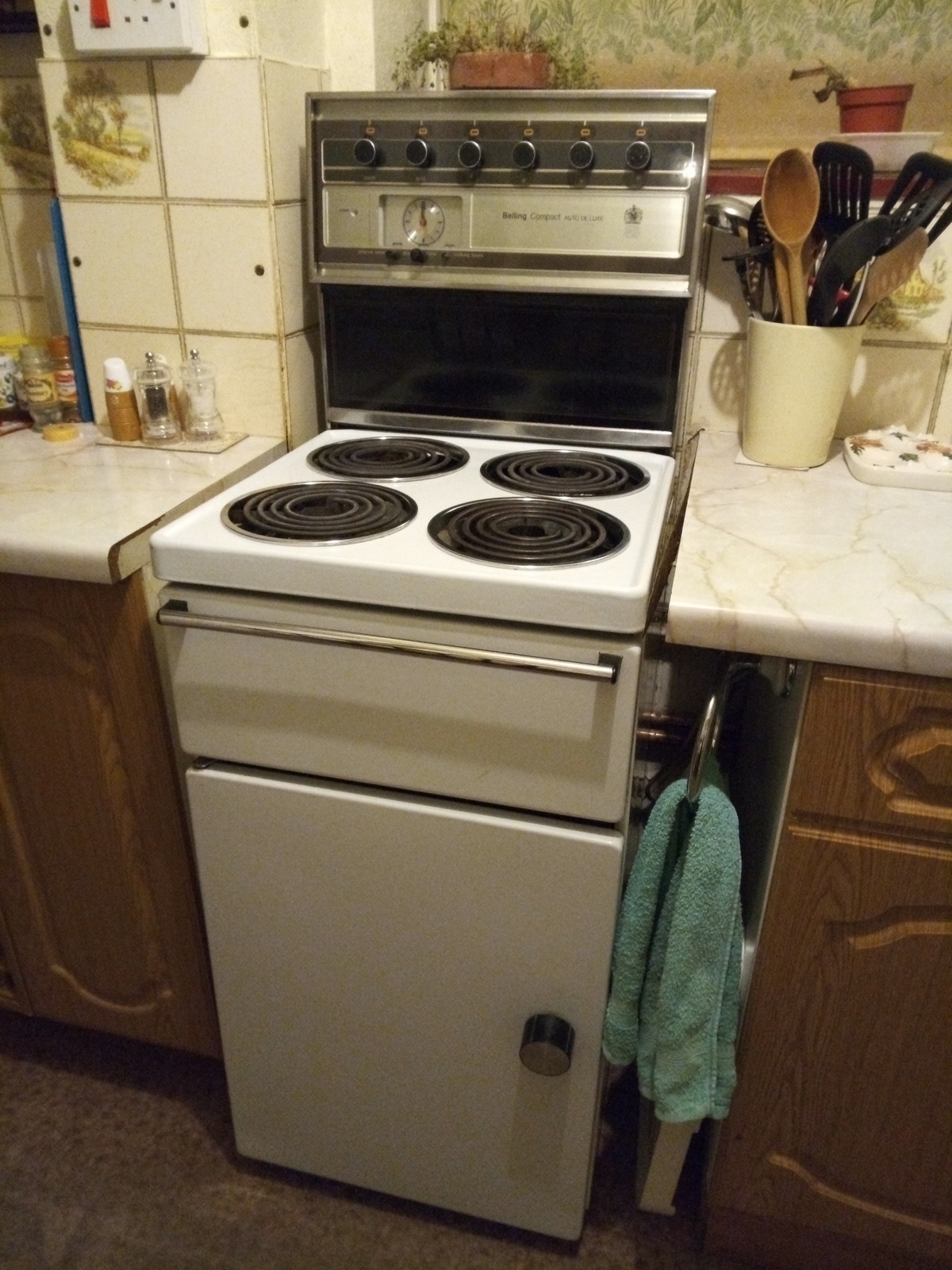 HER 1982 cooker means mum Jill Castle has a big gas bill – but she’s the sentimental type and has vowed not to ditch her wedding present.

Jill has been using the trusty Belling Compact Auto De Lux since she tied the knot with husband Peter.

Jill, from Ashford in Kent, said: “It’s probably not very efficient and our children say it’s ancient – but if it works, why buy new?” 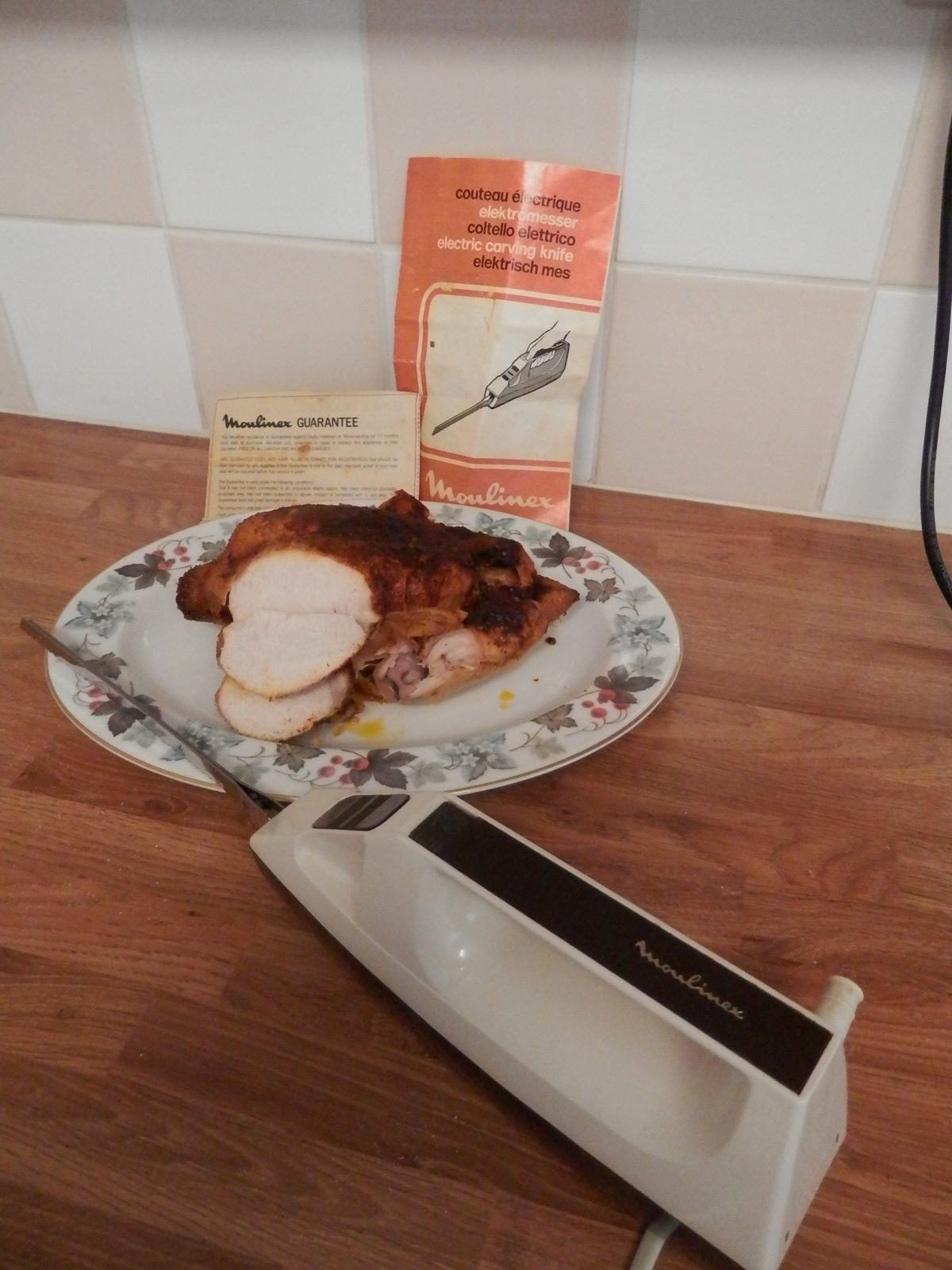 IT looks like a hand-held vacuum cleaner – but Brian Holmes uses this 1971 contraption to slice up his Sunday roast.

The retired insurance broker bought his mum the electric carving knife as a present.

Brian, 68, from Braintree, Essex, said: “My mum passed away in 1996 and I still use the electric knife every week.

“It only takes a few minutes so uses little electricity.”

He could save 1kg of carbon a year by using a normal carving knife. 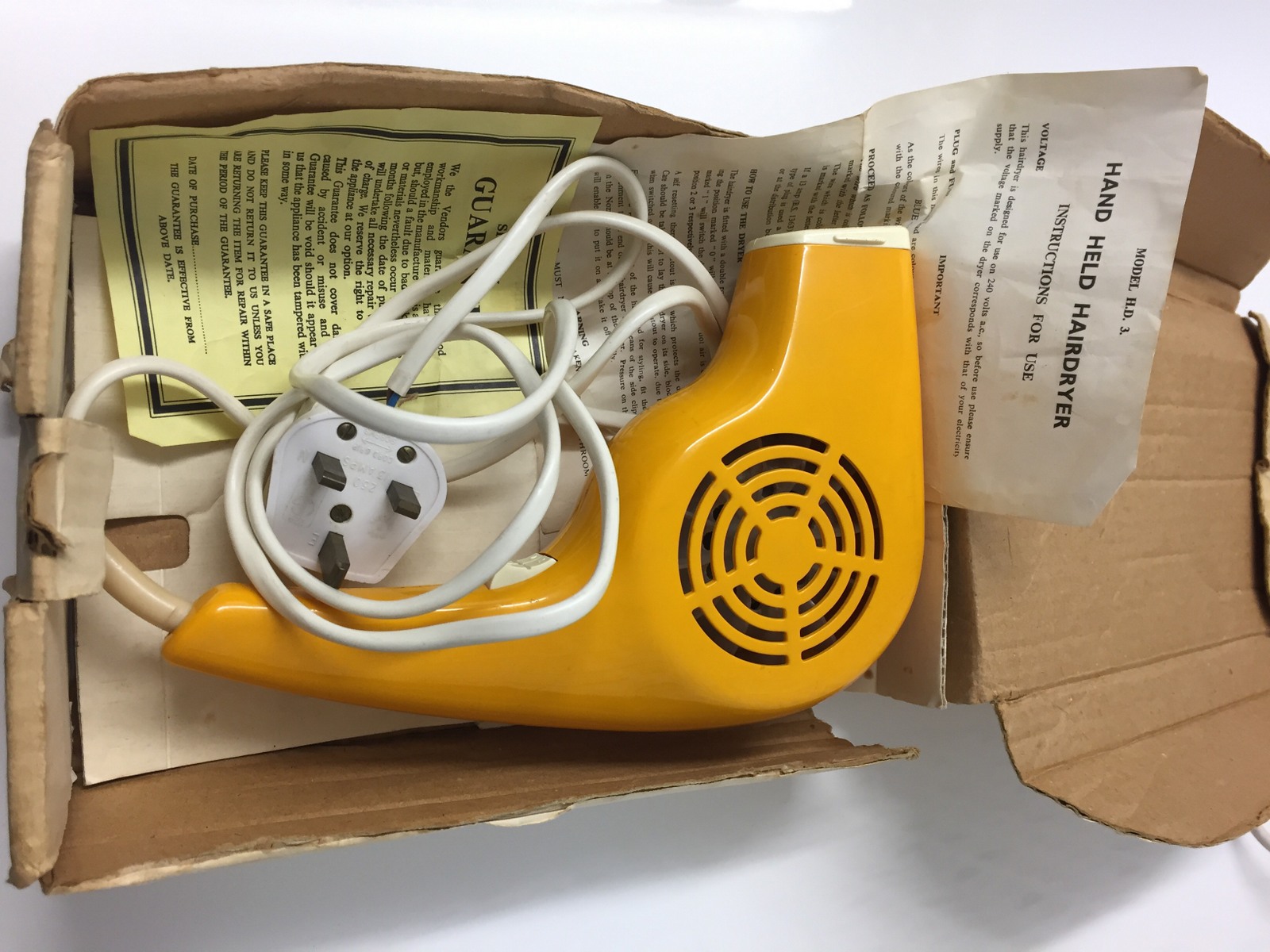 CAROLINE Wray’s very Sixties appliance was one of the first hand-held hairdryers – and is still blasting out hot air.

When her yellow HD3 was released, many women still dried their hair in full-head heaters like an astronaut’s helmet.

“It was my granny’s, then my mum’s. And it’s still going,” says Caroline.

She would save £10 a year with a new dryer producing 75 per cent less carbon. 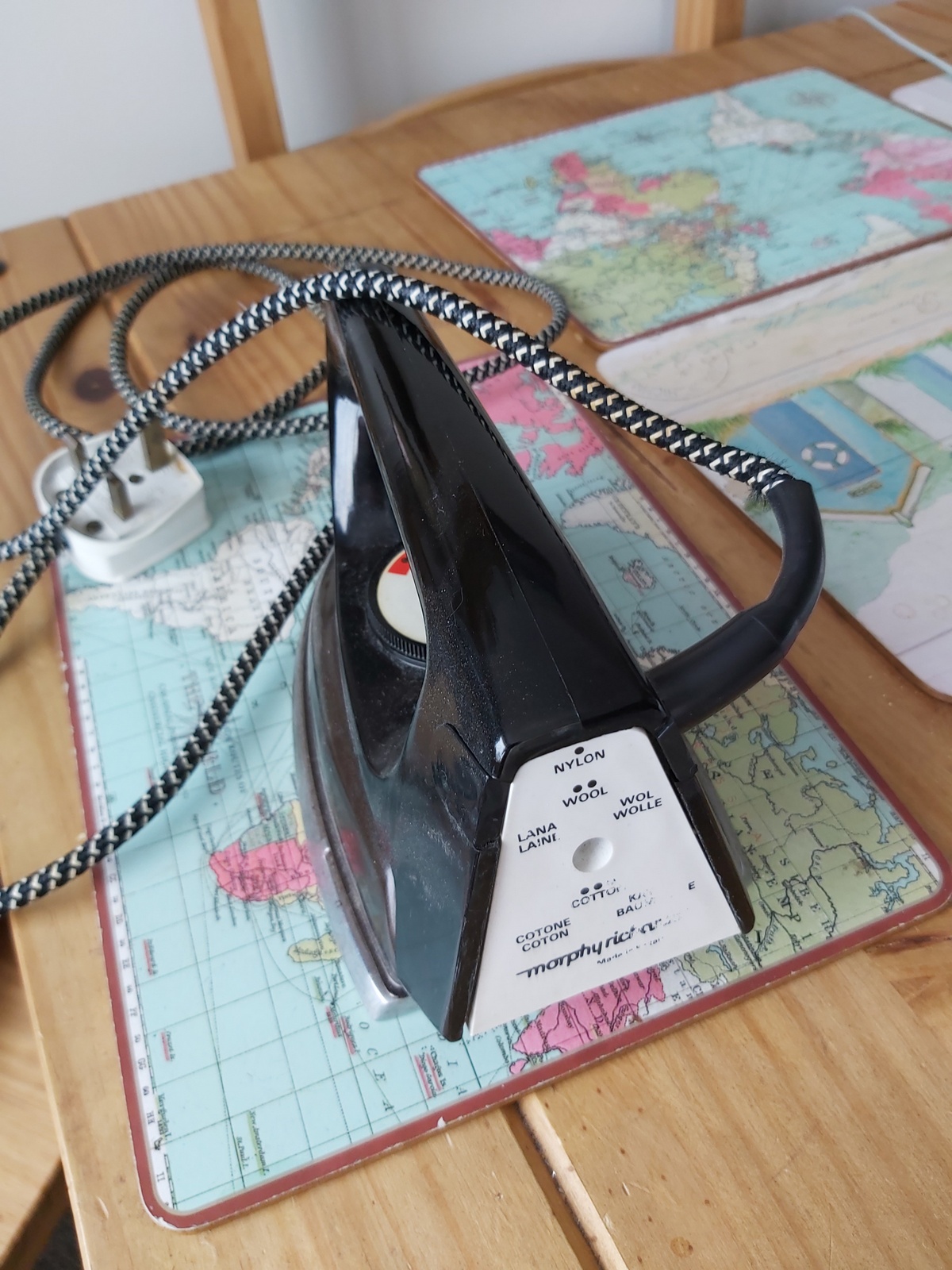 KEVIN Back and his wife Kathryn call their iron “Old Faithful”. It has steamed on even as more modern ones went up in smoke.

“It does produce some carbon but there was far more carbon produced making the modern irons that broke,” says delivery driver Kevin, 58, from Northfleet, Kent.

He and Kathryn, a 63-year-old supermarket admin worker, would save £20 a year in electricity if they used a new iron . . .  assuming it doesn’t break.

Join The Sun’s ‘Green Team’ & save the planet

MAKING simple everyday changes can add up to a BIG difference to the planet.

And we want you and your family to join The Sun's Green Team – our eco revolution.

It can feel overwhelming to know how to play a part in reducing greenhouse gasses, but we will be showing you the practical steps we can take to curb climate change – with the help of the global ‘Count Us In’ initiative.

And our easy measures will even help you SAVE money so your household budget goes further.

We want you to go online to sign-up to as many of our special Green Team pledges as you can manage and a special calculator will show you how much carbon you will personally save.

It won’t cost you a penny but the total you and your family will save will be added to the global ‘Count Us In’ total and the platform will support you every step of the way.

So tap here to pledge.

THE CALL CENTRE FULL OF TRICKSTERS

Beat the Scammers by Ashley Hart Head of Fraud at TSB 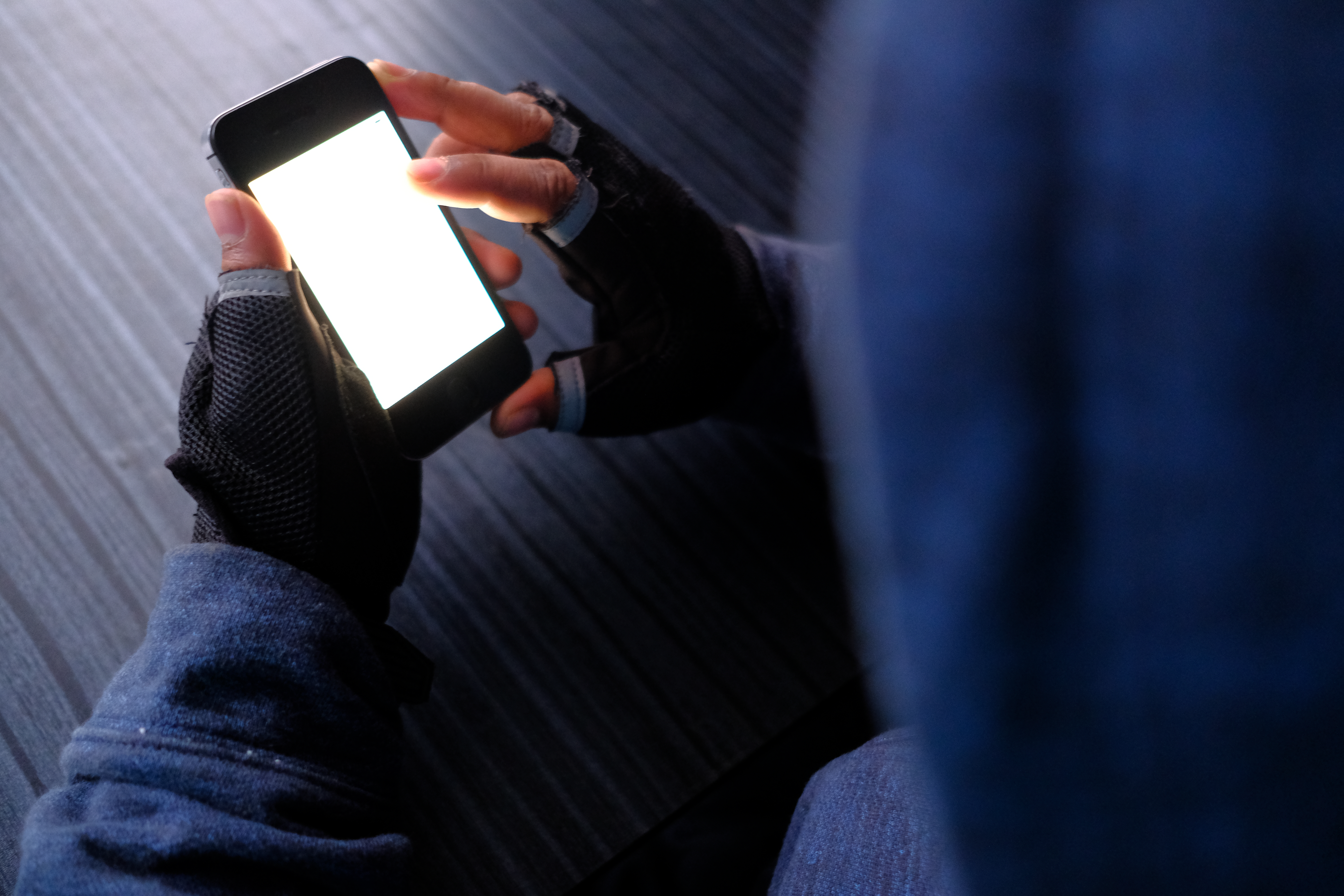 SCAMMERS are so motivated to steal your money that they set up like a big, legitimate firm – with a CEO, boards, recruitment drives, training and vast call centres.

You might think fraudsters are lone and opportunistic criminals but they are supremely professional gangs dedicating years to perfecting the art of conning you.

They set themselves up like any other business, with layers of management, recruitment and offices. They even have their own tech support and accountants.

When you get that call out of the blue, it’s probably coming from a big call centre – except these call centres are full of criminals, earning a living by stealing your money.

And they could be calling from anywhere in the world, despite showing a fake UK number on your caller ID.

Earlier this year, a similar investigation netted a kingpin behind another operation which had made more than 70,000 fraudulent calls.

One of my customers has just been tricked by one of these gangs. After being contacted by a scammer pretending to be from Microsoft, he was conned out of more than £10,000 when the criminals installed remote-access software on his laptop.

Despite slowing during the lockdown, this type of fraud is rising again – and fast.

Never download software on the instruction of somebody who has called you out of the blue, and never log into online banking if you have remote- access software running.

And when your phone rings unexpectedly, be extremely suspicious. Remind yourself that call centres packed with fraudsters exist – and their job is to steal your money.

TWO-bed houses have replaced studio flats as the most in-demand type of property for renters, according to a website.

The surge in demand is due to tenants looking for spare rooms to work from home in, Rightmove said.

Two-bed bungalows came second, while studio flats were eighth on the list in spite of them being the top preference a year ago.

The research also found the average asking rent outside London has hit a record high of £964 per month, driven by strong demand. 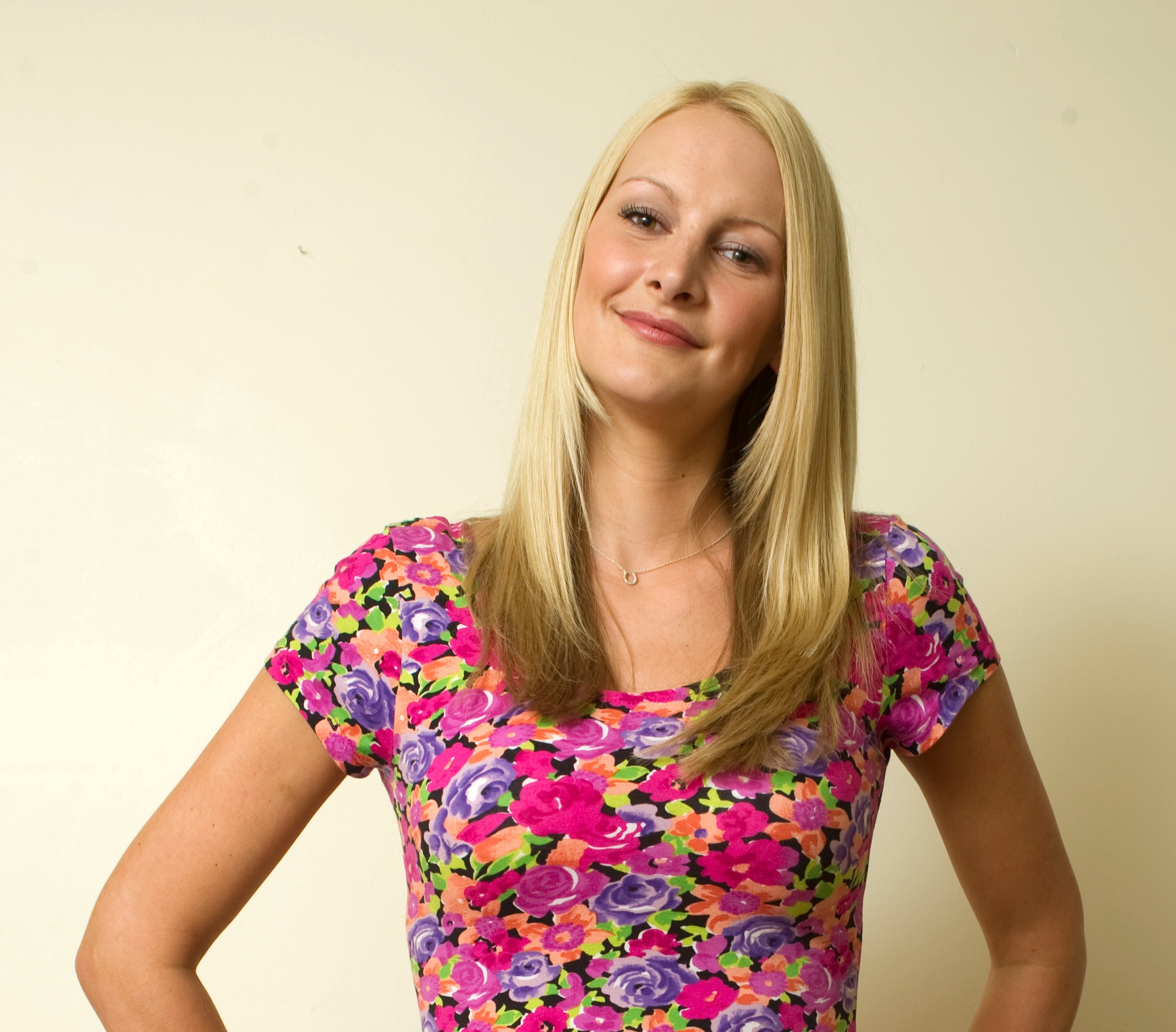 MY top five freebies this week are:

❶ SAVE 20 per cent at Vans with code VANS20OFF-B28MD-DG34U. Order at quidco.com for to four per cent cash back; bit.ly/vansquidco.

❷ Get 20 per cent off at Ann Summers with vouchercodes. co.uk; bit.ly/20annsummers.

❸ Save 30 per cent at Oasis plus an extra ten per cent off with code OASISEXTRA10 by October 31; bit.ly/oasis30vc.

❻ Save 15 per cent on any mattress from Mattressman with code mattress15 by October 31; bit.ly/mattressman15.

❽ Save 30 per cent off at Claire’s Accessories with code 2W3Q from Vouchercloud.com. Code expires Oct 28; bit.ly/claires30off.

❾ Get 50 per cent off orders from Photobox with code FLASH50 by Monday; bit.ly/photobox50.