Home » Lifestyle » What would your family miss most if you weren't there?

What would your family miss most if you weren't there?

In her debut novel author REBECCA LEY raises the intriguing question: What would your family miss most if you weren’t there?

Buy butter and salt. Wash football kits. Top up the dinner money credit online. Post that birthday card. My mind — like yours, I’m sure — is a daily spin-cycle of mundane tasks.

But in addition to this practical inventory, there is another to-do list. One I might feel embarrassed to write down and leave on the side in the kitchen, but which is, nonetheless, indispensable to the smooth running of our domestic life.

On it are the more idiosyncratic aspects of keeping our family-of-five show on the road; the little details which knit things together.

I believe that every family has such a shadow list, tailored to its particular quirks. And despite all the advances made towards equality, it’s more often than not women who make sure that these scarcely perceptible chores get done, seemingly able to hold more tabs open in their heads than men, possibly because that’s how they’ve been taught to approach life. 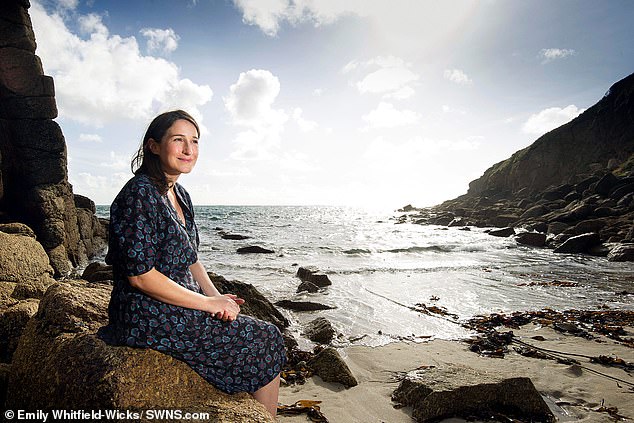 Rebecca Ley (pictured) explores the little things that knit life together in her debut novel, For When I’m Gone

I explore this idea in my debut novel, For When I’m Gone. My protagonist, Sylvia, has terminal breast cancer and writes a ‘manual’ for her partner to help him navigate life and parent their two young children in her absence.

It’s a slightly morbid premise, I concede. But this past year has underscored the inescapable truth that life is fragile and unpredictable, which is what makes our normal days so ineffably precious.

Sylvia can’t comprehend her impending non-existence, and she worries about who will perform all the seemingly insignificant tasks she does for her children, which nobody else will think to do, not even their devoted father, Paul.

Like washing her daughter’s lovey — her comfort toy — and rotating it with a spare, so there is always a back-up plan if one gets lost. Or getting down the gold rectangle of fabric from the loft to drape over a chair and make a ‘throne’ on birthdays. Or buying a particular brand of plastic cheese for her picky son.

Writing Sylvia’s list inevitably led me to think about what would be on my own, and I came to acknowledge the surprising tasks that don’t look like much, but mean a lot in terms of raising my children — Isobel, ten, Felix, seven, and Seb, five — and maintaining a family home.

Sylvia’s situation is very different from mine. She gave up her job as an embryologist to focus on motherhood, and her husband works long hours as a vet. In contrast, both my husband and I are journalists, and although he works long hours as a news reporter and earns more money than I do, we are equally committed to our careers.

But I do understand why Sylvia gave up work when she had her second child. The cost of childcare means that, at times, I’ve only broken even in terms of what I’ve brought in financially. And motherhood is so consuming; I can relate to wanting to give it your entire focus, while also understanding that such a commitment couldn’t work for me. 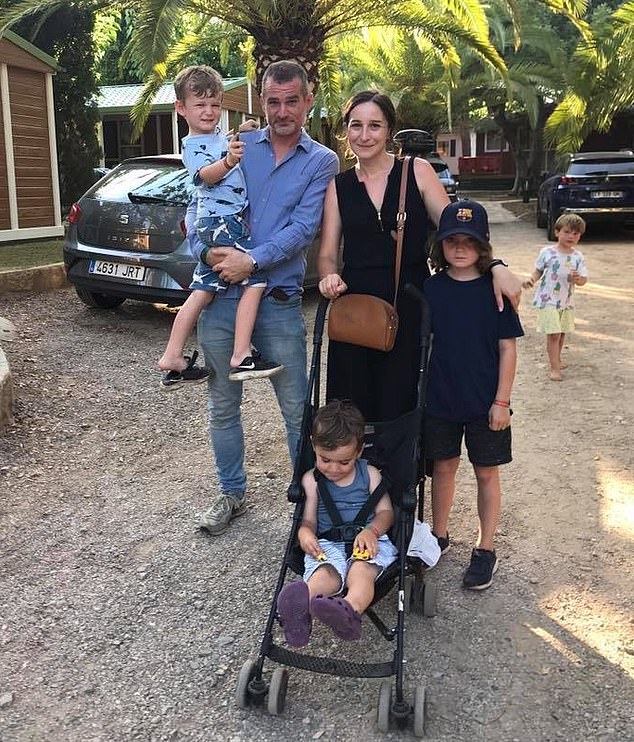 Rebecca said the labour in her home is split along the traditional gender divide. Pictured: Rebecca with her family

As it stands, my shorter hours (and probably the stereotypes wired into us by our own upbringings) mean that much of the labour at home is split along the traditional gender divide.

We have a cleaner to help us with a weekly blitz, but I do most of the cooking, tidying and washing, while he takes the bins out, keeps our car on the road and does the financial admin. Sometimes I gripe about how our respective roles have developed, but I also appreciate how lucky I am to be with someone who works so hard in every area of his life.

However, if I were in Sylvia’s position, I would definitely worry about how my husband would stay on top of the laundry. He used to take all his clothes to the laundrette before we got together, and, in the 18 years since, he hasn’t so much as turned the washing machine on once.

There are lots of other unseen jobs that I don’t think he realises I do and would certainly get forgotten if he were to be looking after three children on his own.

Some are sheer drudge. For example, once a week I use a wooden kebab skewer to remove the dirt from the back of our fancy copper hot-water tap; only wipe our temperamental metallic fridge with the very softest of cloths so it doesn’t scratch; and even use a toothbrush to remove the mould which threatens to bloom on the bathroom grouting.

Others are more personal. Such as massaging the small-but-stubborn splodge of eczema on Isobel’s left elbow with the specific brand of organic moisturiser that keeps it at bay, only available on one website, a task I’ve been doing every few days since she was six months old.

Each night before bed, I practise mindfulness breathing exercises with Felix, who is struggling with anxiety triggered by the pandemic. Then there’s remembering to give all the children their omega-3 fish oil supplements after dinner, especially the one who likes to play parkour indoors.

Other tasks extend into our wider social circle, such as inviting that couple over for socially distanced drinks in our back garden because, despite the months of social isolation, I know that it’s definitely our turn.

Or maintaining the web of texts with other school-gate mothers, as well as remembering where we are in the back-and-forth dance of playdates.

Since working from home during the pandemic, my husband has started doing the school run in the mornings. But once he begins work for the day, that’s it: he’s in the work zone. He doesn’t realise how lucky he is not to be on a single class WhatsApp group and has no inkling about the sheer volume of messages I get sent relating to our children in a single day.

And while he does help the children with homework after breakfast, it’s in a concentrated 20-minute blast, while I have to navigate a seemingly never-ending morass of different mathematics and online spelling accounts, as well as trying to push them on with their reading by putting the right books under their noses. 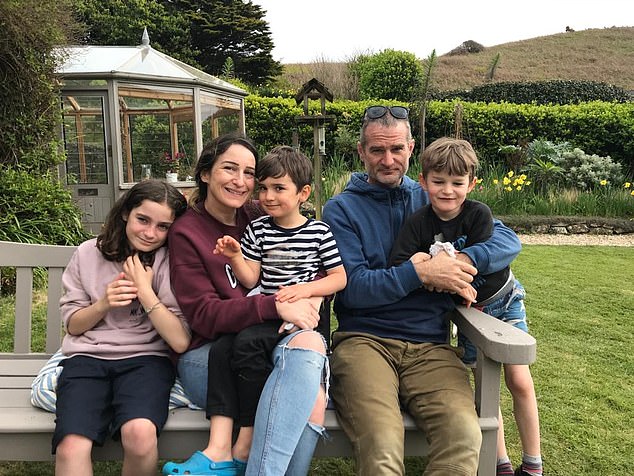 Rebecca and her husband have highly individual lists of micro-chores which keep their domestic plates spinning in the air. Pictured: Rebecca with her family

I even subscribe them all to a weekly comic to try and pique the curiosity of the child who is the least interested in books.

And then there’s the logistics, which my husband is largely blissfully unaware of.

Sending a birthday card is entry-level stuff — I know I’m not alone in keeping a ‘present drawer’ stocked with pleasing but interchangeable gifts for a last-minute child’s birthday party.

Every few months I spend an hour sorting through the felt tips and discarding the dry ones, then arranging the others in jam jars on the kitchen table for easy post-school doodling.

When filling out the weekly online shop, I order the kind of tangerines the kids can easily peel themselves, so we don’t end up with little cairns of peel everywhere. I maintain a burgeoning odd-sock float in a spare drawer to reunite pairs that suddenly reappear. 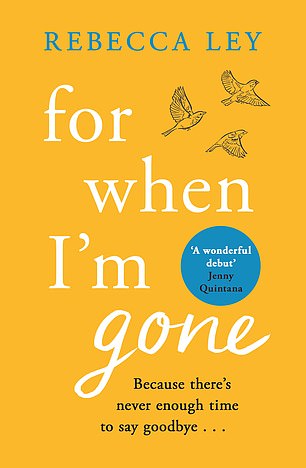 When it comes to culling the children’s toys so we aren’t completely overwhelmed (a task I try and do yearly), I’ve learned it’s best to do the charity shop run when the children are out of the house, otherwise they rugby tackle back items they haven’t played with for years, proclaiming them as their favourite thing ever.

It’s my job to anoint the back of our elderly tabby with flea lotion every month, order new school uniforms and place non-breakable cups for the children in an easy-to-reach low drawer so they can help themselves to water.

I make sure Felix doesn’t look at any pictures of mummies in his beloved book about Ancient Egypt past 4pm to minimise nightmares, and pin times-tables on the wall of the downstairs loo so they (hopefully) learn by osmosis.

We all have these highly individual lists of micro-chores which keep our domestic plates spinning in the air. Each of the tasks doesn’t take much time to complete, but they don’t ever stop either.

In the process of writing her manual, my character Sylvia starts to recognise this. She’s far from a perfect mother, and her husband Paul is the sunnier, more straightforward one.

Yet Sylvia comes to realise that, despite her faults, she has been doing something right all along, with all those tiny daily contributions that are a testament to how well she understands her children. She voices her more nebulous domestic input, the kind that women everywhere make without any outside recognition.

In writing her manual, Sylvia is also looking to stitch herself into her family’s future, to remind them of the hundreds of little things she did to show them how much she cared. Such jobs aren’t essential, but they add up to more than the sum of their parts: a mesh of effort that feels a lot like love, like mothering, like growing-up.

For When I’m Gone (Orion Fiction) is out now and is 99p on e-reader in May.