Home » Lifestyle » When will TV news stop scaring us to death over coronavirus crisis?

When will TV news stop scaring us to death over coronavirus crisis?

RICHARD LITTLEJOHN: When will TV news stop scaring us to death over coronavirus crisis?

Back in 2004, in the run-up to the U.S. Presidential election, I was invited to take part in a special edition of the BBC’s Question Time, live from Miami. Your Uncle Rich managed to cause uproar when I described my fellow panellist, the agitprop, anti-Bush, American film-maker Michael Moore, as ‘the Lord Haw-Haw of the War on Terror’.

To be fair, Moore took it well. Better than half the audience. ‘You’re outta line, buddy,’ was the mildest heckle I recall. They deplored my comparing Moore to William Joyce, aka Lord Haw-Haw, who spewed Nazi propaganda nightly during wireless broadcasts from Germany to Britain during World War II.

OK, so I was half-joking. But my serious point was that the Left seemed to be exploiting the post 9/11 landscape to score political points and undermine morale. Sixteen years on, the Western world is facing another deadly assault, which also appeared out of a clear blue sky.

Yet there are plenty of people in my own trade who are prepared to assume the role of Lord Haw-Haw in the war on corona­virus, feeding us a daily diet of death and defeatism. Television coverage has become unwatchable, as far as I’m concerned. I’m sorry, but at the risk of sounding callous, when you’ve seen one intensive care unit, you’ve seen them all. 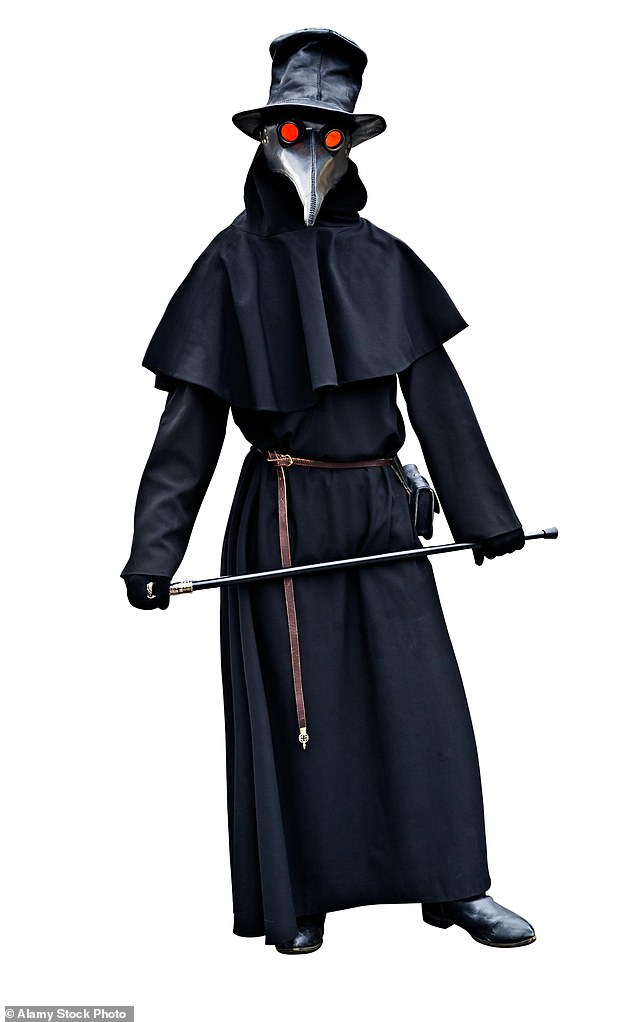 Stock image of a black plague doctor costume with a cane

When they’re not trying to scare us all to death, the broadcasters are trying to pin the blame on the Conservatives, even though no one saw coronavirus coming. This week’s Labour Party Political Broadcast masquerading as an objective edition of Panorama on BBC1 was a particularly appalling example.

In yesterday’s Mail, Guy Adams brilliantly exposed the disgraceful way in which this flagship current affairs programme paraded a procession of far-Left Labour activists to attack the Government’s record on the provision of PPE. It’s a legitimate enough story. I’ve highlighted the PPE shambles in this column.

But Panorama fatally undermined its own credibility by failing to disclose the partisan political affiliations of the allegedly impartial ‘doctors and nurses’ taking part. Similarly, no news organisation has done more to highlight the crisis in care homes than this paper.

And, with your generous support, we’ve launched the Mail Force campaign to source protective gear from China. But we’ve done so in order to get these problems addressed urgently — not to trash ministers doing their best in difficult circumstances.

Broadcasters have seized on the care home story, however, as yet another stick to beat the Tories. Yes, as I wrote last week, it would help if ministers were prepared to show a little more humility and admit when they don’t know the answer to some of the more difficult questions.

But some grandstanding TV presenters and reporters seem more obsessed with claiming another scalp than seeking the truth, let alone solutions. They appear to view coronavirus as a career move, an opportunity to do for them what Prince Andrew did for Emily Maitlis.

Most depressing of all are the rolling news channels, constantly updating the death toll and trotting out tearful interviews with bereaved relatives on a neverending loop. Look, I’m not in any way attempting to diminish the devastating toll the loss of a loved one inflicts on their relatives.

People must be free to grieve in their own way. I’m not convinced, though, that encouraging them to pour it all out on TV is the most dignified way of going about it. Still, this is probably just another manifestation of the way our national character has changed post-Lady Di.

We have swapped the stiff upper lip for the trembling lower lip — and not in a good way. If modern TV news had been around in 1940, we’d have been treated to hourly updates on the number of soldiers, sailors and airmen killed in action. Talking heads would be wheeled on to accuse the Government of deliberately deflating the true figures by not including civilian deaths on the Home Front.

Ministers would be berated for failing to provide vital equipment to the troops and refusing to say definitively when the war was going to end. Imagine the effect that would have had on morale. So it is hardly surprising to discover that is exactly what is happening today, as a direct consequence of the doom and despondency being broadcast round the clock.

It only serves to crank up the fear factor. My heart sank when I read the survey this week which reported that more people in Britain were in favour of staying in lockdown than in any other country in Europe. Who needs Lord Haw-Haw?

A warning that we were about to be hit by a giant asteroid this week proved wide of the mark. But not before thousands of people stormed supermarkets panicbuying tubes of Preparation H. 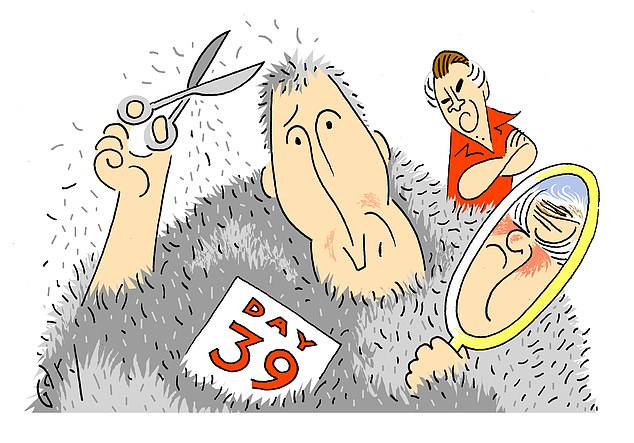 Don’t get me started on nasal hair, ladies

Women are understandably pining for their hairdressers, as their roots run riot, but we chaps have our own tonsorial troubles. Admittedly, some of us don’t have much hair to start with, so we can cope with a month or two’s absence from the barber’s chair. It’s the pesky, forgotten hair which has come back to haunt us. I’m talking, at least in my case, of ears and eyebrows.

Harry, my barber, takes care of business every two or three weeks without me even noticing. But with Harry currently in lockdown, I peered into the bathroom mirror a couple of days ago to find Mrs Thatcher’s former PR man Bernard ­Ingham staring back at me. Eyebrows?

They looked more like a Battle of Britain Squadron Leader’s handlebar moustache. I immediately set about them with a pair of my wife’s nail scissors. By the time I’dfinished, there was enough debris to fill a small duvet. Meanwhile, my wings have gone white. At this rate it’s only a matter of time before I’m mistaken for Paulie, from The Sopranos.

Nothing can dampen the British passion for fancy dress, which has been a regular feature of this column over the years. There’s no limit to the inventiveness of some enthusiasts, or their determination to move with the times. Norfolk Police have just put out a tweet seeking information on a man or woman who has been seen stalking the streets of the village of Hellesdon, dressed as a medieval Plague Doctor. No doubt, someone else is already putting the finishing touches to their new Grim Reaper costume. Bring on the Oompa Loompas! 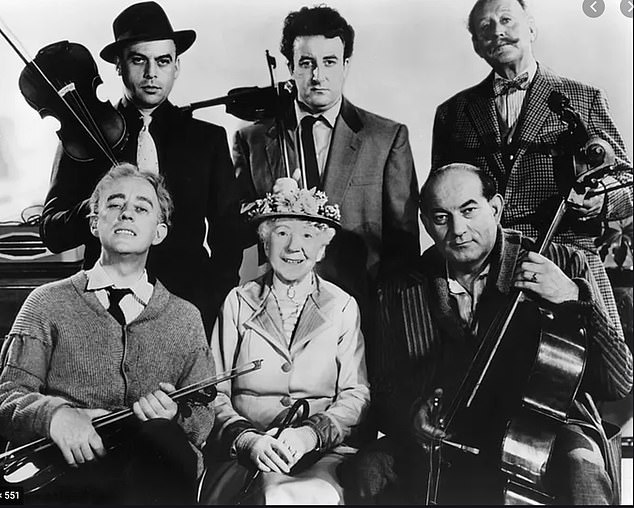 A picture from The Lady Killers 1955, a British black comedy crime film

Today’s edition of Mind How You Go comes from Bayswater in West London. For the past few weeks, a family of musicians has entertained their neighbours with an impromptu classical concert in their front garden.

But on Wednesday, as the Todes family string quartet were performing a little light Shostakovich, the Old Bill arrived and told them to stop playing, as it may encourage people to congregate in defiance of social distancing regulations.

Well, that was the original story. It turns out that the officers were actually questioning them in connection with a security van robbery in King’s Cross, believed to have been carried out by a gang known as The Ladykillers…