Home » Lifestyle » Whisper it, I don't have a best friend!

Whisper it, I don't have a best friend!

Whisper it, I don’t have a best friend! From films to fiction, having a sisterly soulmate is seen as a rite of passage for women – bestselling author Joanna Cannon begs to differ

There. I said it. Whenever I confess to this (because it really does feel like a crime these days), people avert their gaze, shuffle their feet and look embarrassed.

I’m not sure if they’re embarrassed for me or embarrassed for themselves, because the thing is with best friends (rather like giant televisions and swanky mobile phones) everyone appears to have one, and if that relationship hasn’t happened for you at some point during the course of your life, you’re made to feel a little, well, inadequate.

Thanks to movies and television, from the heady days of Thelma and Louise and The Golden Girls, to the joys of Miranda and Fleabag, we are swimming in the idea that every woman should have a BFF, and entire, long-running TV shows have been based on the premise of someone always being ‘there for you’.

Not only will your best mate meet you after work for a glass of wine, help you to finish the last piece of pizza and hold your hair back as you kneel in front of a loo, they will also act as a soothsayer, a confidante, a gatekeeper for your Very Big Decisions. You may not always see eye-to-eye, but at the end of the day you’ll forever stand in each other’s corner, because you’re best mates. And your best mate knows you better than you know yourself. Or does she? 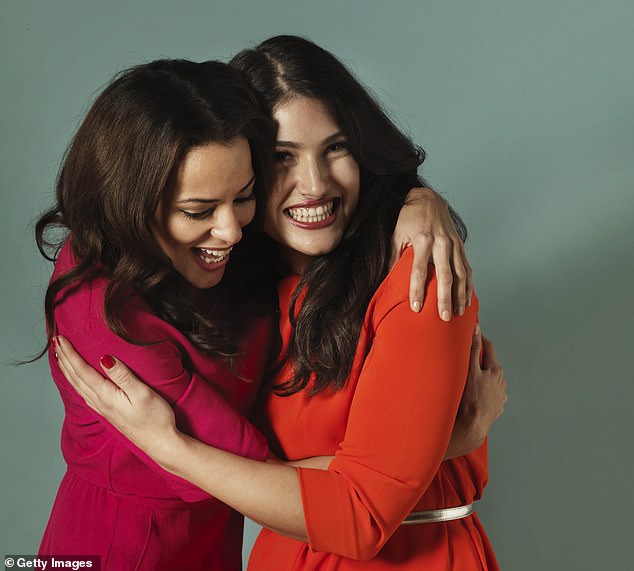 Joanna Cannon explains that she has had temporary friendships but has never developed a close friendship like those we see on TV e.g. Thelma and Louise

I’m not sure I buy into this Necessary Friendship idea. In fiction, it is a great plot device, because it allows a main character to explain to someone else (and us) how they’re feeling. But in real life, I’m not sure I believe it exists quite so widely.

It certainly doesn’t exist in my life. I’ve had romantic relationships lasting from a few weeks to over a decade, but that’s very different from a big friendship, and as an only child of an only child, with no children of my own, I can’t even make up the numbers with family.

As a single woman, l­iving alone, friendships would appear even more important, but regardless of anyone’s relationship status or housing arrangements, society would have us believe that close female friends are the glue that holds our life (and our sanity) together.

Of course, I’ve had casual friendships along the way (and very lovely ones), but they happened because we were temporarily glued together by external circumstances, by university courses or work. Once the course ended or the job changed, we drifted apart and now only wave to each other occasionally over social media.

Social media itself has become an interesting substitute for forming face-to-face relationships. Working from home, I can go an entire week without having a single in-person conversation, but online I will speak at length, and often in depth, to many hundreds of complete strangers. I’m not sure if a virtual friendship is a sad and inevitable product of modern times or a complete and utter blessing, I just know I was very grateful for it during the long and lonely months of lockdown.

I was used to being a one-woman army from a very young age. A huge fan of solitary pursuits, most of my friends lived within the pages of a book and at playtime I would usually wander off by myself to sit underneath a tree and think about life in general. To be honest, it’s still something I do most days with my dog. 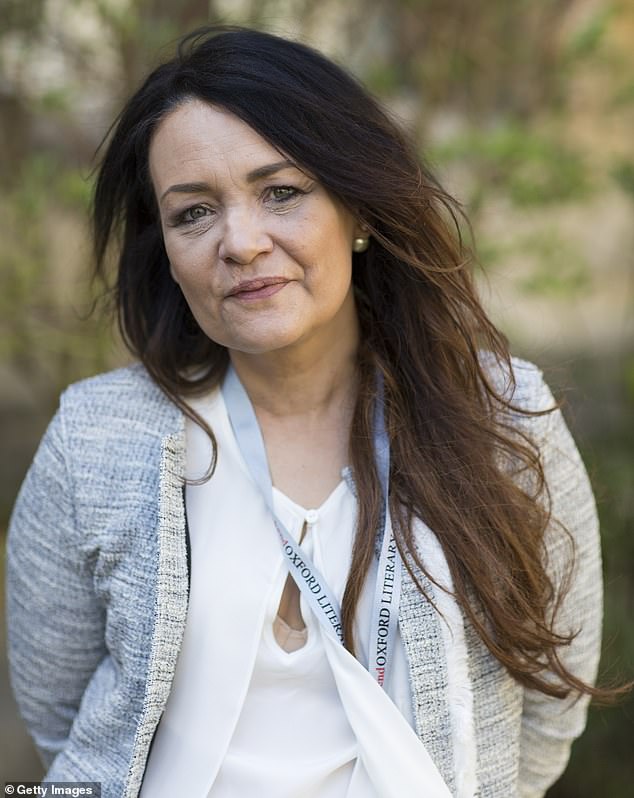 Joanna (pictured) says that she never got the hang of the socialising. She says at medical school she was surrounded by friendly, engaging, interesting people but was too busy studying to make friendship- memories

In our early years, carefully constructed situations are put in place to help us learn to socialise and make friends — afterschool clubs and weekend activities, huge birthday parties involving an entire (and often unwilling) class of children — but as we get older, it’s assumed we’ve got the hang of it and those structures fall away.

I never really did get the hang of it. Whether it was lack of confidence or fear of rejection, my ability to make friends failed to materialise and I remember spending most of my playground breaks pretending to be all three Charlie’s Angels because I couldn’t find the courage to ask anyone else if they wanted to join in with me.

Teenage years, with their Mean Girls unwritten rules and endless whispering, were an even bigger mystery to me and I found it much easier to drift, unnoticed, further towards the periphery. Before I knew it I had arrived in adulthood without a single friend.

At medical school, I was surrounded by friendly, engaging, interesting people, but we were far too busy studying and trying to get through finals to spend time making friendship-memories, and our first doctor jobs after graduating sent us all in completely different geographical and speciality directions. It didn’t really bother me, this friendless life. I prided myself on my ability to go to the pictures alone or choose a dress without first asking someone else’s opinion, however there were occasions when it really did catch up with me. 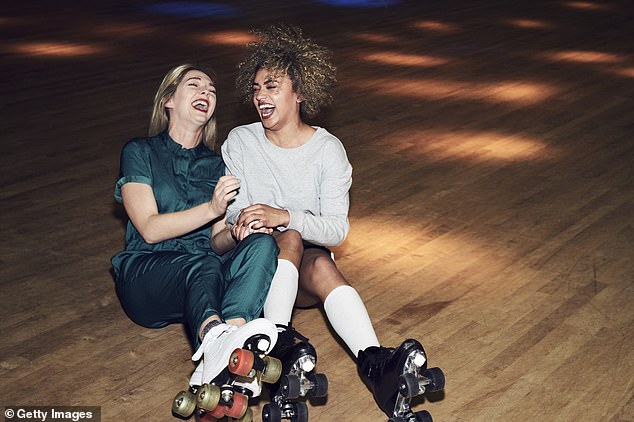 She was surprised when someone pointed out to her that all of her books feature a strong female friendship. Her debut novel was about two ten-year-old girls, Grace and Tilly, who set about trying to find a missing woman during a heatwave

At 41, a small surgery involved me being given midazolam (a strong sedative) and required someone to drive me home and sit with me for a few hours, but there was no one to do it, so the surgery couldn’t go ahead.

The next year, when my father was diagnosed with advanced cancer, my mum rang from the outpatient clinic to tell me and I tried to be very calm and measured for her benefit.

The minute the call ended I picked up the receiver again (in the days of old-fashioned telephones) to ring someone I could panic to… only to realise I didn’t have anyone to ring. These experiences were isolating and distressing, but they were also few and infrequent. Perhaps, though, the media myths and society’s unspoken rules about needing a friend had permeated my brain more than I realised.

I was at a literary event a few years ago and a member of the audience pointed out that all my books feature a strong female friendship (something, to my surprise, I hadn’t considered). My debut was about two ten-year-old girls, Grace and Tilly, who set about trying to find a missing woman during a heatwave.

‘When you were a child,’ said the woman in the audience, ‘did you have a friend like Tilly?’ Everyone turned to me. Out of the blue a lump began to form in my throat, and there — on a stage in front of a hundred strangers — the past caught up with me. ‘No,’ I said, very quietly. ‘No, I didn’t.’ 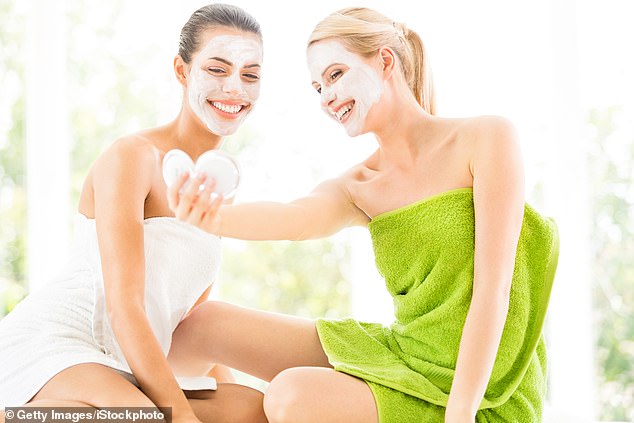 I thought about that question — and my reaction — for the entire drive home. Why didn’t I ever manage to form any friendships? Wasn’t I good enough? I thought I’d make quite a nice friend for someone, but perhaps I wasn’t entertaining enough?

Or maybe I was too needy, too desperate? Perhaps if I was more aloof, dozens of people would flock to me, desperate to be my best mate?

These questions travelled my brain until I pulled up in my driveway, and then the final (and most important) question settled itself in my mind. Perhaps I am OK just as I am?

We are, most of the time, happily OK. More than that, we are enough, content, perfectly adequate. But if we’re bombarded with covert messages that our lives should be lived a certain way, and anything less is a failure, eventually our minds will react.

Now, not only are we required to have a 26 in waist and perfectly arched eyebrows, but we must also possess a friend on the Rachel-Phoebe-Monica level of female bonding.

My dad’s belief was that if you made one good friend during the course of your lifetime, you had done very well for yourself, and I think I’m more inclined to believe my dad rather than Hollywood producers. Besides, I am, like most writers, an introvert who loves people.

If you do manage to make a valuable and lasting friendship, then I salute you, but those of us who don’t, dance to an equally valuable tune.

Besides, we’re skilful and if needs be, we can adapt. We can be all three Charlie’s Angels.