Home » Lifestyle » Who'll find love on our blind date? This week it's Lindsey and Darren

Who'll find love on our blind date? This week it's Lindsey and Darren

Who’ll find love on our blind date? This week it’s Lindsey, 40 and Darren, 44, but will romance be on the cards? 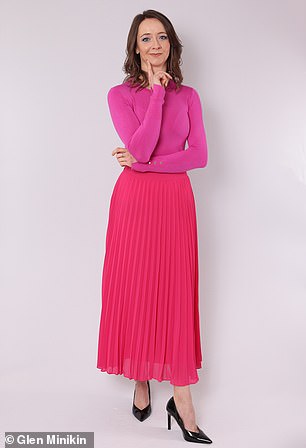 Lindsey, 40, (pictured) is divorced and has two teenage daughters

I was in a relationship with the father of my children for 15 years, and married for five of them. Since we split, not much has happened in my love life, especially during the pandemic. I had an on-off relationship over a couple of years, although it was more off than on.

On reflection, I seem to attract the wrong people, those who aren’t respectful to women, have a tendency to lie and only want one thing. While I’m not looking for a ‘bad boy’, I haven’t been attracted to the nice guys who have asked me out.

Divorced with two daughters, aged 19 and 13.

Someone I can relax with, who is willing to make time to do things together and has good manners.

I was most nervous about finding the restaurant, but looking forward to trying a new venue.

I arrived first — just. I pipped Darren to the post by seconds. He was shown to our table and even though he looked nervous, he was welcoming. Darren was wearing a beige polo top with navy chinos, and has nice hazel brown eyes. He told me he’d gone shopping for an outfit, which I thought was sweet.

He has a beard and showed me a photo of himself without it — he suits the beard better. I’m usually attracted to dark-haired men — with more hair.

Easy To Talk To?

Darren’s had an interesting life; he used to be in the Armed Forces and that’s how he got invited to have afternoon tea with Princes William and Harry at Buckingham Palace. He told me about his current work for the NHS and how he wants to go into counselling.

We talked about destinations we both want to go to — my top two were Poland and Ireland, where Darren has been. His were the Maldives and Disney World in the U.S. (for his son) — I’ve been there.

Liked? Darren is easy to talk to.

I ordered a burger. It was very messy. Perhaps it wasn’t the best choice for a date.

No, even though Darren has got a lot of qualities I like. He loves the theatre, going on holidays and is a family man. But there was no romantic attraction for me. I just didn’t fancy him — sorry, Darren.

I’d see him again as a friend.

What do you think he thought of you?

Darren was impressed that I like my food, and that I love red wine and nice cheese.

Darren is a genuinely caring and thoughtful guy. Yes, my friends would like him.

Divorced five years ago, with a son, 11.

Someone who likes holding hands, cuddles and kisses, who doesn’t take herself too seriously.

A few. I told my friends about the date and one came shopping with me for a new outfit. I know I’m a nice bloke, but so much is about appearances nowadays.

Lindsey was wearing knee-high boots with black trousers and a floral top. She looked fantastic and I told her so. My usual type is curvy, but Lindsey is slim and attractive. Lindsey stood up and we went in for a hug; I gave her a kiss on the cheek, too.

Easy To Talk To?

Yes, the poor waitress had to return twice to take our order. I chose pork cheek, which came with rhubarb. We laughed about it because it sounded such a weird combination, yet it worked perfectly. As Lindsey knows her wine, I was happy for her to choose a Malbec. We also discovered we both have the same taste in cheesy films and are big fans of Love, Actually and The Holiday.

Lindsey trying to eat her burger. It was huge and in the end she had to cut it into four pieces.

Liked? Lindsey is such a lovely woman.

After we had finished our meal, I thought I’d push my luck and see if Lindsey fancied going on for a drink — which she did. She chose a wine bar nearby.

At the end of the evening, I asked Lindsey if she’d like to meet again, but she said she saw us as friends only. While I was attracted to her, I don’t think there was enough chemistry for Lindsey. She’ll make someone very happy though.

I gave Lindsey my number. She texted me immediately afterwards thanking me for a lovely time. A friend told me women don’t give out their number to just anyone, so recommended I play it cool and give it a week before fixing up another drink, which I will.

What do you think she thought of you?

That I am a decent bloke who took an interest in her.

Yes, it’s hard not to like Lindsey. She is good company.

Fancy a posh meal with an eligible single like you? Or would you like to play Cupid for someone else? Email your — or their — details and a photo to [email protected]