Home » Lifestyle » Why Australians are still waiting to come home

Why Australians are still waiting to come home

COVID-19 has exposed many weaknesses in Australia's federation but nowhere is this more glaring than the debate over the failure to get Australians home by Christmas.

On September 18, Scott Morrison said he wanted to "get as many people home, if not all of them, by Christmas", a line that has stuck in people's mind. 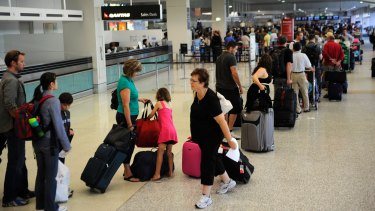 Thousands of Australians will not make it back to Australia by the end of the year.Credit:Pat Scala

In truth, Morrison has not broken a promise. Since then, more than 32,000 Australian citizens and permanent residents have returned home – 8000 more than were registered at the time.

But in that time the worsening international situation has increased the size of the problem. Three months ago there were about 24,000 Australians wanting to return home. Today that number has blown out to about 39,000.

Before the Victorian hotel quarantine debacle, which sparked the state's second wave and sent the state into a four-month lockdown, Australia was on track to bring home every citizen and permanent resident who wanted to return.

Had there been no Victorian second wave the state would have been able to keep its hotel quarantine program running and it would have processed 70,000 returning Australians. In other words, everyone currently registered as wanting to come home, plus another 31,000, could have returned.

When Victoria made the decision to suspend its hotel quarantine program, the other members of national cabinet should have stepped in to fill the void. Instead, they ran scared.

The cap of 4000 international arrivals a week imposed by national cabinet in July derailed any chance of getting all Australians home in 2020.

While other states and territories should have immediately lifted their quarantine places, the Commonwealth could have moved faster to dispatch repatriation flights and to open the Howard Springs facility on the outskirts of Darwin.

Howard Springs did not reopen until October 23 – more than a month after a review by former Health Department secretary Jane Halton made the recommendation and four months after the Victorian second wave hit.

The problem is worsening because the global pandemic is not getting better. Many Australians now on the register of those wanting to return have been overseas for years. Stuck in COVID-19 hot spots and with employment prospects drying up, these Australians now want to come back.

Senior figures within the federal government are unsure whether the problem will get any better in the new year. They say after vaccines start rolling out, there might not be such a rush to return to Australia.

But they also accept it could get much worse, which is why Morrison has for months been pushing the states and territories to open up more quarantine spaces. While the states have moved a bit, they have not moved enough.

The creation of the national cabinet was meant to empower the federation to deal with exactly these kinds of issues. Because of the emergency measures agreed to by national cabinet – including mandatory hotel quarantine and strict border controls – Australia has avoided the worst of the pandemic.

But on the question of getting Australians home, national cabinet has failed.