No. 9 Wisconsin has canceled its game at Nebraska on Saturday and paused all team activities for at least seven days after a dozen people within the program including coach Paul Chryst tested positive for COVID-19. School officials said athletic director Barry Alvarez and chancellor Rebecca Blank made the decision in consultation with Big Ten officials. The game with Nebraska won’t be rescheduled.

“This morning I received the news that I had tested positive via a PCR test I took yesterday,” Chryst said in a statement. “I informed my staff and the team this morning and am currently isolating at home. I had not been experiencing any symptoms and feel good as of this morning.” 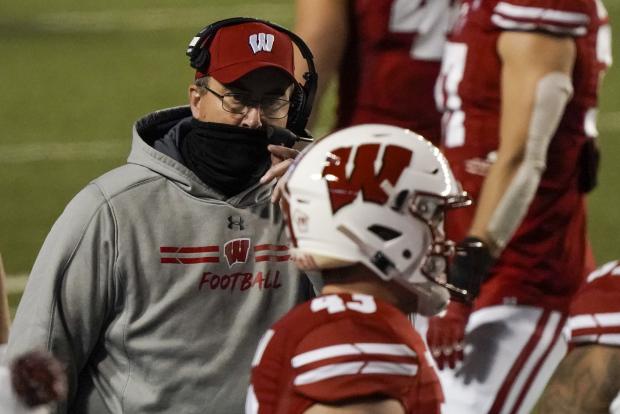 Wisconsin already had lost 2019 starting quarterback Jack Coan to foot surgery that has left him out indefinitely. The Badgers’ only other scholarship quarterback is junior Danny Vanden Boom.

“I am disappointed for our players and coaching staff who put so much into preparing to play each week,” Chryst said. “But the safety of everyone in our program has to be our top priority and I support the decision made to pause our team activities.”

Wisconsin’s governor said his state is facing an “urgent crisis.”

“There’s no way to sugarcoat it—we are facing an urgent crisis and there is an imminent risk to you, your family members, your friends, your neighbors, and the people you care about,” said Governor Tony Evers.

More than 10,000 people are hospitalized due to COVID-19 in his state, and over 5,200 new cases were reported on Tuesday.