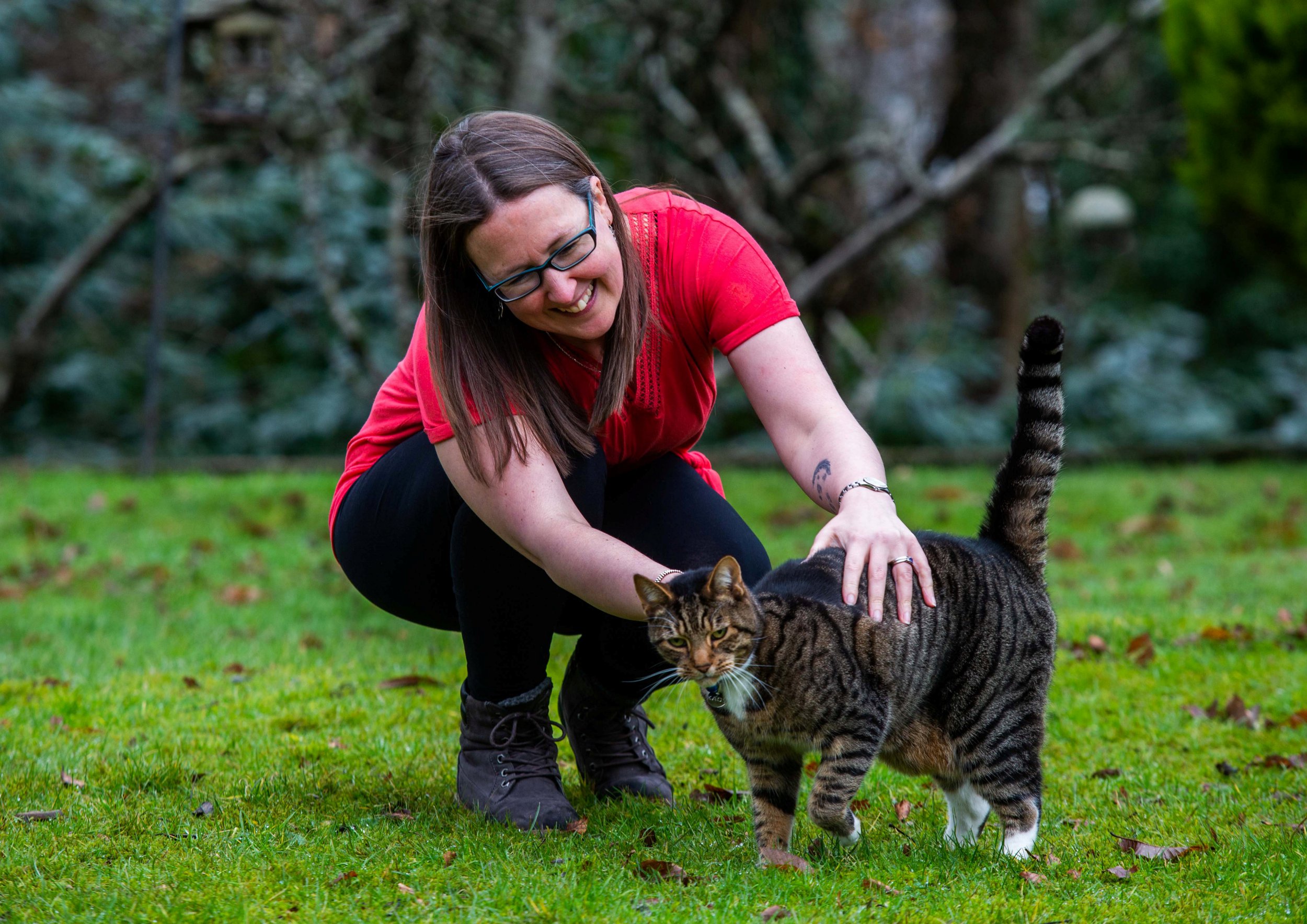 Julie-Anne Thorne used to work as a civil servant, but has quit that day job to work full time as a cat whisperer.

Julie-Anne, 38, decided to be a cat behaviourist after discovering she has a remarkable ability to emotionally connect with felines.

She describes herself as ‘cat intuitive’, and says that by sitting down with a pet, or even just looking at a photograph of the animal, she can pick up the kitty’s emotions.

This helps her to understand why a cat is behaving in a certain way, allowing her to coach its owners to help the pet feel more comfortable.

She ditched her corporate job as a civil servant last year in order to pursue her dreams of educating cat owners and now runs her business, Naturally Cats, full time.

Julie-Anne said: ‘I can’t explain the science or the logic behind it because it is more of an emotional and energetic connection between myself and the cats.

‘It’s almost like there is a connection between our feelings when I see them. You can get behaviour cues from looking at cats, but I feel more than that.

‘When I connect to my breath and to the moment and stop all the noise of day to day stuff that goes through my head, I am able to feel how the cat feels.

‘All of a sudden, I might become angry or I might feel scared – that’s what the cat is directly feeling, it’s not just my interpretation. I can actually feel it within myself.’

Julie-Anne, who lives in Plymouth, Devon, says she realised that she had a strong connection with cats after visiting a zoo with her husband Rob back in 2012.

Stopping at a large cat enclosure where a cheetah lived, Julie-Anne was suddenly overcome with sadness and began to cry.

It wasn’t until later that day that the couple found out that the cheetah had just lost their mate and was grieving the male’s death.

Julie-Anne said: ‘As I stopped near her, I just burst into tears.

‘I realised I had been feeling her sadness and her grief which is why I had cried.

‘It led me to explore an empathy side of things and over the years, I’ve realised that I can connect with cats energetically and emotionally.’

Inspired by wanting to help her own cat, Pickle, who suffered with feline diabetes, Julie-Anne trained in complimentary alternative treatments such as reiki and animal healing.

She set up her business, Naturally Cats, in 2019 and now helps people with cats who have shown problem behaviours, such as aggression or urinating around the house.

She has since helped around 40 clients in a one-to-one setting, charging £195 a consultation.

These sessions involve Julie-Anne tuning into how the cat is feeling and picking up on behavioural clues.

Then she gets owners to introduce their pets to different dried herbs, which she says can help.

For example if she senses the cat is feeling angry, she prescribes a mix of hops, jasmine, rose buds and valerian root.

Depressed cats get angelica root, St John’s Wort flowers and lemon balm, and a bereaving kitty is recommended a mix of yarrow and linden flowers with some lavender.

Clients can send video clips of their cat being introduced to one of her herb gardens so Julie-Anne can explain the behaviour cues.

‘They can pick up our stress and anger and then that changes their behaviour.’

Julie-Anne has faced scepticism in her line of work, even from the clients who have hired her, but she hasn’t let that stop her from pursuing Naturally Cats full time.

She’s now on a mission to educate people on how to give their cats love and support in the best way.

‘I think part of what I’m doing is educating people,’ Julie-Anne said. ‘If nobody has heard of using remedies with cats, they’re not going to believe that it works until they see it for themselves

‘I had one client whose partner just laughed in my face when I suggested using remedies for their cat but they’ve since seen how much it has helped and they’re thankful for the connection they now have with their cat.

‘My mission is no small dream. I want to change the world’s perception of cats – they are heavily misunderstood animals.

‘People think that they are aloof and do silly things but it’s actually just that we don’t fully understand their behaviour.

‘I sell the herbs that I use online and people are seeing them help their cats in a really positive way. I want to help people understand how they can connect with their cats.

‘In my eyes, there’s so much information out there about helping dogs and I have nothing against dogs, but I want there to be more help out there for cats and to give cats a voice.’