Woman urges against having treatments without taking a patch test

Eyebrow lamentation! Woman urges others to always do a patch test as she reveals horrific allergic reaction to lamination treatment

A woman who developed a horrific allergic reaction in the days that followed a beauty treatment is urging people to take a patch test to avoid having the same experience.

Millie Bucknall from Warwickshire, revealed how an allergic reaction to an eyebrow lamination gradually worsened in a viral video posted on TikTok.

She posted her video to warn her 5,954 followers of the importance of getting a patch test at least 24 hours before getting a beauty treatment. 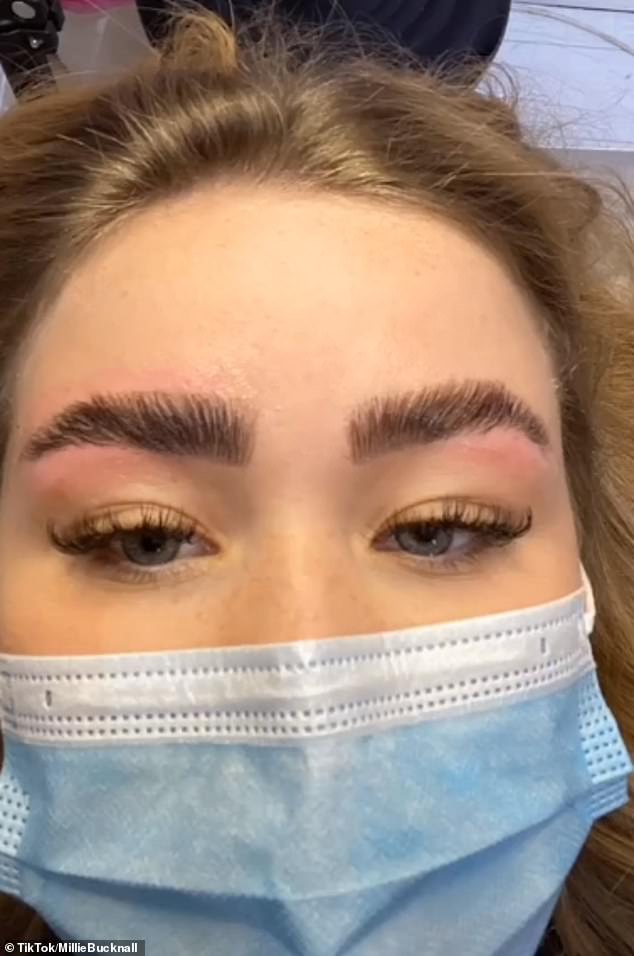 Millie Bucknall from Warwickshire, revealed the dangers of having a beauty treatment without first taking a patch test in a clip shared on TikTok. Pictured: Millie on first day of treatment 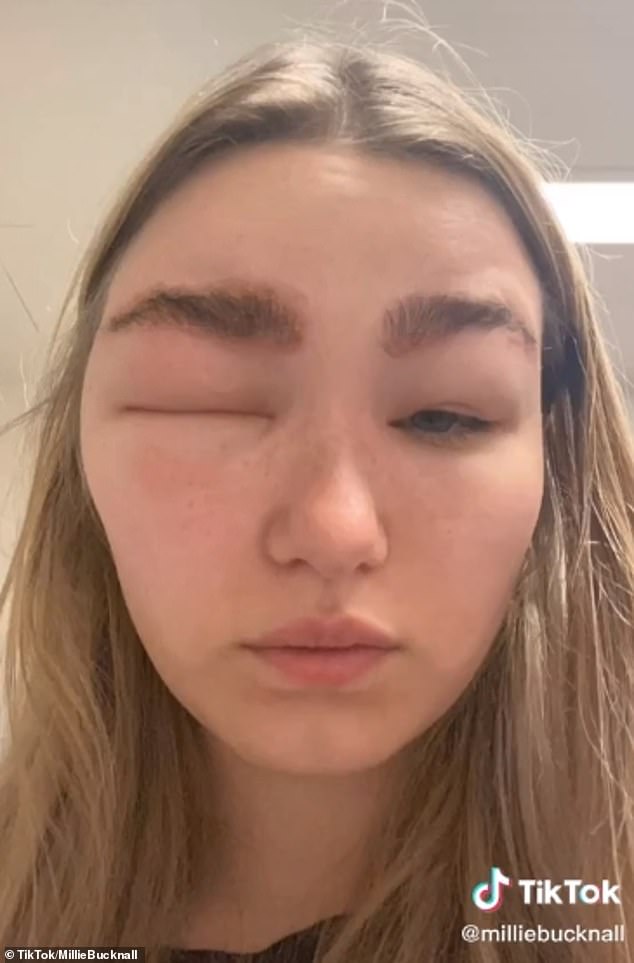 Millie who has almost 6,000 followers, had an eyebrow lamination treatment at an undisclosed salon. Pictured: Millie in the days after treatment

The footage shows a series of progress photos taken in the days following Millie’s initial eyebrowlamination.

Developed in Russia, eyebrow lamination is a chemical treatment that gives the illusion of fuller brows for up to six weeks.

It has grown in popularity throughout the UK as an alternative to microblading.

Millie’s video shows her eyebrows looking full and framing her face after the initial treatment, however her satisfaction soon turned to horror when her skin started glowing red and become encrusted in scabs.

She revealed how the allergic reaction caused both of her eyes to swell, with one complete unable to open.

The beauty enthusiast who was forced to go to hospital to treat the condition, urged others to get a patch test to avoid a similar fate, in a post captioned,’ my journey so far currently eight days since my eyebrow lamination’. 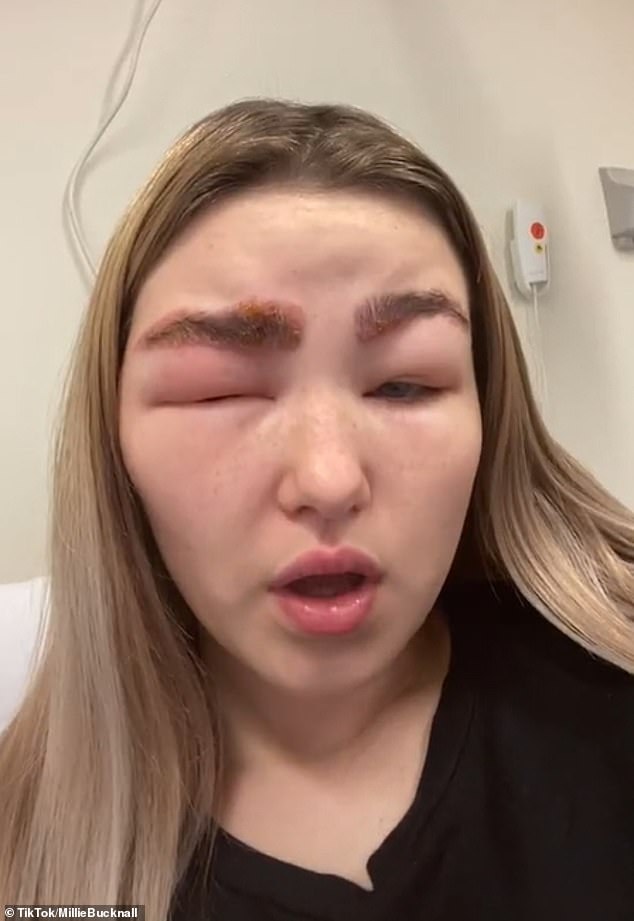 Eyebrow lamination promises the illusion of fuller brows for almost two months. Pictured: Millie in the days after her treatment 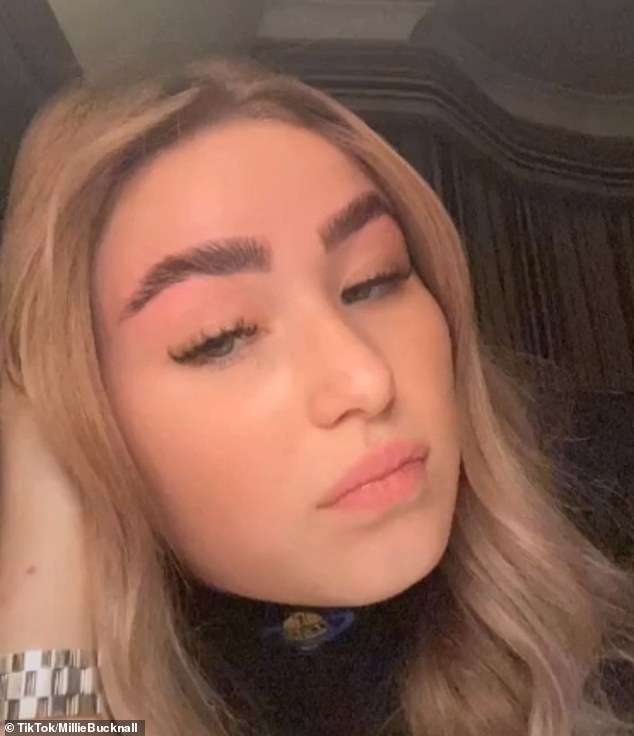 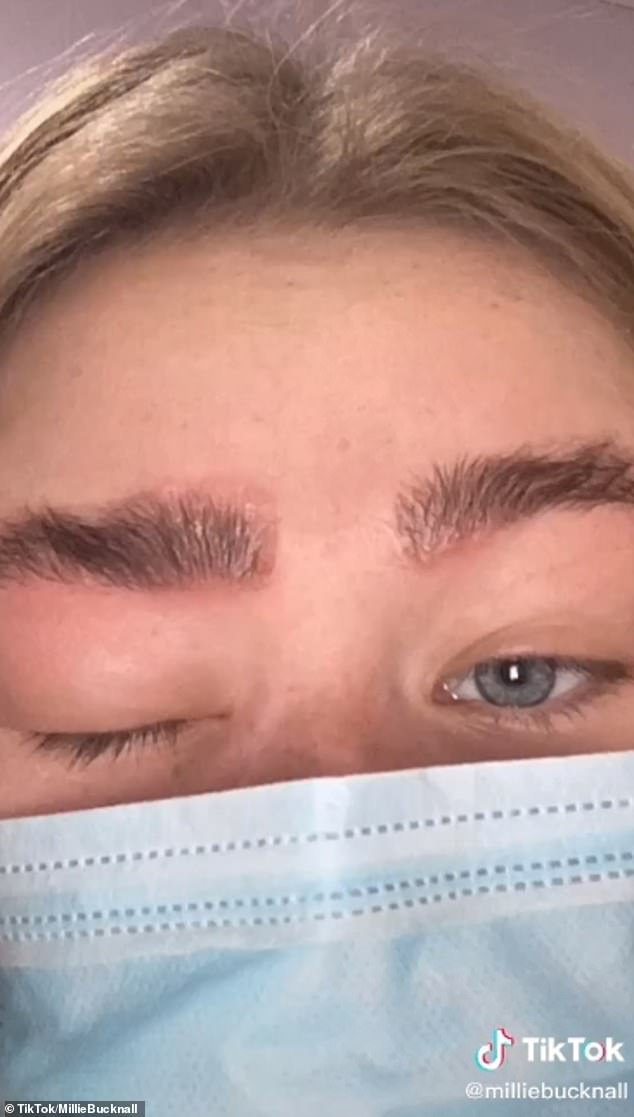 Millie (pictured) revealed an allergic reaction caused her eyes to swell, requiring her to be admitted to hospital

A stream of responses to the video showed concern for Millie and thanked her for raising awareness of the risks associated with popular beauty treatments.

‘Thank you for sharing as a beautician so many people moan about having to come for a patch test but it’s so important,’ wrote one.

Another said: ‘This happened to me, the most horrible experience ever, I had chemical burns on first layer of my eyes and ended up having a seizure, hope you’re okay’

A third added: ‘They looked good to be honest such a shame what’s happened, I hope you’re okay soon’

Sharing advice, a fourth wrote: ‘This happened to me and all my eyebrows fell out, don’t pick the scabs please, you lose more hair’