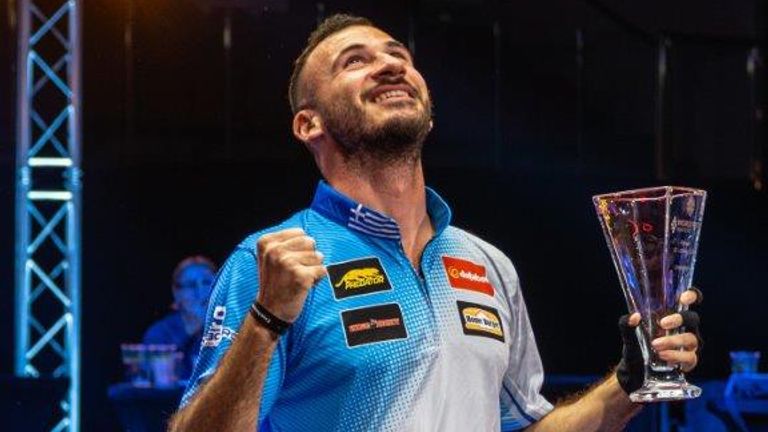 Kazakis banished painful memories of losing the last final in 2019 when he lost position on the 9-ball against David Alcaide and at hill-hill was rooted to his seat as the Spaniard sealed the title.

This time, though, there was no such drama in the final – that had come in a 7-6 semi-final win over Eklent Kaci – as the Greek controlled the table and did to Van Boening what the American himself had done to so many others when he won back-to-back Masters titles in 2014 and ’15.

“I can’t really believe it,” said an emotional Kazakis. “It is amazing. Everything went my way from the start to the end of the final. The big moment was in the semi-finals; I didn’t play well, I was nervous, and I was lucky that Kaci didn’t really play that well. It was the luckiest match I ever won. To go into the final with that momentum, I had nothing to lose.

“When I finished my semi-final I went to the hotel, called my coach, and I told him, ‘I’m doing it again’.

“I believe so much in myself but something inside me, I had these bad lucks and bad rolls in the Mosconi Cup last match in 2018, I have the 9 ball with Alcaide here, then also the semi-final of the World 9-Ball Championship with Joshua [Filler] where I had a chance to go to a final and I screwed up. All these things happened in about five months.

“Sometimes when I was under pressure I was thinking I was maybe going to do it again, and it has been hard. Finally the door opened. When you are always knocking on the door, the most difficult part is to win the first tournament. I think now it will be much easier for me if I have the chance to win a major tournament.

“I feel lucky, I feel blessed, it is the biggest title of my career. A lot of people here told me they were rooting for me, I think because I didn’t win it in 2019.”

The next Matchroom Pool Series event is the World Pool Championship, which runs from June 6-10 at Marshall Arena, Milton Keynes, and you can watch all four days of action live on Sky Sports.