Mark Selby was warned for slow play as Stuart Bingham won five frames in succession to wrest control of their World Snooker Championship semi-final at the Crucible.

Referee Ben Williams intervened to tell Selby to “think about taking a stroke” after the three-time champion took over three minutes deliberating during a 19th frame that ticked over the one-hour mark.

Bingham started the evening with a 131 clearance then made a valiant attempt at a maximum break, before ultimately fashioning a 13-11 advantage heading into their final session on Saturday afternoon.

Resuming 9-7 behind, Bingham made the strong start to the session he required, following his opening century with a promising maximum bid which faltered on 96 when he missed a red to the middle pocket.

Selby’s mood hardly improved when Williams interrupted his deliberations in the next frame to tell him: “This has been going on for over three minutes now, you do need to think about taking a stroke.”

It is not the first time Selby has been criticised for slow play. At the Northern Ireland Open in 2019, he took six minutes to play one shot, longer than it took Ronnie O’Sullivan to make his record-breaking maximum break in 1997. 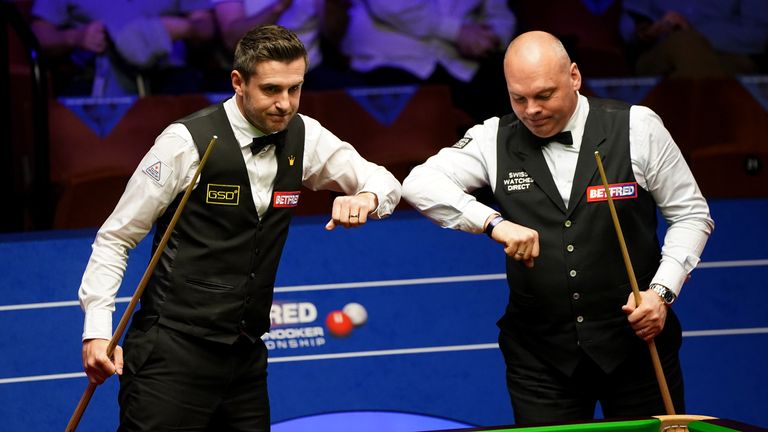 Although Selby fluffed his subsequent safety shot, Bingham could not take advantage and the frame drifted over the hour-mark before a fluked pink and another loose safety on the black by Selby enabled Bingham to make it three in a row.

Bingham, who appeared to be relishing the raucous Crucible atmosphere in sharp contrast to his stony-faced opponent, proceeded to fire breaks of 78 and 69 to extend his lead to three frames.

Selby dug deep to claw back the next two frames – the first of which involved a double re-rack – before a break of 63 ultimately saw Bingham home in the final frame of the night which required a mid-frame toilet break.

Earlier, Shaun Murphy won the last two frames of the day to give himself a glimmer of hope in his quest to reach his first Crucible final in six years.

Murphy had looked set to leave himself an insurmountable challenge heading into Saturday’s concluding sessions after opponent Kyren Wilson turned a 6-2 overnight advantage into a 10-4 lead.

But a gutsy fightback from the 2005 champion, culminating in an 86 clearance in the 16th frame, reduced the arrears to 10-6 and gave last year’s beaten finalist Wilson something to think about.

A coolly-taken 69 break from Wilson in the opening frame of the day suggested it would be business as usual but he relinquished the 10th frame in remarkable fashion by giving away 53 points in fouls after being snookered behind the blue.

Wilson re-established his five-frame advantage but Murphy showed signs of stirring with a superb break of 88 prior to the interval.

Wilson took the next two frames, the second with a 131 total clearance, to go six frames clear but it was the 29-year-old who faltered, spurning strong chances in each of the last two frames of the day.

Having snookered himself on a red on a break on 45, Murphy fired his fine clearance to complete the session, leaving the arena with a fist-pump which suggests he still believes he can salvage their best-of-33-frames encounter.