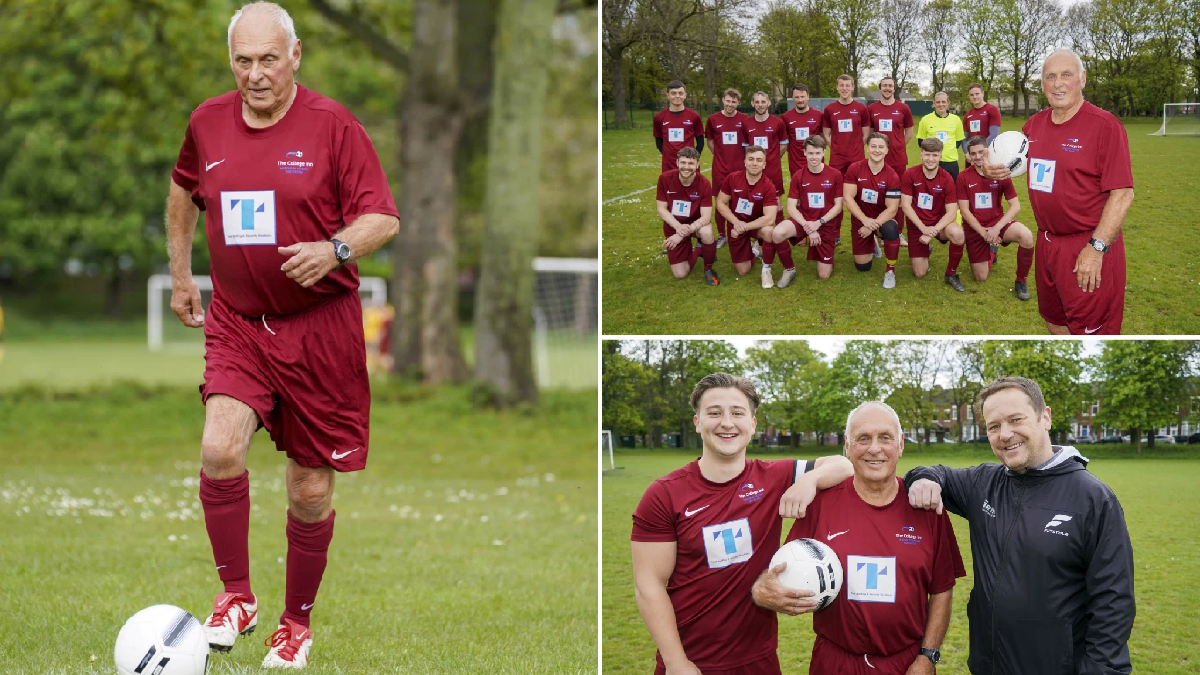 A Yorkshire pensioner is thought to be the oldest Sunday League player, after taking part in a match on his 80th birthday.

John Wootton popped on his football boots on Sunday May 9th to make his Wakefield and District debut for College FC against Kirklands Reserves.

The Liverpool and Barnsley supporter hadn’t played competitive football in over 40 years, but described the experience as the ‘best birthday’ he could have dreamed of.

And it seems John did an excellent job during his seven minute cameo at the end of the match, executing a successful pass and a tackle – and even taking a little tumble.

The dad-of-four, grandad-of-13 and great grandad-of-nine, played alongside his 22-year-old grandson Matty Wootton – who is the team’s skipper.

John, from Wakefield, said: ‘I came on as a sub in the last five minutes, and everyone kept passing me the ball but I kept telling them not to.

‘I had a few touches, a throw in. Someone sent me a through ball and I actually ran after it. It was nice.

‘This is the best gift I’ve ever received, nothing will ever top this.’

When John was 17 he was offered a trial at Wolverhampton Wanderers in a season where the Wolves finished top of the Football League First Division. However, his parents wanted him to continue with his engineering apprenticeship.

He last played competitively around 40 years ago but has kept himself fit with athletics over the years – and was even crowned an over 50s Yorkshire champion for the 800m and 1500m events.

The retired council worker also says that sport gave him a ‘purpose in life’ following the death of his wife, Jean, in 2001.

Speaking on Sunday, John said: ‘Days like today just go to show how incredible sports can be.

‘I’m quite old you see, so I can’t do what I used to, but that’s the beauty of the sport.

‘It was a brilliant day nonetheless and it was so special to have family come and watch.’

Grandson Matty – who captained the team from the midfield – was also impressed with John’s performance.

Matty said: ‘He played well, he is very fit for age if I’m being honest. He did take a bit of a tumble, but he got on the ball.

‘He was a really good player back in the day so he’s got a great football brain.

‘He has always given me advice on how to play the game, I really look up to him.’

After the match, John ended the day with a couple pints with his family at their local pub.