You’ve got male: How Billy Eichner transformed the romcom

Billy Eichner doesn’t know what the big deal is.

Everyone has sex. Gay, straight, whatever, it doesn’t matter. There’s lots of sex in his new gay romcom Bros –twosomes, threesomes, foursomes and Tinder hook-ups too. Just because it’s between two men, in a major studio romcom – the traditional home of white weddings and happy-ever-afters – shouldn’t make it controversial. 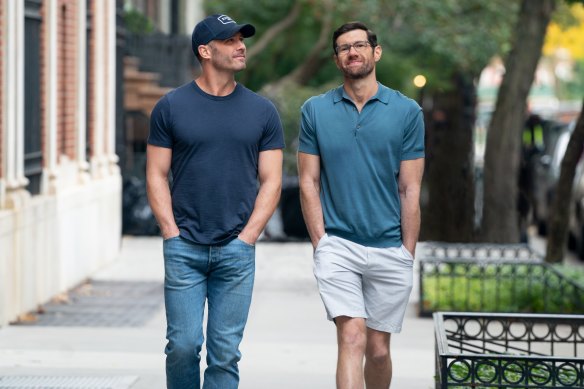 “But also, sex is an opportunity for great physical comedy. Movies have a history of that. Jon Hamm and Kristen Wiig roll around naked and have awkward, hilarious sex in Bridesmaids, so why can’t two guys, you know?

“If Jason Segel can be naked and pouring his heart out in the first scene of Forgetting Sarah Marshall, then why can’t we do that in Bros? If Sacha Baron Cohen can roll around with another man and everyone in the theatre is falling out of their chairs laughing [why can’t we do that]? Ultimately, it’s just great physical comedy.”

Eichner is speaking on the phone as he makes his way to the New York premiere of Bros, the movie that trumpets its firsts proudly – the first gay romcom by a major film studio, first romcom written by an openly gay man and featuring a cast that is largely LGBTQ. 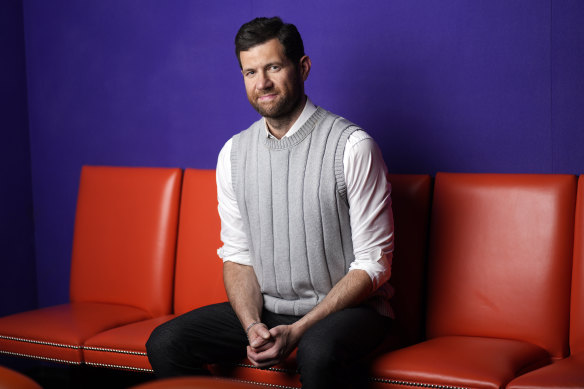 He has been talking about Bros nonstop since the trailer came out earlier in the year. He schilled it at Pride in New York with Mariah Carey in June, he’s been profiled by GQ and Variety and attended the film’s world premiere at the Toronto Film Festival in September. On Sunday, he will be in Australia with co-star Luke Macfarlane and director Nicholas Stoller.

And while we only have 15 minutes on the phone together, it doesn’t matter. The US comedian is not dissimilar to one of those talking dolls where you pull the string in his back and off he goes.

Anyone who has seen Eichner on his Billy on the Street game show, in which he quizzes unsuspecting New Yorkers on celebrities (“Who’s weirder – Tom Cruise or John Travolta?” “Any thoughts on Anne Hathaway?”) while offering them a dollar for their answers, knows he can talk.

He also likes to yell at those unsuspecting New Yorkers (who often give as good as they get) and the celebrities he sometimes drags around with him. It’s a schtick that has carried Eichner through his career, not just on Billy on the Street, but in Parks and Recreation and even in The Lion King remake, in which he voiced the wisecracking meerkat Timon.

In Bros, Eichner plays Bobby Leiber, a high-profile podcaster and museum director, who falls for Aaron, played by hunky Hallmark star Macfarlane, after they spot each other in a gay club. It’s that ol’ romcom staple of a meet-cute – opposites attract and all that – but what follows is a very adult comedy. Considering it’s produced by Judd Apatow and directed by Stoller, who have their fingerprints over everything from The 40-Year-Old Virgin to Knocked Up, that should not come as a surprise.

Not just in terms of the sex (as Eichner says, “who cares!”) but because it’s about adults. Grown-ups with jobs, nice apartments and those who can have full conversations. And this is what Eichner wanted most of all. A grown-up story about love.

“There is something special and exciting and romantic and comforting about seeing your story play out on the big screen,” says Eichner. “But oftentimes, a lot of those stories are about people younger than me, teenagers coming out of the closet or 20-somethings who were just sort of discovering themselves as LGBTQ people.

“It’s amazing we have those stories now, and I wish I had those as a kid, but for me, I don’t see myself because I’m older. I’ve been an openly gay man for over 20 years now. I just turned 44 and I always – and this is not only about gay characters, but even about straight characters in general, especially in comedy – think, ‘Where are the adults?’

“I love When Harry Met Sally, because even though they were actually, I think, 10 years or more younger than I am now, they were allowed to speak and communicate like adults. Same thing for Moonstruck and certainly Annie Hall or Broadcast News, which is one of my favourite movies. 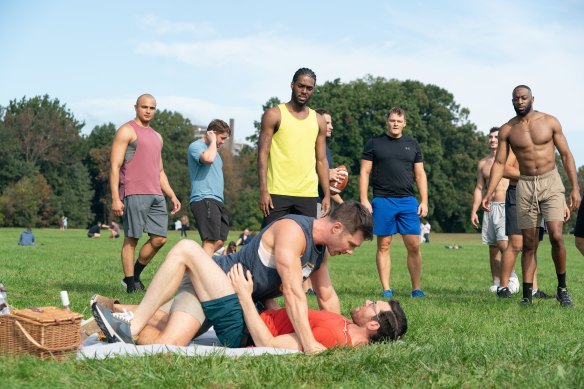 “I love Holly Hunter’s character [in Broadcast News] so much, because she’s incredibly whip smart, a confident, incredibly capable person who was usually the smartest one in the room, and she still fell for the handsome idiot, played by William Hurt, against her better judgement. That’s just a very human thing to do.

Does that make Aaron the “handsome idiot”?

“My character wouldn’t be with an idiot,” says Eichner, laughing. “I don’t think he would have much time [for an idiot], he’d sleep with an idiot or two, and he definitely has, but he would not fall so intensely for someone who was vapid and has a lack of integrity like William Hurt’s character.”

Bros is at its best when it unleashes on the comedy. It plays up Eichner’s neurotic persona – he does a nice line in angry texting – and takes a dig at the “gaywashing” of popular culture. True to form, the relationship between Bobby and Luke follows Shakespeare’s adage that “the course of true love never did run smooth”, but that’s OK. That’s what romcoms are for: happily ever after (a significant amount of hassle).

“They make you feel good about life,” says Eichner. “Romcoms are a mix of reality and fantasy. You see yourself, you relate to the experiences, but it gives it all a hopeful twist.

“We live in a very cynical world. I’m a native New Yorker, a bit of cynicism comes with the territory, but there’s a lot of bad news all the time. A lot of anxiety everyone carries with them, about what’s going on in their own lives, what’s going on in the world around us, social media is driving everyone completely insane. And I think romantic comedies are a cure for all of that.

“They’re sweet and they make you laugh and make you more hopeful and optimistic about life. And we need that. They are just as necessary and valid as some dark and gritty action movie or a movie that scares you.”

Speaking of stuff that scares you, Bros paints a terrifying picture of gay dating life in New York. Less Sex and the City, more Sex All over the City. Is that what it’s really like?

“I’ve been doing it for a very long time,” says Eichner. “I think the dating world obviously changed with iPhones and dating apps and Instagram, you know, everyone meets on their phones. And I don’t love that. I do it because that’s what we’ve all decided, for some reason, that’s the way we meet now.

“But I am old enough to remember a time when I was single in New York before iPhones and dating apps, Tinder and Grindr and all of that. For me, it was much more fun, it’s always more fun and satisfying to meet someone in the real world. When we feel that chemistry, you’re not seeing who they’re pretending to be or trying to be over their phone, you’re actually experiencing them in real life for all that they are.

“I think that leads to a better, stronger relationship. It’s sexier, more exciting.”

Since Eichner does seem like such a romantic at heart, where does he think Aaron and Bobby will be in five years’ time?

“I don’t know,” he says, laughing. “Well, if enough people go see Bros in the movie theatre, maybe we’ll write a sequel and we’ll find out.”

Bros is released in cinemas on October 27.