Home » TV and Movies » Are Animated Dads Getting Hotter? An Investigation

Are Animated Dads Getting Hotter? An Investigation

I thought the whole man-bun thing was played out, and then along came Benja.

First, I sparked to his voice, which is warm, soothing and capable of delivering large amounts of exposition in a single breath. Then there’s his face: high cheekbones, strong eyebrows, no pores. And would you look at the way he dotes on his daughter, Raya? Come on, the guy’s a catch.

With all of those things going for him, Benja quickly leapt to the top of my long list of quarantine crushes. Still, whenever I tried to imagine some sort of future for us, I kept getting distracted by two glaring red flags: One is that evil spirits just turned Benja to stone, and the other is that he’s animated. (At least the first one is reversible.)

Though many would find the whole pixel-person thing to be a deal breaker, I continued to pine for Chief Benja of the Heart tribe (the Heart tribe!) while watching Disney’s latest computer-animated film, “Raya and the Last Dragon.” Then, as the closing credits rolled, I took to Twitter, where I found plenty of other professionals who were proud to let their freak flag fly.

“The protagonist’s dad in ‘Raya and the Last Dragon’ is smoking hot,” tweeted the Hollywood Reporter film critic David Rooney, who also noted, “Gotta love thirst-trap animation.” The writer Hanna Ines Flint concurred: “The man’s arms, I wanna hang off them,” she tweeted.

It’s not just “Raya”: Recent animated films have demonstrated a commitment to putting hot dads onscreen that can only be rivaled by whoever’s casting “Riverdale.” Think of the elf dad from last year’s “Onward,” who looked kind of like a hot, blue John Krasinski, or Riley’s dad from “Inside Out,” whose mustache and five o’clock shadow once inspired a very frisky Buzzfeed article. 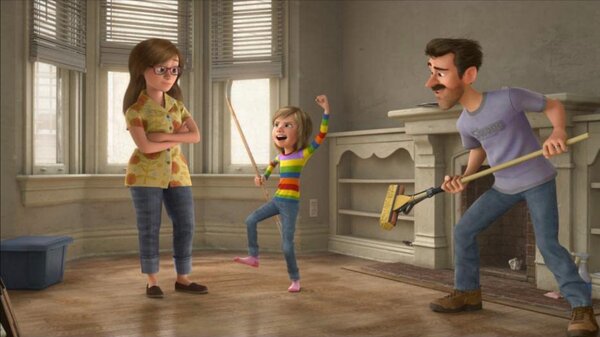 Most hot animated dads, like Miguel’s father in “Coco,” only get a little bit of time to make a big impression, but a precious few get the entire movie to shine, like the lantern-jawed, barrel-chested paterfamilias from “The Incredibles.” Their ranks are ever-growing, but still I wondered: Are animated dads truly getting hotter, or are we just getting crazier?

“Hotness is not just how they’re drawn — it’s all these other things that come together,” replied the writer Bim Adewunmi, a former host of the crush-centric podcast Thirst Aid Kit. She pointed out that Disney had hired the “Lost” actor Daniel Dae Kim to voice Benja: “We interviewed him in person at Sundance in 2020, and I sound like such a pervy teenage girl, but he has a hot aura. He radiates calm, like a good friend.”

If the hot animated dad thing feels like a modern phenomenon, that’s in part because early Disney movies were more content to leave the protagonist’s parents out entirely. Later, Disney might have thrown in a dad or two for plot purposes, but they tended toward elderly and doddering, like Jasmine’s father in “Aladdin.”

“Why do they have these long gray beards?” Adewunmi wondered. “That’s the thing with Disney: The moms are all dead, and the dads are just old. What the hell happened?” Even the occasional attempt to sex up some of those older dads struck Adewunmi as implausible: “King Triton in ‘The Little Mermaid’ has these incredible abs, right? But it’s like, you have seven daughters, my good sir. When does he find the time to be at the gym?”

It wasn’t until recently that Pixar came on the scene and cracked the code wide open. “Pixar doesn’t do an ugly dad,” Adewunmi said. But the Pixar dads aren’t hot in the same way that, say, Regé-Jean Page from “Bridgerton” is hot: Instead, they’re humble-hot, often rumpled and lived-in, like you searched for a nice-looking ex on Facebook and found that he’s got a wife, kids and that certain something-something.

That’s the sort of formula that can turn a tertiary animated character into an internet boyfriend, and as of late, more people are content to confess their cartoon crushes. On the most recent season of “RuPaul’s Drag Race,” lip-sync assassin Denali was chatting with her fellow queens when she revealed that most of the famous people she found hot were animated. “I’m an Aries,” Denali told me, “and I’m very upfront with what I feel.”

That revelation inspired many of Denali’s fans on Twitter to reply with their own cartoon crushes, which they illustrated with surprisingly swoon-worthy clips and GIFs. And though Denali found some of those replies to be not entirely safe for work — “Sometimes it’s a little surprising to have an image of Tarzan going at it on your timeline,” she said — it inspired her to wonder if this collective infatuation with animated figures wasn’t a long time coming.

“Especially when you’re a young gay kid and you’ve yet to watch a lot of mature movies, there are a lot of subtle things you pick up on — like the way Disney would give Li Shang from ‘Mulan’ a really nice chest,” Denali said. “Maybe they’re finally pandering a little bit and leaning into it.”

And then there are recent events, which may have added more fuel to our fire. “Of course, there’s the ineffable factor of quarantine, where everybody briefly lost their minds,” Adewunmi said. “If you have nothing to do but roll from your bed to your laptop, you might say, ‘You know what I’m going to linger on today? The dad from ‘Onward.’”

And if you’re single and still struggling through the pandemic, isn’t it appealing to imagine a generally good-natured, relationship-oriented figure who’d happily be there for you? After “Raya” was over, I half-expected Benja to leap off the screen and onto the couch beside me, where he’d finally be the supportive partner I need to watch dumb episodes of “The Circle” with. Plus, he looks great in patterned aqua-blue tunics, and you can’t say that of every dad.

“See, I don’t think even I could pull that off, so in some ways, he’s far superior to me,” said Daniel Dae Kim. When I called Kim up a few weeks ago, “Raya and the Last Dragon” had just been released and he’d begun to pick up on the internet’s stirrings. “And I’ve also gotten a lot of comments on how that character looks like me,” Kim said. “So I guess by the transitive property, I will take that as a compliment.”

In fact, Kim revealed that Benja got hotter as development wore on: “The character that I saw originally was thinner and leaner and longer,” he said. “I thought that was intriguing, and then when I saw a rough cut, he had grown wider, he had gotten a little bit more muscular, and I noticed a hairline that was kind of similar to mine.”

Still, there must be more to all this than just some well-rendered computer modeling, right? As Kim mused about Benja’s appeal, he wondered whether these animated dads provide a feeling of G-rated comfort in a cultural moment that sorely lacks it.

“In some ways, I think Benja is the dad we all wish we had,” Kim said. “He’s a warrior, but he’s kind and compassionate to his children and looks to unite people as opposed to divide them.”

And if we’re so starved for that sort of handsome levelheadedness that we begin nursing a crush … well, what then? Kim laughed: “I’m reminded of that quote from ‘Who Framed Roger Rabbit,’ where Jessica Rabbit says, ‘I’m not bad, I’m just drawn that way.’”