During tonight’s BAFTA ceremony viewers were instantly left unimpressed by the sound of the canned audience laughter and applause. As hosts Dermot O’Leary and Edith Bowman took to the stage to introduce the first award, viewers were left distracted by the noise of the clapping which seemed to drown out the nominations being read out. Some viewers decided to switch channels completely while others branded the laughter “nauseating”.

For the first award, Edith introduced Priyanka Chopra-Jonas, who appeared on stage to reveal the winner for the best-animated film.

Edith began: “To make the presentation, the multi-talented star of Bollywood and Hollywood, who also campaigns for the environment, women’s rights and runs a foundation for underprivileged children.

“Frankly I think we should give her all the awards it is the incredible Priyanka Chopra-Jonas.”

As Priyanka walked on to the stage to announce the winner, the sound of canned laughter and applause could be heard. 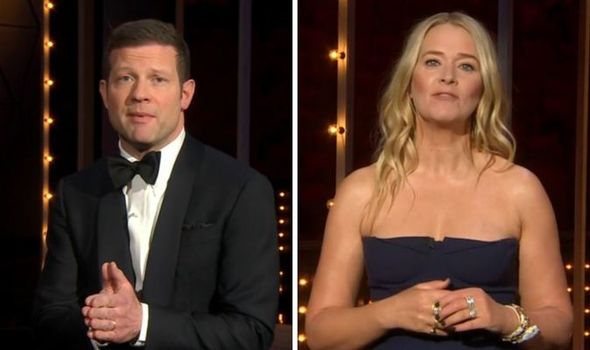 “This canned laughter on the #BAFTA are making this unwatchable,” another tweeted.

A third added: “This canned laughter is ridiculous. I’m going to switch channels.”

A fourth commented: “Not sure how you could have done it any differently, but the dubbed in audience laughter, noise, whatever at the #BAFTAS is very off-putting.”

“The award for the worst *canned* audience goes to…,” a fifth said.