Appearing on BBC Breakfast this morning with Louise Minchin, Secretary of State for Education Gavin Williamson spoke about funding being given to secondary schools to run summer programmes for children who will need extra help to catch up on lost leaning. The BBC presenter tried to get clarification on what school are expected to do with a mere £6,000, but Williamson appeared to avoid most of the questions and ploughed through the interview.

Louise tried to bring the interview back on track numerous as she grew irked by Williamson’s answers.

However, Louise incurred a backlash on Twitter for asking the minister to give guarantees – something almost impossible given the Government’s current policy of working with the everchanging data of the pandemic.

“Louise has picked up a bad Naga habit,” said one fan on Twitter. “It’s pointless asking Ministers or lower politicians if they can guarantee anything.

“Hacks ask questions about guarantees to try and entrap rather than as a caring probe about the welfare of the population. #BBCBreakfast,” they added. 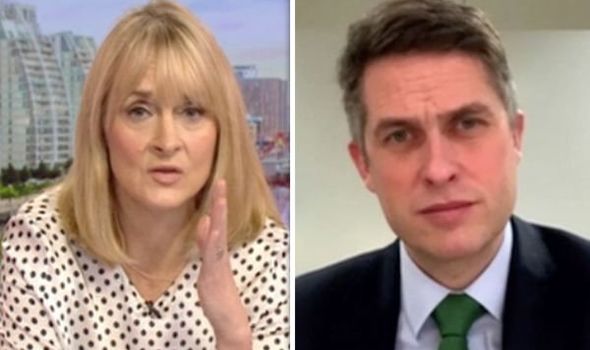 Another viewer encouraged the politician to “answer the question with a simple … I don’t know … then tell her to stop asking stupid questions..#Simple #BBCBreakfast.”

“More truly pathetic questions from Munchkin this morning. How can they possibly guarantee 100% of children will catch up by a certain date?” asked a third person.

A further commented: “Look, I think Gavin Williamson is hopeless, but asking him ‘can you *guarantee* that every child will have caught up on learning by September’ is amongst the most stupid and loaded questions I’ve ever heard. #BBCBreakfast.”

“I cannot believe that Gavin Williamson is still getting away with it! #BBCBreakfast” added another user who grew tired with the politician’s responses.