BBC Breakfast viewers were left baffled when they tuned into the show at six o’clock to see Naga Munchetty and Charlie Stayt wearing poppies only for them to disappear a few minutes later. After viewers demanded an answer over the vanishing poppies, the BBC have explained that they had been worn earlier than official guidelines allowed.

The pair could both be seen with a red poppy, a symbol of Remembrance, pinned to their left lapels but minutes later, the presenters removed them.

The BBC have stated the move was not intended to be disrespectful and was simply to follow company guidelines.

A spokesperson explained: “Every year the BBC agrees dates between which, for those wishing to do so, poppies may be worn on screen.

“This year Remembrance Sunday occurs on November 8th and Armistice Day on Wednesday November 11th. ‘Therefore the BBC has advised that poppies may be worn on-screen, by those who wish to do so, from 6am on Saturday October 31st. 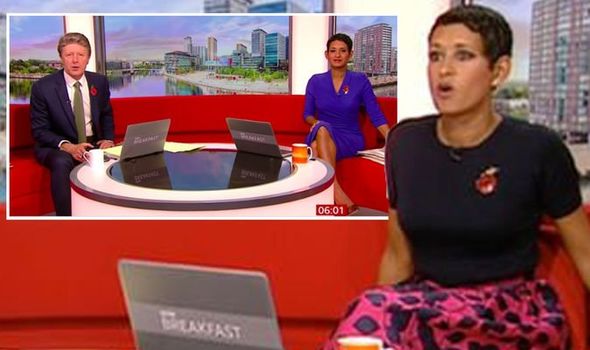 “This enables consistency across all BBC output and is in line with a number of other major public bodies and public figures.

“Naga and Charlie were wearing theirs earlier than the guidance outlined, which is why they were removed, and there was no intention to appear disrespectful.

“The following morning, Saturday 31st October, Naga and Charlie were wearing poppies in line with the guidance.”

BBC viewers had flocked to Twitter on Friday to question why the poppies had been removed, 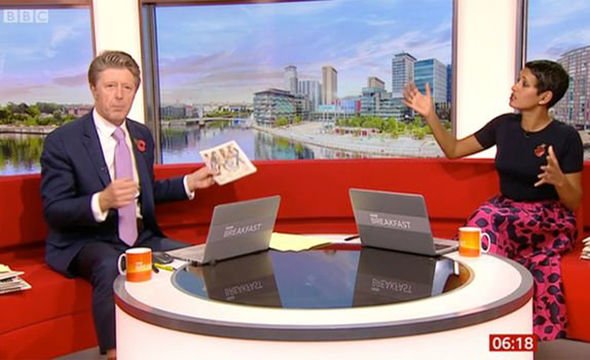 “Why did Charlie & Naja remove their poppies this morning on BBC Breakfast? #BBCBreakfast,” one viewer shared.

A second asked: “#BBCBreakfast why have Charlie and Naga removed their poppies?”

Another tweeted: “Why were #Naga and #Charlie wearing poppies at 6am on @bbcbreakfast but by 6.07 they had been removed?

“Wearing a poppy should be a choice not an expectation and it’s fine not to wear them. But why take them off part way through the show? #poppies #BBCBreakfast #PoppyAppeal.”

The BBC’s explanation came after Defund the BBC campaign demanded they give a “plausible explanation” for the removal of the poppies.

The group said: “We’re still waiting for a plausible explanation for the BBC’s decision to remove poppies.

“The fact it has international viewers is not satisfactory when the corporation is funded by taxing the British people under the guise of public service broadcasting.

“We are not claiming that other BBC presenters aren’t wearing them.

“We’re asking for a plausible explanation for why these two presenters removed them, beyond ‘we have international viewers.’”

BBC Breakfast airs daily on BBC One at 6am.