Life and love created a number of challenges for the dedicated midwives at Nonnatus House on Sunday’s installment of Call the Midwife.

No challenge was greater than Nurse Lucille’s heartbreaking miscarriage on the beloved PBS series. She and her husband Cyril were so happy and excited about their unborn baby’s arrival that they worked themselves into a lather to make sure the child would be provided for and adored.

Ever determined to join the professional class, Cyril kept sending out his resume and Lucille continued to work, but confessed to Nurse Phyllis and Cyril that she would have to eventually transition into a health consultation job that could provide more suitable hours for a working mother.

Phyllis immediately understood Lucille’s concern, but Cyril felt threatened by Lucille’s choice. He worried that she didn’t think he was a good enough provider. Lucille told Cyril her decision to eventually give up midwifery had less to do with him and more to do with her desire to keep working. The two argued and Cyril stormed off.

Cyril went down to the docks to clear his mind and a prejudiced white cop made him move. The next morning, when Cyril returned home, Fred gave him the letter he’d been praying for: a job offer in civil engineering. A relieved Cyril then bought Lucille a bouquet of roses and headed straight home to apologize.

Lucille apologized, too, and everything seemed to be going swimmingly until Lucille delivered her patient Amy’s baby and realized she herself was bleeding. The midwife completed the delivery (Amy gave birth to a beautiful baby girl) and called Nurse Phyllis, who arrived immediately and convinced Lucille to lie down. 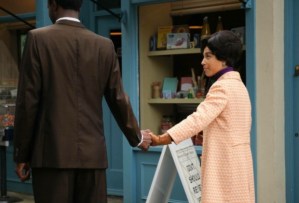 While Nurse Phyllis wrapped up the final steps in Amy’s delivery, Lucille realized her dreams of motherhood would have to wait as she learned the tragic truth in the bathroom. She and Phyllis both cried and the elder midwife called for an ambulance because Lucille was bleeding excessively.

Cyril came to visit Lucille as she recovered at St. Cuthbert’s Hospital and wisely told her it wasn’t about the wailing — because, he too, was grieving — but the waiting for something good to happen that would carry them through their sadness. An encouraged Lucille smiled at Cyril and it was clear they would find a way to overcome their loss.

Nurse Trixie, meanwhile, dealt with a few tragedies of her own. For starters, she was disappointed that she hadn’t realized Glenda Packer was physically abusing her husband Gordan Packer, a paraplegic who’d left the hospital prematurely, as well as their children. Trixie had seen the bruises on Gordan’s back but mistook them for bedsores.

But after Deborah, the Packers’ eldest child, told her teacher and eventually Trixie what was going on at home, the midwife learned the awful truth and immediately contacted the NSPCC and a female officer intervened. Trixie and the officer later saw Glenda threaten her son David with the very dog leash Deborah said the wife and mother often used to beat them with, and Gordan confirmed that the accusations were true. Worst still, Gordan said, they didn’t even have a dog.

Glenda was arrested and Gordon won custody of their children. Just as Trixie began to recover from her work woes, she received awful news that her godmother in Italy was dying and she rushed to be by her side. Trixie also told Matthew to wait for her and “keep their life warm,” and Matthew said he was just a train ride away if ever Trixie needed him in Italy. 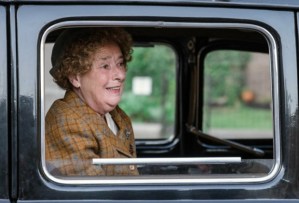 Meanwhile, Phyllis, who had inherited her mother’s £5000 pounds in premium bonds, set out on her own adventure and finally used most of the vacation time she’d accrued.

Phyllis embarked on a six-week cruise and tried to convince her bestie, Miss Higgins, to join her but alas, the secretary’s seasickness wouldn’t allow it. So, off Phyllis went to enjoy a life unexamined, but not before vowing a triumphant return soon after.

What did you think of the latest Call the Midwife? Do you think Trixie and Phyllis will come back? Drop your thoughts in the comments.