Home » TV and Movies » Can We Please Get Steve Kornacki on the Oscars Show?

Can We Please Get Steve Kornacki on the Oscars Show?

In a year as crazy as this one, why not switch to an Oscar-style electoral college and bring in MSNBC’s unflappable stats geek to keep viewers in the know? 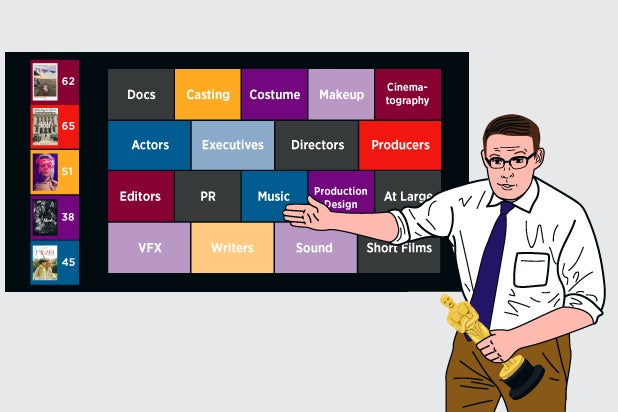 A version of this story first appeared in the Oscar Nominations Preview issue of TheWrap’s awards magazine.

Every year, I try to explain how the Oscars’ system of vote-counting works, delving into the intricacies of ranked-choice voting (the Academy calls it the preferential system) and attempting to point out why it’s a pretty good way to determine a winner. But this year, I’m going to scrap that approach. Instead, since this will probably be a low-rated Oscar show (and what do they have to lose?), I’m going to suggest that for one year, the Oscars scrap ranked-choice voting in favor of … the Oscars Electoral College!

And then I’ll go further and say that PricewaterhouseCoopers should report the results in real time during the Oscar show, and that the Academy should hire MSNBC’s Steve Kornacki to give us constant updates on the AMPAS version of The Big Board at the side of the Dolby Theatre or Union Station stage. (Or from a studio somewhere.) Kornacki will of course be exempt from the Oscars’ black-tie dress code; he must wear khakis and a white shirt with rolled-up sleeves, and how could this fail to get better ratings than a parade of sealed envelopes?

The U.S. Electoral College would have to be adjusted a bit, of course. The Academy’s 17 branches, plus its members-at-large, would replace the 50 states, so there wouldn’t be as many electoral votes. Each branch would get two electoral votes to begin with, just as every state does, and then the rest would be allocated by the size of the branch.

The biggest branch, the actors, would end up with 25 electoral votes, making them the California of this race. The smallest branch, casting directors, would only have four, and they would complain because without them the actors wouldn’t have jobs. (By the way, I’ve worked out the percentages and my figures are an actual proportional equivalent to the U.S. Electoral College.)

Every few minutes during the show, Kornacki would show up to explain that if “Nomadland” could put together wins in the branches for cinematographers (seven electoral votes), producers (12), production designers (nine) and marketing and public relations (12), it might be able to block “The Trial of the Chicago 7,” even if that film wins among actors (25) and writers (11) — and that short films and feature animation could be the key swing branch with 16 electors.

Maybe the executives branch comes in early with its 13 votes for “Mank,” the costume designers branch with five for “Promising Young Woman” and the sound branch with 11 for “Sound of Metal,” but returns from the directors and documentary branches are counted (and recounted!) more slowly, leaving the race hanging in the balance into the show’s fourth hour. Kornacki, though, would remain composed as he ran through all the possible scenarios for viewers who would be cutting down on the bathroom breaks or snack runs lest they miss the moment when the race is called.

Would it be fairer than using ranked-choice? No, it wouldn’t.

Would it be more entertaining? Damn right it would.

Would it cause people to panic, worrying that the races in the music branch and the members-at-large might not be called for four days? Maybe.

And would it lead to the losing film suing the Academy and claiming that PwC rigged the count? Probably not — this may be Hollywood, but even in the dream factory we don’t believe those kind of fantasies.

Addendum: As noted above, this story first appeared in TheWrap’s print magazine in early March. When I wrote it, I was well aware that the electoral college system is an awkward fit for competitions in which there are a large number of candidates — it’s much better suited to a presidential contest with two main contenders. But the idea was to have fun with this and not sweat the details.

And now that the nominations are out and details are emerging about the show, I want to add this: The scenario I lay out here won’t really work, but Steve Kornacki on the Oscars will. We don’t even need Best Picture results revealed in real time through the ceremony — we can cut to him after Best Film Editing is handed out, for instance, and he can explain that the category’s winner only goes on to win Best Picture about half the time, but that only two films in 40 years have won Best Picture without an editing nomination.

It doesn’t sound entertaining when I write it, but I know it will be when he says it.