It’s about time. For the first time in its nearly hundred-year history, the Oscars have nominated a pair of female filmmakers in its Best Director category, with both Chloé Zhao and Emerald Fennell earning nominations for their films “Nomadland” and “Promising Young Woman,” respectively. Both filmmakers also received screenplay nominations for their films, and each feature landed on the list of eight nominees for Best Picture.

In the Academy Awards’ 93-year history, only five women have ever been nominated for Best Director: Lina Wertmüller (1976′s “Seven Beauties”), Jane Campion (1993′s “The Piano”), Sofia Coppola (2003′s “Lost in Translation”), Kathryn Bigelow (2009′s “The Hurt Locker”), and Greta Gerwig (2017′s “Lady Bird”). This year marks the first time the Academy handed out nominations to not just one woman in the category, but two. Zhao also becomes the first woman of Asian descent to pick up the nom.

Zhao has long been considered the front-runner for this year’s Best Director statuette, and her “Nomadland” has remained on top of the Best Picture charts since it debuted at Venice and TIFF in September, picking up both the Golden Lion and the People’s Choice Award along the way. The accolades have not stopped in the interim: It was named one of the ten best films of 2020 by the National Board of Review and the American Film Institute, and received four nominations at the 78th Golden Globe Awards, winning both Best Motion Picture – Drama and Best Director (making Zhao just the the second woman and the first Asian woman to pick up the latter). And that’s not even including the scads of critics groups and other festivals that have feted the film during this protracted awards season. 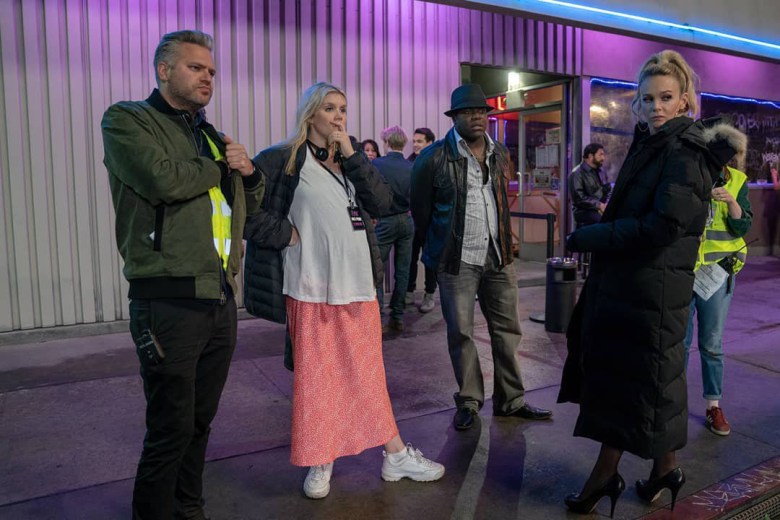 But while Zhao and her film have long been this season’s heaviest-hitting contenders, the “Rider” and “Eternals” filmmaker has not been alone when it comes to in-the-mix female filmmakers. “Promising Young Woman” filmmaker Fennell has also stayed in the conversation since the film debuted at Sundance in 2020, with her raucous debut (starring newly minted Best Actress nominee Carey Mulligan) continuing to win fans and accolades, including a number of nominations at the Golden Globes and the BAFTAs, in addition to nods and awards from other critics groups and voting bodies.

Other contenders during this particularly weird campaigning season included “One Night in Miami” filmmaker Regina King (the film was nominated for three awards this morning) and indie darlings like Eliza Hittman (“Never Rarely Sometimes Always”) and Kelly Reichardt (“First Cow”), whose films were shut out at this year’s Oscars, despite earning a number of awards and nominations over the past few months.

Zhao and Fennell now join a small, but distinguished assortment of female nominees. Bigelow is the only woman to have actually won the award, and her “Hurt Locker” also won Best Picture and Best Original Screenplay. After Bigelow’s big win, no female directors were even nominated in the category until 2018, when Gerta Gerwig was nominated for her feature directorial debut “Lady Bird.” She ultimately lost out to Guillermo del Toro for his Best Picture winner “The Shape of Water,” and another woman hasn’t been nominated in the category since. (Last year, Gerwig was overlooked for the Best Director category, though her “Little Women” picked up six nominations, including Best Picture.)

Elsewhere, female directors were nominated both in sparing numbers (like in the Best International Film category, where only a pair of female-directed features were nominated, including Kaouther Ben Hania’s “The Man Who Sold His Skin” and Jasmila Zbanic “Quo vadis, Aida?”) and in more thrilling portions, as in the Best Documentary Film category, which included four of five films directed or co-directed by women (Garrett Bradley’s “Time,” Maite Alberdi’s “The Mole Agent,” Nicole Newnham’s “Crip Camp,” and Pippa Ehrlich’s “My Octopus Teacher”). 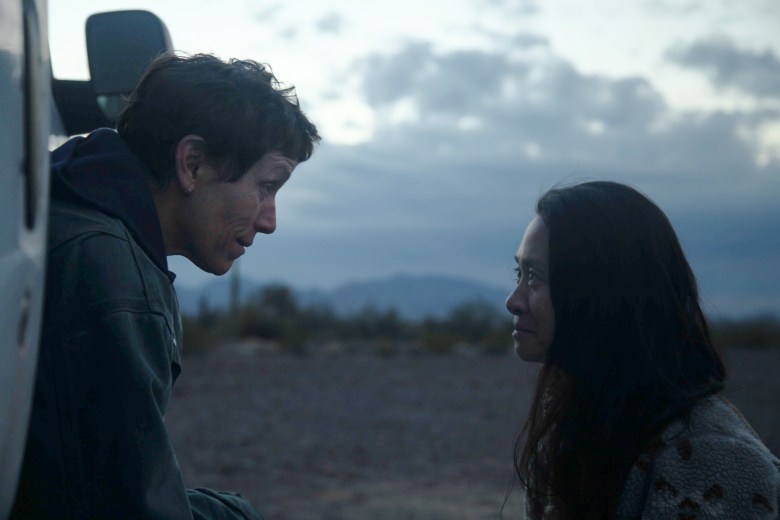 Frances McDormand and Chloé Zhao on the set of “Nomadland”

On the writing side, just five women were nominated in both the Original and Adapted Screenplay categories: Zhao was joined in the Adapted field by a trio of “Borat Subsequent Moviefilm” screenwriters (Jena Friedman, Erica Rivinoja, Nina Pedrad, part of a sprawling listing of writers on the popular sequel), while Fennell was the only woman to crack the Original Screenplay field for her debut film, “Promising Young Woman.”

Winners for the 93rd Academy Awards will be announced Sunday, April 25. While the exact format of this year’s show has not been fully announced yet, we do know that the event will be held at both the Dolby Theatre and Los Angeles’ historic Union Station. Check out the full list of this morning’s nominations right here.