For more than a half-century, Frederick Wiseman has been telling the story of the United States, one documentary and fluorescent-lit room at a time. Since directing his first film, “Titicut Follies” (1967), about a Massachusetts prison for the criminally insane, he has trained his precise, unflinching eye on different dimensions of the country, with a focus on social institutions. Again and again, he has returned to the spaces in which human beings organize their lives, charting the great, bright ebb and flow of people and power in offices, schools, cities — all worlds within worlds.

Wiseman likes to give his movies deceptively simple titles: “Welfare,” “Central Park,” “Public Housing.” The names announce and delineate his subjects, and suggest a universality that the movies both embrace and resist. The nominal focus of his latest, the magisterial “City Hall,” is the administration building for the city of Boston, a nine-story Brutalist citadel where the mayor works and the citizenry comes to petition the state, a.k.a. talk their way out of parking fines (with surprising success). Like other Wiseman movies, the documentary is fundamentally a portrait of a people.

“City Hall” is also an exploration of civil society and the common good. It’s instructive that it opens on a sunny cityscape of autumnal trees, glass-and-steel towers and clouds drifting across a blue sky. There are few people around, but more soon arrive, trickling and streaming into City Hall and its many tributaries. Wiseman returns to the building repeatedly, but he isn’t interested in it the way an architecture critic might be, in its design and engineering. He’s interested in its social structure and function, how things work inside and out (how they don’t), and how this often-derided chunk of concrete comes to vivid life in a multitude of human interactions. 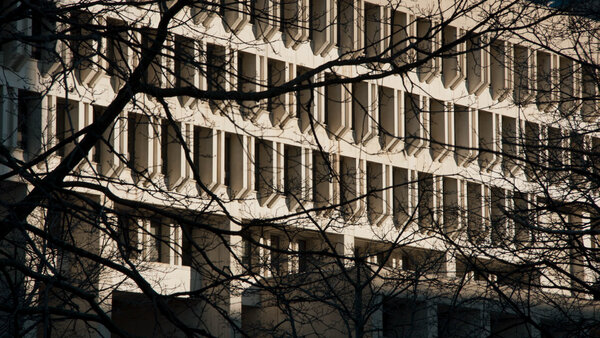 With his customary sweep and detail, and without narration or the usual documentary prompts, Wiseman explores these exchanges throughout the building, witnessing a wedding in Room 213 and scanning the transaction windows elsewhere. He gets outside, too, following workers who collect the city’s trash and install its bus-and-bike lanes. He passes Fenway Park (“Best Team Evah”) and moves through a diversity of neighborhoods, but he also lingers on the poignant sight of boarded-up businesses. Time slips by as the trees lose their leaves and snow falls; time also adds up: “City Hall” runs four and a half mostly engrossing hours, making it one of Wiseman’s longest.

That sounds daunting, but I could have watched hours more of people simply talking to one another in auditoriums and across conference-room tables. The quintessential Wiseman scene is the meeting, and here he dips quickly into some while lingering in others. Other encounters are more intimate, like the scene of an inspector poking around a tidy home of a septuagenarian with dog tags hanging from his neck. Rats have invaded the apartment and the landlord is clearly derelict. As the inspector opens cabinets and peers under baseboards, the tenant speaks about his life, a recitation that builds into a miniature epic of loneliness, struggle and his self-described broken spirit.

The most recurrent figure is the city’s mayor, Martin J. Walsh. His screen time at first suggests that Wiseman is creating one of those top-down documentaries that devotes much of its attention to power brokers. But most of Walsh’s appearances read as ceremonial, the kind of meet-and-greets that fill a mayor’s calendar. In one scene, he speaks to a room of attentive seniors; in another he helps serve Thanksgiving dinner at a charitable event. A big, affable presence, Walsh salts his boosterish duties with earnest-sounding personal anecdotes: He takes care of his mother, is in recovery and has a Dorchester accent that Hollywood actors pay good money to try and learn.

In time it becomes clear that Walsh isn’t the subject of “City Hall” but rather the most visible face of the city’s government, its good will ambassador. He also serves as a sharp counterpoint to President Trump, an unseen presence whose administration, policies and political agenda wind through the movie like a cord. Walsh invokes Trump several times, including in speeches extolling immigrants. Elsewhere, an unidentified man in a meeting raises the administration’s legacy vis a vis the 1968 fair housing act. The Trump administration’s plans to weaken the act, the man soberly explains to his worried-looking colleagues, is nothing less than an “attack on civil rights.”

In 1986, Ronald Reagan delivered one of the most defining lines of his presidency: “The nine most terrifying words in the English language are: I’m from the government, and I’m here to help.” The quip sounded like a rejection of government aid when, in truth, it was embedded in a speech that announced aid to farmers. Still, it became an anti-government laugh line, one that encapsulates an ideological and political shift away from the social good to the market. For his part, Wiseman has answered that laugh line and its cruelty with a titanic body of work that — meeting by meeting, institution by institution — serves as a powerful refutation. His is the art of resistance at its finest.