Claire Saves Jamie’s Life by Giving Him a [NSFW] in Outlander Season 5, Episode 9

So, this entire episode of Outlander basically revolved around an evil snake (Lord Voldemort, is that you?) biting Jamie’s thigh, and it was all extremely dramatic and angsty so let’s get right to it. But real quick: if you’re feeling somewhat distressed due to the lack of sexual intimacy on Outlander lately, don’t worry. That changed this week in the weirdest possible way. Like, even weirder that Claire and Jamie doing it in a horse stable next to a bunch of manure.

Because Jamie and Roger are all about bonding these days, they decide to go out hunting together to gather some food for Fraser’s Ridge. Fun! But tragically, they manage to kill approximately zero animals, and then Jamie gets attacked by a snake. In other words:

Sure, Roger heroically sucks the venom out of his father-in-law’s wound, but by the time he and Jamie manage to make it home—they even get stranded in the forest for a bit—things are not looking good. Even an army of maggots aren’t enough to save Jamie’s leg, and it looks like Claire’s going to have to amputate it—which her husband’s not thrilled about. In fact, Jamie somewhat petulantly decides he’d rather die than live without his leg, something no one is impressed by.

Claire Saves Jamie’s Life by Giving Him … a Hand Job?

This scene was a little confusing, and honestly I was clutching my chest so hard during it that I may have hallucinated. But this is what appears to have happened: Jamie, near death, demands to return to his bed so Claire can sleep next to him. (Sure. Fine. Makes sense.) But in the middle of the night, Jamie’s condition worsens, and he asks Claire to touch him, and then he seemingly dies (or at least becomes unconscious) right in the middle of their conversation. So…what does Claire do? Perform CPR, you ask? Nope. Call for help? Also nope. She strips off her nightdress, lies naked on top of Jamie, and then reaches down and gives him a hand job, which causes him to miraculously revive.

Again: Claire appears to have saved Jamie’s life by touching his penis. I don’t know what else to say due to being speechless.

If you’re wondering whether Jamie’s leg gets amputated, the answer is, thankfully, no. And it’s all because Brianna ingeniously invented a syringe using a hollowed-out snake tooth. Guess she’s right there with her mom when it comes to changing the history of modern medicine! 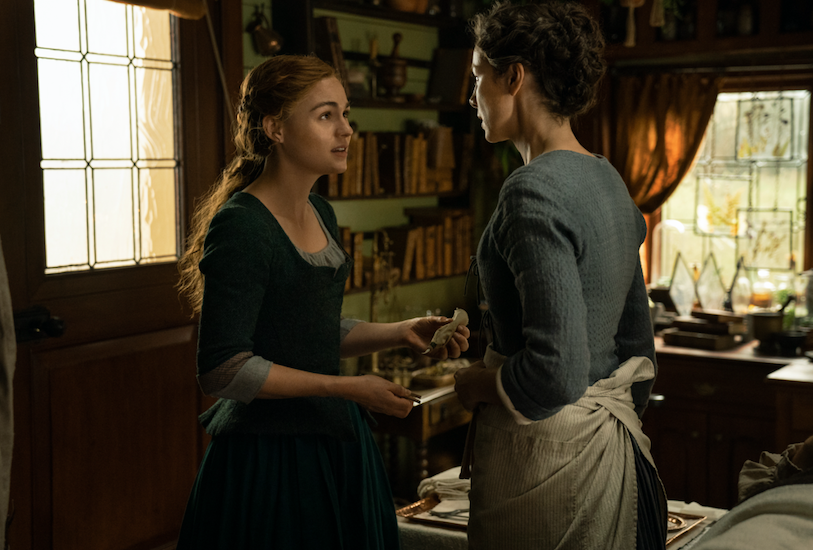 Oh, and speaking of Brianna, a rogue buffalo showed up on Frasier’s Ridge and almost killed her, but it’s cool—Claire shot it and now everyone has dinner for the next month. Moving on!

Let’s rewind for a quick second: Remember when Jamie and Roger were in the woods together? Jamie told Roger his dying wish is for him to kill Stephen Bonnet. The thing is, Roger isn’t the type of guy who goes around murdering people—even truly evil people—but Jamie goes ahead and informs him that Bonnet’s planning to claim Jemmy as his son.

The Good News? Marsali Had Her Baby.

She was born in the middle of the woods and her name is Felicity, much like my favorite American Girl Doll. 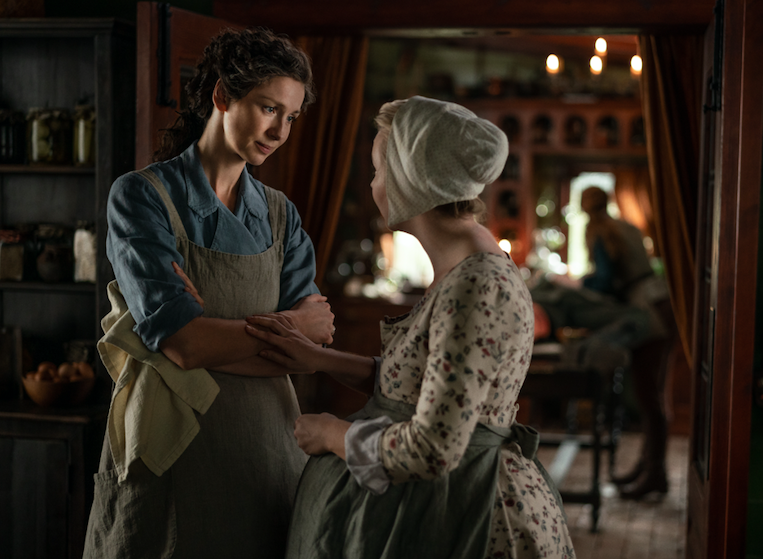