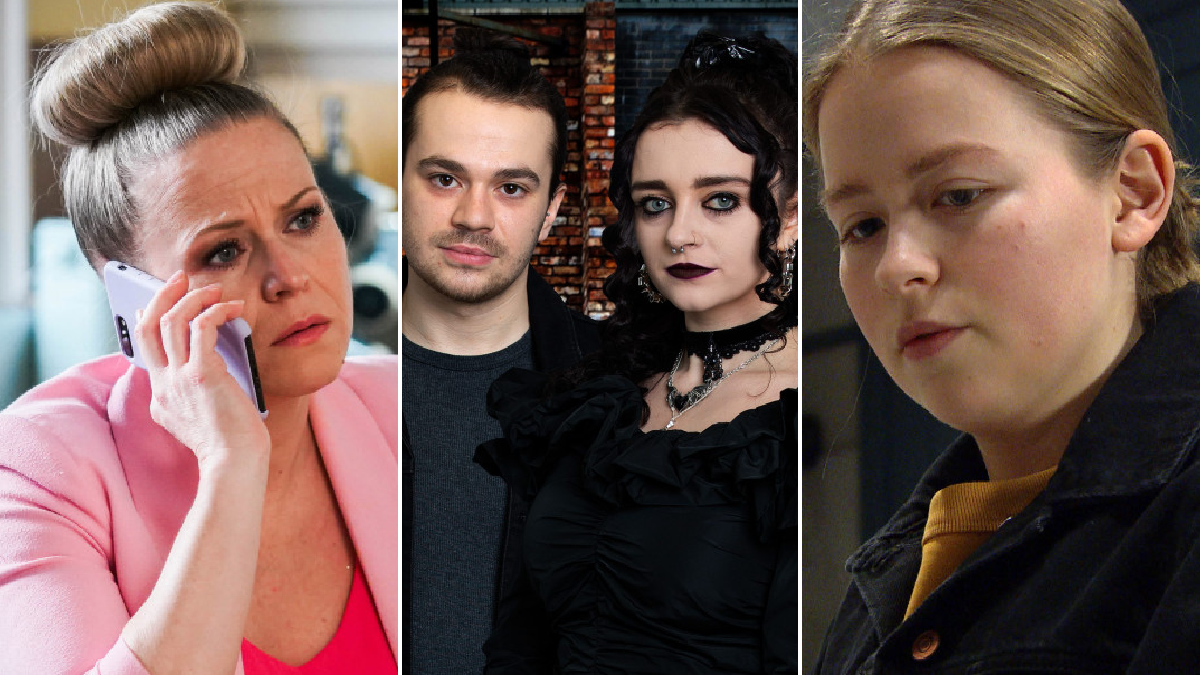 The assault will be carried out by Corey Brent (Maximus Evans) and a group of thugs.

EastEnders stalwart Linda Carter (Kellie Bright), meanwhile, thinks she might be pregnant, as she continues to meddle in Nancy’s (Maddy Hill) affairs.

Meddling is interestingly something of a running theme in soapland this week, as Moira Dingle (Natalie J Robb) sticks her nose into Mackenzie Boyd’s (Lawrence Robb) business in Emmerdale!

And Summer Ranger (Rhiannon Clements) is on a meddling mission of her own in Hollyoaks, as she sets out to sabotage Sienna Blake’s (Anna Passey) date.

It’s a week that will no doubt change everything for several of soap’s finest, so if you’d like to know a bit more about what to expect, then keep reading.

Seb and Nina are assaulted in Coronation Street

Corey heads out to meet his mate Eli in a stolen car. Not wanting to let her beau down, Asha jumps in the vehicle – as do Summer and Kelly! They stop at a wasteland, have some beers and turn up the music. Seb and Nina, who are enjoying a romantic stroll, cross paths with the gang, and animosity soon ensues. Corey insults Nina, while Kelly slaps her! Seb and Nina head off, but Corey and his mates give chase, and the two lovers are subjected to an unprovoked and brutal attack.

Callum’s doubts about Ben grow, and unable to contain himself, he asks his beau if he had any part of play in Kush’s demise. Ben denies any involvement in Kush’s death, which leaves the young copper somewhat at ease. Ben, however, throws a curveball when he asks that he and his fiancé are honest from here on our, and therefore Callum admits to trying to have Phil put away when working undercover! Ben is furious, and demands answers. Callum, meanwhile, tells his lover that he’ll be waiting at the registry office for him no matter what. Will the soap wedding of the year go ahead?

Moira sets a plan in motion with Cain’s assistance, as she wants to catch Mack while he’s out doing one of his dodgy deals. Mack, meanwhile, assures Charity that he’s been discreet about the job, but Charity knows he’s invited Aaron along! The deal gets underway, but the buyer is furious when he finds a tracker amid the goods in the back of the van! The buyer flees the scene, leaving Mack and Aaron in shock.

Sienna is looking forward to her blind date with a man named Theo, but when Summer gets wind of her adversary hopes of romance, she’s determined to put a stop to it. Summer re-arranges the date and meets with Theo herself – all the while pretending to be Sienna!

Abi asks Kevin to cancel their wedding in the wake of the attack, and tells Seb just how much she loves him, as he’s wheeled away for a scan. Nina, meanwhile, regains consciousness and tells Abi and Roy that all she can remember is coming face-to-face with Corey and his mates.

Linda struggles to come to terms with Nancy’s decision, and soon enough the mother and daughter duo are at each other’s throats once again. Mick warns his wife against interfering in Nancy’s life, and Linda agrees to drop it, but she soon resorts to meddling some more, as masquerades as Nancy while making a phone call. The landlady speaks to Nancy’s doctor, but starts to feel faint. When the doctor suggests a check up, Linda is forced to admit that she thinks she’s pregnant!

Lydia is arrested in Emmerdale

Lydia considers applying for the pupil liaison job at a school nearby after her counselling session with Vinny was successful. After the interview, she’s overjoyed – having believed that it went rather well. However, she loses her smile when the police arrive in the age and arrest her on suspicion of running a scam pension scheme!

Marco schemes against Trish with sibling Jacob in Hollyoaks

Marco applies to be Trish’s new assistant. Trish isn’t so sure if she should employ him, but Fergus reckons she should. Marco later meets with his brother Jacob in the park and it becomes clear that the two have something of a plan up their sleeve for Trish.

Nick and Leanne are convinced that they’re safe, but they’ve got no idea that Simon gave Peter their address! Peter, meanwhile, is discharged from hospital, and he and Carla set off to the hideout – but they’re being followed. What happens next remains to be seen, but Sharon soon pops by No.1 with flowers for Peter, and while Carla is distracted, Sharon nicks her phone and finds the address of the hideout. She sends Harvey’s heavy around!

Karen does a TV appeal to find Bailey in EastEnders

Mitch blames himself for Bailey running away, while Karen blames her old boss. Jack suggests that that do a TV appeal, and they do just that. Karen, however, lets her fears get the better of her, and when nasty comments are left on the fundraising page, her mood worsens. She heads into the Square livid.