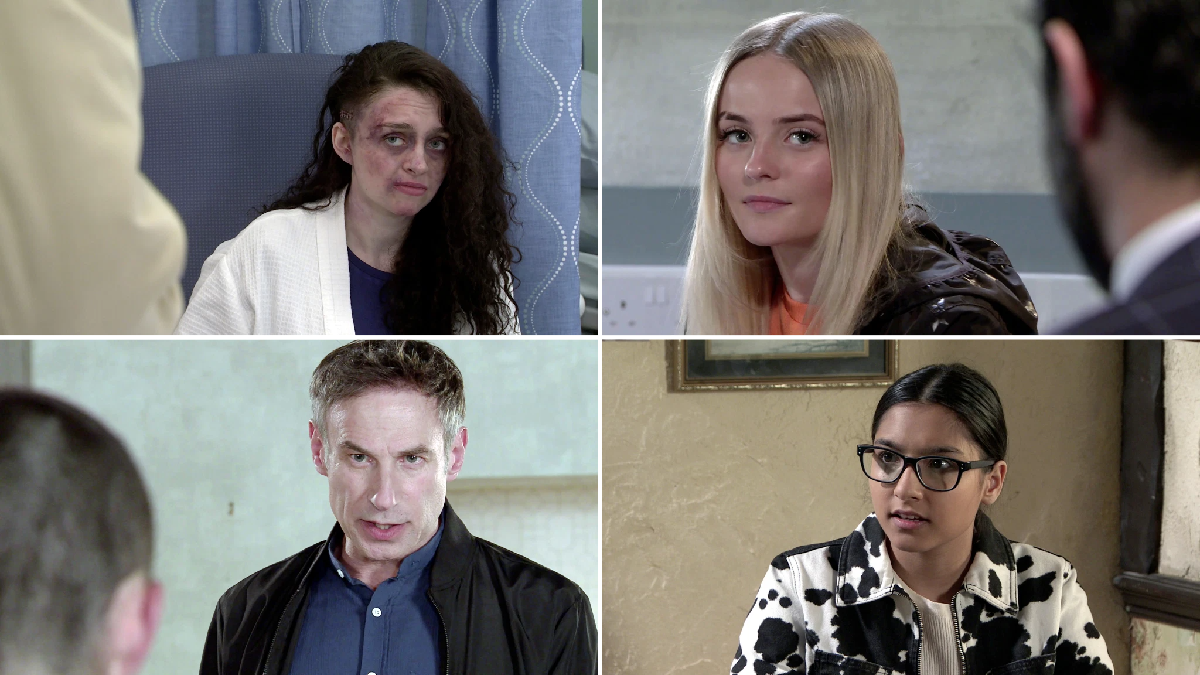 Coronation Street next week focuses on the harrowing aftermath of the attack on Nina Lucas (Mollie Gallagher) and Seb Franklin (Harry Visinoni) – and Abi (Sally Carman) wants answers while Roy (David Neilson) is struggling to cope.

Monday May 10 Part One

Corey instructs Asha to tell the police they were together in the flat when the attack took place and ensure Amy doesn’t blab. Asha meets up with Amy, but they’re interrupted by the arrival of Dev.

Dev begs Asha to come home, worried that she’s living with Corey, a prime suspect in the attack. Amy tells Asha to stop covering for Corey, but what will she do?

A frustrated Abi tells Kevin that she’s going to have to find Seb’s attacker herself. Abi quizzes Nina about the attack on Seb, but Nina gets upset and admits it’s all a blur.

When Kevin reveals that Nina remembers seeing Corey and Kelly shortly before the attack and he’d be wise to keep Asha away from Corey, Dev’s aghast.

Awash with panic, Kelly calls to see Corey and asserts that they’re in big trouble. Summer unburdens herself to Todd and explains that she was there the night Seb and Nina were attacked but left before anything happened.

The police call at the builder’s yard flat and arrest Kelly. Toyah’s stunned. Asha watches in horror as Kelly is driven away in a police car.

Billy is horrified to hear how Summer went joyriding in a stolen car with Corey and his mates. He insists she must tell the police all she knows.

Asha is upset that everyone believes Corey was responsible for the attack.

Meanwhile, Toyah watches fearfully as the police gather up Kelly’s belongings for examination. The police interview Kelly but clearly terrified, she refuses to answer their questions.

Kelly returns home with Imran. Toyah’s relieved to see her, but Imran warns her that Kelly’s not out of the woods by any stretch.

Wednesday May 12 Part One

Kelly pays Corey a visit and suggests they tell the police the truth, but he sends her packing. Corey’s dad Stefan tells him to cut all ties with Kelly.

Abi goes to the police station to get them to listen to Seb’s voice message that he left her just before he was attacked. This comes just as Corey walks in with his dad to make a statement.

Toyah and Imran’s attempts to get Kelly to tell the police what happened are hampered when her mum Laura appears and tells her daughter to say nothing to the police.

A worried Amy reveals that someone in their class was being nasty to Summer and she ran off, so Paul promises to look for her.

In the hospital, Roy finds Nina packing her bag. Nina explains that she’s discharging herself as she needs to revisit the scene of the attack to try and jog her memory.

Concerned for her wellbeing, Roy talks her out of it. Evelyn returns from her train trip and calls in the café. However, when she’s rude about Kirk’s IQ, Roy likens her vitriol to that suffered by Nina and throws her out.

Having taken a call from the police, Imran tells Kelly they want to ask her some further questions. But Laura’s not having any of it. Asserting that she’s Kelly’s mother and she calls the shots, she drags her daughter away.

Later, it’s revealed that Laura only turned up because her boyfriend threw her out. Laura backs down and lets Imran sit in on the interview.

Paul finds a downcast Summer in Victoria Garden. Summer confides in him how she feels partly to blame for the attack as she should have made Kelly leave when she did.

Evelyn returns to the café and apologises for her insensitive remarks. Roy admits that he overreacted when really he’s just worried about Nina. Evelyn’s sympathetic.

A police officer calls at Number 13 and breaks the news to Abi and Kevin that they’ve charged someone and it would seem the attack was triggered by Nina’s appearance.

As Kevin sees her out, Abi mulls over the news with mounting anger.

Meanwhile, Laura calls at Imran and Toyah’s flat and asserts that once Kelly has been released, she’s coming to live with her as she wants her daughter back. Imran is fuming. When Billy finds out that Summer didn’t turn up for school this morning, he’s concerned.

EMichael and Ronnie see Ed off on his trip to Birmingham. Ronnie makes a couple of light-hearted jibes, but Ed fails to see the funny side and Ronnie feels wretched.

Ronnie confides in Jenny how he wants to prove to Ed how sorry he is, but needs her help. Jenny invites Michael and Grace to The Rovers for free drinks to wet the baby’s head and surreptitiously gives Ronnie a thumbs up.

In the café, Sam enthuses about Treasure Island, the book he’s studying for 11 plus. When Daniel reveals he’s training to be an English teacher, David suggests he could tutor Sam. Daniel calls at No.8 for Sam’s English lesson. He’s taken aback when Sam reveals he’s set him a test to make sure he’s up to the job.