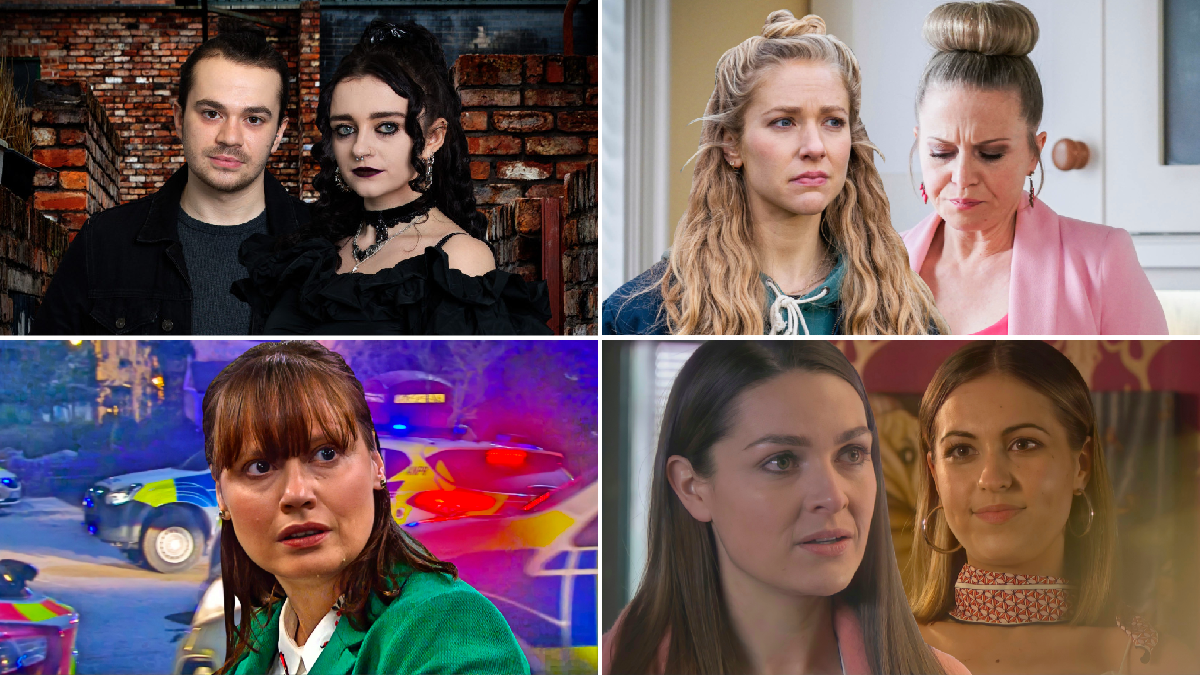 The soaps are showing no signs of slowing down, and it’s safe to say that they kick the month of May off in a rather explosion fashion.

Nina Lucas (Mollie Gallagher) and Seb Franklin (Harry Visinoni) are at the centre of a huge story in Coronation Street, as they’re violently attacked by Corey Brent (Maximus Evans) and his gang.

Meanwhile, Linda Carter (Kellie Bright) continues to meddle in Nancy’s (Maddy Hill) affairs, but the EastEnders favourite is later forced to admit that she thinks she might be pregnant, after something of a dizzy spell.

Yes, it’s quite the week that the land of soap has to offer, and if you fancy a little bit more information on what to expect, you’ve certainly come to the right place!

1. Nick and Leanne are convinced that they’re safe, but they’ve got no idea that Simon gave Peter their address! Peter, meanwhile, is discharged from hospital, and he and Carla set off to the hideout – but they’re being followed. What happens next remains to be seen, but Sharon soon pops by No.1 with flowers for Peter, and while Carla is distracted, Sharon nicks her phone and finds the address of the hideout. She sends Harvey’s heavy around!

2. Seb enlists Nina’s help to scower the internet for a necklace suitable for Abi on her wedding day. On the day of her hen party, Abi asks Seb to give her away, leaving the young man delighted. He presents her with the necklace, and as the hen do gets underway, Abi reveals that she’s never been as happy as she is right now.

3. Corey heads out to meet his mate Eli in a stolen car. Not wanting to let her beau down, Asha jumps in the vehicle – as do Summer and Kelly! They stop at a wasteland, have some beers and turn up the music. Seb and Nina, who are enjoying a romantic stroll, cross paths with the gang, and animosity soon ensues. Corey insults at Nina, while Kelly slaps her! Seb and Nina head off, but Corey and his mates give chase, and the two lovers are subjected to an unprovoked and brutal attack.

4. The police arrive on the street to break the news that Seb and Nina have been attacked. Abi and Roy are devastated, and they race to the hospital, where it becomes clear that Nina has sustained several blows to the head and is undergoing an operation. Seb, meanwhile, has suffered a lot of injuries, but the doctors are hopeful he’ll make a full recovery.

5. Abi asks Kevin to cancel their wedding in the wake of the attack, and tells Seb just how much she loves him, as he’s wheeled away for a scan. Nina, meanwhile, regains consciousness and tells Abi and Roy that all she can remember is coming face-to-face with Corey and his mates.

6. Kelly hides her terror upon returning home. Imran realises she is drunk, however, and berates her – ordering her to knuckle down.

7. Corey assures Abi that he has no idea what happened to Seb and Nina, and he’s just as shocked as she is. Asha overhears, as he claims to have always got along with Nina, and she’s perplexed at such a statement. Corey professes his innocence to Asha, but reckons it’s for the best if she provides him with an alibi.

8. Callum’s doubts about Ben grow, and unable to contain himself, he asks his beau if he had any part of play in Kush’s demise. Ben denies any involvement in Kush’s death, which leaves the young copper somewhat at ease. Ben, however, throws a curveball when he asks that he and his fiancé are honest from here on our, and therefore Callum admits to trying to have Phil put away when working undercover! Ben is furious, and demands answers. Callum, meanwhile, tells his lover that he’ll be waiting at the registry office for him no matter what. Will the soap wedding of the year go ahead?

9. Linda struggles to come to terms with Nancy’s decision, and soon enough the mother and daughter duo are at each other’s throats once again. Mick warns his wife against interfering in Nancy’s life, and Linda agrees to drop it, but she soon resorts to meddling some more, as masquerades as Nancy while making a phone call. The landlady speaks to Nancy’s doctor, but starts to feel faint. When the doctor suggests a check up, Linda is forced to admit that she thinks she’s pregnant!

10. Callum and Stuart’s gran Vi arrives in Walford, and she soon crosses paths with Phil! She demands that he take her for a drink so that they can get better acquainted. Kat spots them together, and Vi’s comments rub Phil up the wrong way – resulting in him storming off! Kat interferes, giving Vi a piece of her mind. Phil is grateful that she stuck up for him.

11. Mitch blames himself for Bailey running away, while Karen blames her old boss. Jack suggests that that do a TV appeal, and they do just that. Karen, however, lets her fears get the better of her, and when nasty comments are left on the fundraising page, her mood worsens. She heads into the Square livid.

14. Sonia’s birthday arrives, and she tries to put on a smile for Dotty. However, she soon realties that she should be going with Martin and Whitney to Dubai, leaving Dotty fuming that her money is being spent on the plane ticket!

15. Moira sets a plan in motion with Cain’s assistance, as she wants to catch Mack while he’s out doing one of his dodgy deals. Mack, meanwhile, assures Charity that he’s been discreet about the job, but Charity knows he’s invited Aaron along! The deal gets underway, but the buyer is furious when he finds a tracker amid the goods in the back of the van! The buyer flees the scene, leaving Mack and Aaron in shock.

16. Liam enlists David’s help in proposing to Leyla. Meena, however, gets the wrong end of the stick and assumes Leyla is trying to steal her beau! Liam gets down one knee and proposes to Leyla, but Meena interrupts. The doc is devastated that his proposal has been ruined, but Leyla – having seen the lengths he’s willing to go to – ultimately says Yes!

17. Lydia considers applying for the pupil liaison job at a school nearby after her counselling session with Vinny was successful. After the interview, she’s overjoyed – having believed that it went rather well. However, she loses her smile when the police arrive in the cafe and arrest her on suspicion of running a scam pension scheme!

18. Jimmy explains to a shocked Nicola that he believes their marriage might have run its course.

19. Liv continues to feel guilty about Paul’s death, and she almost gives into temptation at one point – contemplating having a drink.

20. Brenda realises that her brooch is missing, and begins to suspect that she’s been robbed – and she later accuses Faith of stealing it!

21. Sienna is looking forward to her blind date with a man named Theo, but when Summer gets wind of her adversary hopes of romance, she’s determined to put a stop to it. Summer re-arranges the date and meets with Theo herself – all the while pretending to be Sienna!

22. Joel has a word with Sienna – desperate to convince her to let Warren see the kids again. Sienna, having had a change of heart, tells Warren that if he’s free, he can see Sophie and Sebastian, but warns him that this is well and truly his last chance.

23. Sue Morgan – Luke’s mum – arrives in the village, but her reunion with her son is somewhat frosty. She wants to reconnect, but she brings with her some heartbreaking news. Cindy encourages Luke to tell her about his dementia, but he refuses.

24. Marco applies to be Trish’s new assistant. Trish isn’t so sure if she should employ him, but Fergus reckons she should. Marco later meets with his brother Jacob in the park and it becomes clear that the two have something of a plan up their sleeve for Trish.

25. Sylver surprises Mercedes with a meeting for the Dee Valley Business Woman of the Year award judging panel, but Cher attempts to throw her stepmum off, but questioning her choice of words.