Home » TV and Movies » Counting On's Kendra Caldwell and Christina Caldwell pregnant together again: When are they due?

Counting On's Kendra Caldwell and Christina Caldwell pregnant together again: When are they due?

Kendra Caldwell and her mom, Christina Caldwell, are pregnant at the same time again.

The mother and daughter were both pregnant together for a short time in 2018. Kendra welcomed Garrett in June 2018 and Christina welcomed Isaiah in November of the same year.

When are Kendra and Christina due?

Just a few weeks ago, Kendra Caldwell and Joseph Duggar confirmed they will be welcoming another baby in February 2021. This will be their “tiebreaker” child as they both already have a boy and a girl.

Yesterday, Christina and Paul Caldwell revealed that they were welcoming another child. She is due in May 2021, just three months after her oldest daughter welcomes her third child. This will be her ninth child. Kendra is 22 and will still be when the new little one arrives.

Both Kendra Caldwell and Christina Caldwell vacationed together in Florida recently. The pregnancy announcement for mom came from the beach. Kendra and Joseph Duggar don’t appear to be too worried about the pandemic as they have been spending time with her family frequently since March. 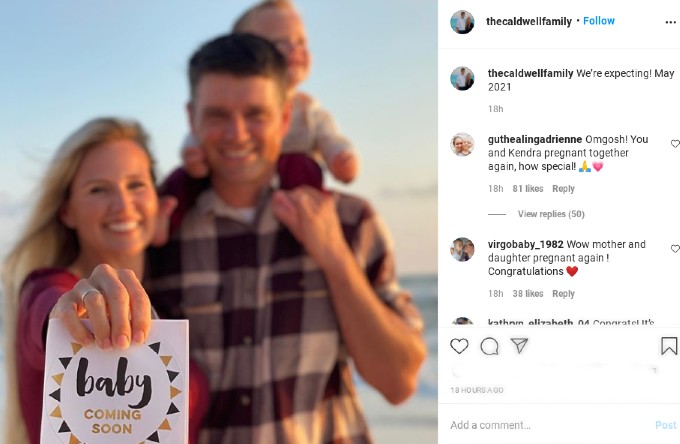 Will Kendra have more children than Christina?

There has been a lot of talk about Kendra and Joseph Duggar being the new version of Jim Bob and Michelle Duggar, and Counting On fans may be on to something. Kendra started having children young, and so far, she has yet to slow down.

Christina Caldwell has waited several years between some of her pregnancies. If Kendra doesn’t slow down, she could easily pass the number of children her mom has and even rival Michelle Duggar.

Of all of the Duggar couples, Joseph and Kendra tend to keep to themselves. They aren’t very active on social media, and other than family gatherings and the arrival of their children, the couple doesn’t even film much.

It will be interesting to see if Christina Caldwell appears more on Counting On with her daughter this season, especially with both of them being pregnant together once again. The first time around, TLC filmed their trip to Florida. Maybe they filmed this time too?

Counting On is currently on hiatus.