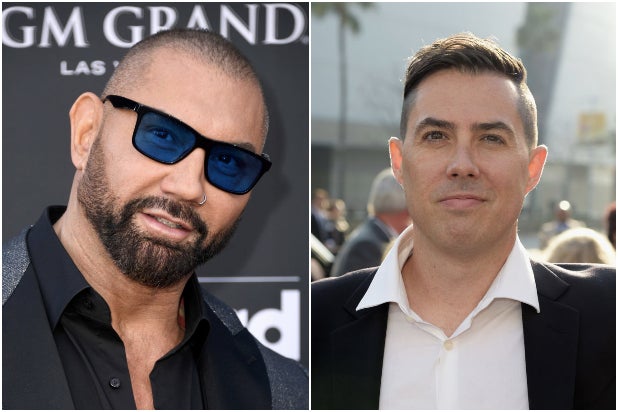 “Universe’s Most Wanted” is about a small town that gets thrust into a fight for the world’s survival when a space ship carrying the universe’s most wanted and dangerous criminals crash lands in their backyard. Bautista plays an intergalactic peacekeeper who teams with the son of the town sheriff to prevent the escape of the alien prisoners and from them taking over the world.

Production will begin on the film in Spring 2021, and CAA Media Finance will represent worldwide sales on the project in the coming weeks. Casting is underway.

“Jeff and I are incredibly excited to be teaming up with Dave, Jonathan and AGC on this project. Scott and Jimmy are terrific writers and have conceived of the perfect sci-fi tentpole that fits perfectly into ASAP’s brand and my directing sensibilities. We couldn’t be more thrilled to get going on ‘Universe’s Most Wanted!’ This is the type of fun mysterious and irreverent adventure we all need right now,” Peyton said in a statement.

The deal was negotiated by AGC’s VP of Legal & Business Affairs Anant Tamirisa on behalf of AGC; by CAA; by Sloane, Offer, Weber & Dern on behalf of Peyton; and by Jackoway Austen Tyerman Wertheimer Mandelbaum Morris Bernstein Trattner & Klein on behalf of Bautista.

Peyton last directed the video game movie “Rampage” starring Dwayne Johnson, which grossed $428 million worldwide. Bautista was last seen in the comedy “My Spy” and will next be seen in “Dune” and Zack Snyder’s “Army of the Dead.”