Spike Lee joins forces with David Byrne for a joyous concert movie that rocks and delights, sending you high and then higher. 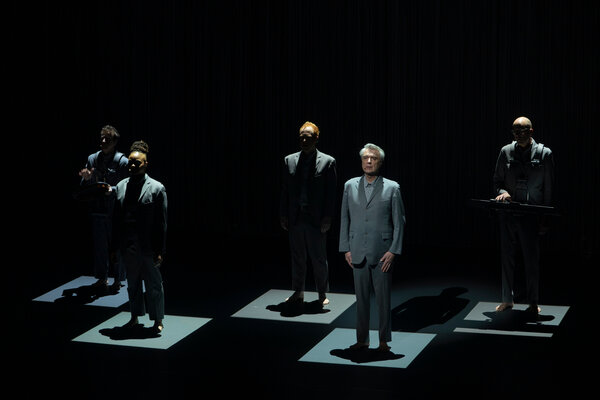 The first thing you should do when you’re ready to watch “David Byrne’s American Utopia” — and you should watch this exuberant concert movie from Spike Lee — is clear some room in front of your TV. Move any chairs, rugs, tables and cats out of the way. Check your sound, crank the volume, press play. It may take a few songs for every part of you to get moving. But by the time Byrne and company perform “This Must Be the Place (Naïve Melody),” you may find yourself levitating.

In a different reality, you might be dancing in a cinema aisle. But while “American Utopia” would look great on the big screen, one of the pleasures of this movie is how well it works (plays) scaled down. It’s a handsome, intelligently visual entertainment — you want to watch and not just listen — but at home, at least, it has a comforting intimacy, simply because of the quotidian aspect of TVs. Important too is Byrne’s vaguely folksy if entirely self-conscious presence, and how this once and future art-school kid continues to vibe more like Mr. Rogers than a veteran rock star.

This quality of intimacy also comes from Lee and how he has adapted the show, which opened on Broadway in October 2019 to euphoric reviews, closing four months later after a limited run. (A return engagement is planned for September 2021.) Invited by Byrne to direct a screen version, Lee shot the movie in February with a small army that included the director of photography, Ellen Kuras, and 11 additional camera operators. It must have gotten fairly crowded in the Hudson Theater, which was visibly packed. You hear and sometimes see audience members, though for the most part, Lee wisely focuses on what’s happening onstage.

The genesis of the show was Byrne’s 2018 album, “American Utopia,” which he soon conceptualized into a stage show. The conceit was blissfully simple, the results rather more involved. The movie sticks to the show’s basics: Byrne and his small battalion perform some 20 songs on a nearly bare stage using a minimum of props. Everyone wears identical, closely tailored shark-gray suits and shirts, the kind you might see on parade at a talent agency; the button-down Byrne of course buttons all his buttons. The formality of these uniforms, though, is amusingly undercut by the fact that almost all the performers are barefoot, as if they’d just been strolling on a beach.

The mixed message created by the suits and feet creates a slight dissonance that vibrates throughout like a sustained chord. This works well both with Byrne’s quixotic persona and with this show’s dynamic contrasts, which smoothly toggle between formality and informality, seriousness and playfulness, irony and sincerity, as the performers dance and march on (and sometimes off) the stage. Questions continue to linger even when the players perform “Toe Jam” (one of a number of Byrne’s collaborative works in the lineup), and Lee goes full-on Tarantino, crowding the screen with close-ups of enviably pedicured feet.

Given how thoroughly Lee closes the gap between you and the performers it’s a wonder he didn’t strip off his socks too. Some filmed stage shows die on the screen from a sheer lack of visual energy and invention. Lee, a master of the art, uses cinema’s plasticity to complement this production, making it come alive in two dimensions. Using a variety of camera angles — the first image is an overhead shot of Byrne — Lee shows you parts of the show that normally only the theater crew would see. At other times, when a camera dives in alongside the musicians and dancers, you fluidly transform into one of the cast and begin grooving to the syncopated beat.

“American Utopia” flows beautifully, with a lineup of songs that transports you back in time (1977, here I come) only to pull you forward (hello, 2018). This helps keep nostalgia at bay, though the audience’s rapturous reception for the Talking Heads standard “Once in a Lifetime” may make you wince self-consciously. (OK, boomers.) In between many of the songs, Byrne talks about this and that, cabaret-style patter that adds to the general, well, friendliness. He talks about voting, introduces the band, teases the audience. At one point, he and Lee pierce your heart with a version of the Janelle Monáe song “Hell You Talmbout.” The world rushes in painfully.

Over all, Lee and Byrne leaven the heaviness with hope, which could be dismissed as a commercial strategy but feels like an underlying ethic. Early in “American Utopia,” Byrne thanks the theatergoers “for leaving your homes.” I felt a pang when he did. The show closed a month before many American cities went into lockdown, and since then I have rarely ventured beyond my neighborhood. Initially, watching this movie, I felt envious of the audience, all those people jammed together, breathing the same air. Then I got into the David Byrne flow, and bopped along: “Ev’rybody’s comin' to my house/I’m never gonna be alone/And I’m never gonna go back home.”