Home » David Zaslav is about to shake up Hollywood as the new Discovery-WarnerMedia chief. Insiders describe an aggressive deal-maker and demanding boss.

David Zaslav is about to shake up Hollywood as the new Discovery-WarnerMedia chief. Insiders describe an aggressive deal-maker and demanding boss.

Pre-pandemic, David Zaslav’s end-of-summer parties in the Hamptons were a legendary networking event for anyone in media. Over the years,  Diana Ross, Rod Stewart, and Harry Connick Jr. performed for an A-List crowd that included Jamie Dimon, Oprah Winfrey, Ron Howard, and tennis star Boris Becker, to name a few.

Zaslav, 61, his wife Pam, and his adult children, mingled with TV and movie industry friends, Page Six, CNBC and Fox News anchors, plastic surgeons, and interior designers. The parties spilled onto the beach and ended with fireworks and shark-shaped cake made by the “Cake Boss.”

But storm clouds were on the horizon. In September 2020, Zaslav confided to a close friend that he was concerned about the fate of the company he’d spent 15 years building.

And even as Zaslav prepped the launch of streaming service Discovery+, which now has 15 million subscribers, he had thoughts about whether to suggest bundling Discovery with Disney, according to a person familiar with talks.

Zaslav wondered how he would stack up against the likes of Netflix and Disney without more content and if he would be forced to sell if he couldn’t get bigger to compete with those companies, with their seemingly bottomless pockets.

The answer would soon come. A missed golf game in February led to an email between Zaslav and AT&T CEO John Stankey, culminating in their boards signing a merger deal on Sunday night.

The combined company, worth $120 billion in enterprise value, would unite Discovery with AT&T’s WarnerMedia, home to CNN, HBO, and Warner Bros.

A person familiar with the deal told Insider that AT&T didn’t consider Comcast a viable partner because it was likely to be a slow-moving conversation, held up by thorny regulatory issues. Zaslav, known for delivering fast yes or nos to business partners, would be able to move ahead with speed.

And now, the former lawyer for Discovery founder John Hendricks is the new king of media, set to oversee $20 billion in content spend, topping Netflix’s $17 billion. Together, Discovery and WarnerMedia will span every genre from Hollywood movies and TV shows to reality TV, to news and sports. Most importantly, they’re already global.

Zaslav is a master deal-maker

Over the years, he’s secured the $1.6 billion European rights to the Olympics and the $2 billion PGA golf rights; bought Scripps Networks, owner of HGTV and Food Network; and launched OWN with Oprah Winfrey.

Zaslav wooed Scripps CEO Ken Lowe for a decade before consummating the $14.6 billion deal in 2018. Lowe remains on Discovery’s board and a personal friend, said a Zaslav friend. “How many people survive after a merger? Usually you ditch people. He doesn’t.”

In another coup, in 2008, Zaslav convinced Winfrey to go into business with him and create a cable channel together.

The Discovery CEO also was early in laying foundations overseas, where rival media companies are now trying to bulk up.

“It’s the only media company that I’ve worked with in the last two decades where building a unified global presence was a core part of the strategy,” said Joe Ravitch, co-founder of Raine, the media-focused merchant bank.

“Plus, David actually shows up. You couldn’t say that about a lot of other American CEOs. Talk to David about European or Latin American TV, and he knows the details and the people there.” Zaslav is on the board of Mexican programming giant Televisa, now merging with Univision. 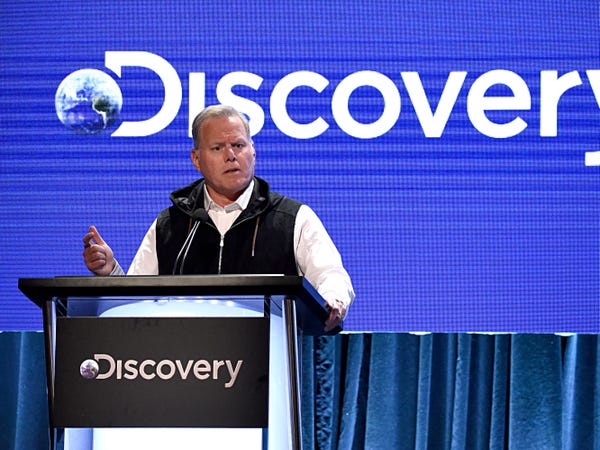 ‘He’s more aggressive than one of the great whites on ‘Shark Week.’

Yet Zaslav’s fight for Scripps created bad blood with then-Viacom chief executive, Bob Bakish, who was significantly outbid on the deal.

“He’s masterful at presenting himself as an aw-shucks guy from Rockland County, but underneath in the middle of a deal he’s more aggressive than one of the great whites on ‘Shark Week,'” said a friend.

Zaslav is also known as a CEO who keeps a tight rein on programming costs. He’s unsentimental and quick to rotate executives if they are not performing, though his key aides have been with him for years.

“Sometimes it is difficult for his staff to keep up with his expectations…but this is characteristic of a good leader who is on a mission,” Discovery founder John Hendricks said of Zaslav.

He’s also known for squeezing costs out of operations, which could concern WarnerMedia employees who’ve already been through years of restructuring under AT&T. The combination has promised $3 billion in synergies.

Indeed, after the Discovery and Scripps deal, Zaslav promised to wring $350 million in synergies from the business, but by the time the integration was done, the Discovery boss had cut his way to $1 billion.

Brooklyn-born Zaslav attended high school in Rockland County, where he was captain of the tennis team. His Facebook page is full of old school friendships and trips with the former GE CEO, Jack Welch.

He’s known for sporting the sleeveless fleece vests popular with financial industry executives and for bringing swag bags to meetings.

Zaslav is also one of the highest-paid CEOs in media history. His 2020 pay was $37 million, and the WarnerMedia deal would entitle him to some 14.8 million in options, worth $190 million, according to The Wall Street Journal.

He’s used his salary to buy some of the most sought-after real estate around, buying the Hollywood home of “The Godfather” film director Robert Evans for $16 million and snapping up Conan O’Brien’s apartment on Central Park West. His Greenwich Village home where the WarnerMedia deal was cooked up is now on the market, according to The Hollywood Reporter.

The Discovery Channel started in 1985 with a documentary about the frigid waters of the North Atlantic. It’s now available in every corner of the globe.

Running WarnerMedia’s top-tier assets like HBO and spending big on movies and shows is a far different game from the unscripted business that’s Discovery’s bread and butter.

But Zaslav is likely to get at least a warm initial reception. One Warner executive told friends that Zaslav’s unexpected arrival would bring structure and order versus the “move-fast and break things” style of the WarnerMedia’s current chief executive, Jason Kilar, whose future with the company is still unclear. And maybe, those legendary parties might start again.