Home » TV and Movies » ‘Devs’ Finale: Alex Garland on Making an Ending That Wrestles with the Very Nature of Existence

‘Devs’ Finale: Alex Garland on Making an Ending That Wrestles with the Very Nature of Existence

[The following interviews include spoilers for the “Devs” finale.]

“Devs” is far from an outlier for Alex Garland. The proof is right in the title.

As Amaya CEO Forest (Nick Offerman) reveals near the ending of the finale, the “Devs” project that keeps the entire series within its pull is a thinly veiled quip about a kind of cosmic power. Swap the “v” for a de-Romanized “u” and you get the Latin word for “God.” It’s not too far from how Garland originally saw that part of the story, especially in the context of his past work.

“It actually began privately as a sort of joke, because ‘Ex Machina’ comes from the longer phrase of ‘Deus ex machina’ and I did think of this in some respects as a companion piece,” Garland told IndieWire.

The AI themes of his 2014 film find a complement in the way “Devs” handles the fundamental nature of human existence. Against a backdrop that has plenty elements of a sci-fi thriller, “Devs” has been slowly unspooling a story about the nature of choices, multiple iterations of a single point in time, and whether someone has the ability to make a truly singular decision controlling their fate.

That conflict comes to a head when Lily, infiltrating the shimmering golden cube that represents the team’s extensive work, brings about the ending that Forest and Katie (Alison Pill) have been anticipating all along. Presented with a view of the immediate future, the three of them carry out that vision, even as it means the destruction of both the enabling technology and their lives.

In order to translate that story idea to the screen, Garland felt the need to film those scenes in sequence, in order for everyone to better track all the psychological maneuvering bubbling under the surface.

“The entire eight episodes lead to that state. How would anybody be able to inhabit the character if they hadn’t done all the proceeding stuff that led to that moment? I think that would be really hard,” Garland said. “And certainly from a directorial point of view, I feel like I’d be working on guesswork. ‘I think this is kind of what’s going on, I think this is what you feel. I think maybe we should shoot it like this.’ But if you’ve lived at all, then we all know, together.” 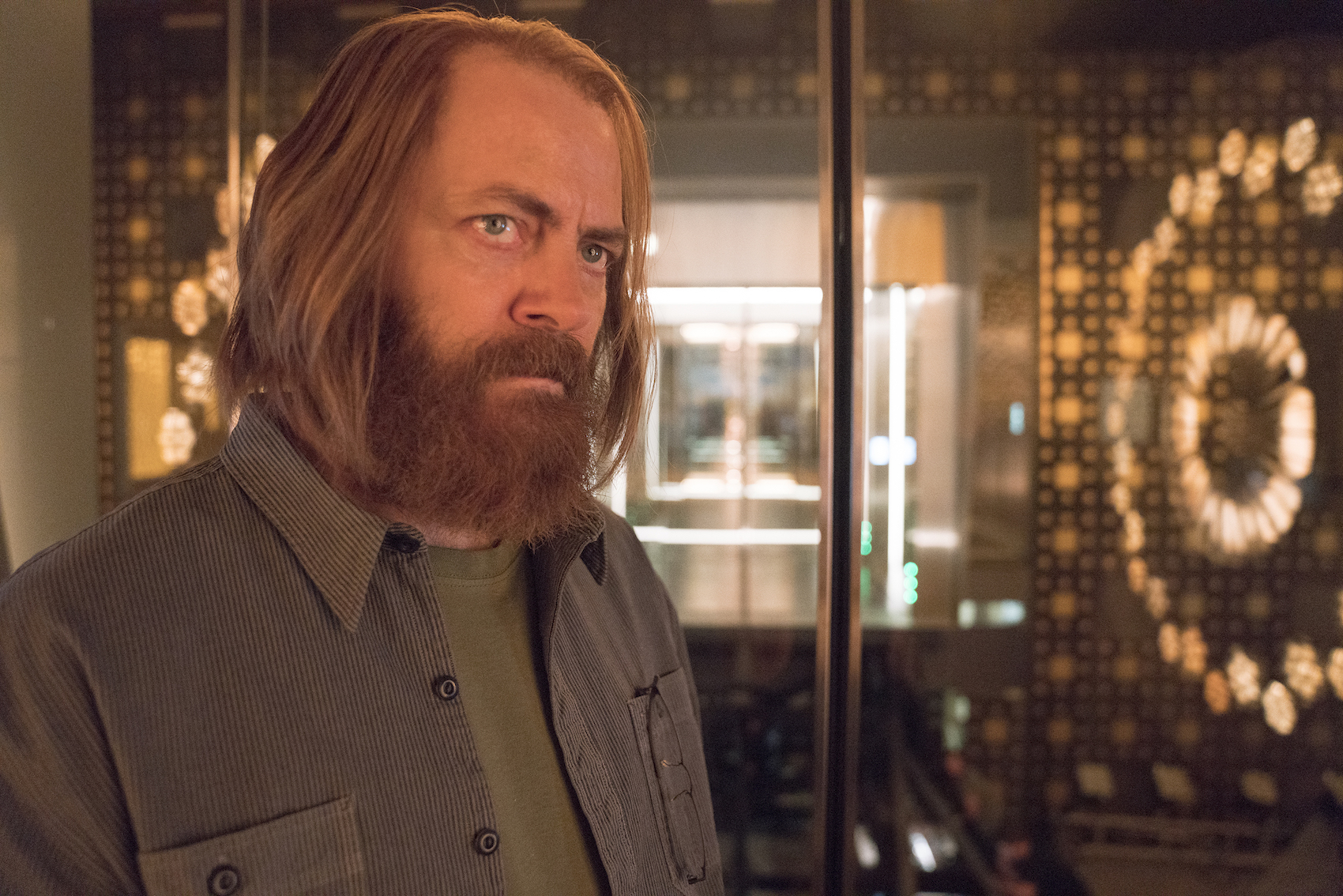 Conceptualizing and executing that “keypad at gunpoint” scene in multiple versions was a distinct challenge for the cast as well.

“Those last couple days around that whole sequence were completely bonkers and surreal. The place that Sonoya and Alison and Stephen [McKinley Henderon] and I were required to be in. It was really, really surreal,” Offerman said. “In so many things you would work economically, where can we use the same shot, cut down the shooting day, etc. With Alex, it just never even occurred to him to not do it both times. So that even if it looks exactly the same, he can skew it in a way so the shot, the angles are slightly different.”

“Devs” is certainly a show that hasn’t shied away from religious iconography. The word “messiah” gets dropped into the finale in one of the most ominous ways possible. Lily’s final earthly moments are spent — much like the undercover protector outside her apartment is shown in last week’s episode — in a kind of crucifixion pose. Her sacrifice dovetails not just with one of the images that first ensures the Devs team is on the right track with their gaze-into-the-past technology, it’s tied into a philosophical quandary that Garland considered while writing the series.

“It’s to do with a paradox in literal Christian thinking, to do with Adam and Eve, specifically Eve,” Garland said. “You have a sense of God who’s fundamentally presented as omniscient, all-knowing, all-powerful. And then you have Eve, who is punished for an act of free will. And the problem is: If God is all-knowing and all-powerful, he knew at the moment he created her that this is what he would do. Or Eve has free will, and is being punished for making a bad decision, in which case God is not all knowing and all powerful.”

Garland said that he hopes that Lily’s actions in the finale, which by the show’s internal logic would constitute the first instance of a human exerting the idea of free will, give audience members a chance to grapple with that idea, regardless of their beliefs.

“I say this as an atheist, but I’ve always found it problematic that dissonance is never properly addressed. But you don’t need to know the mind of God for this to be a paradox,” Garland said. “I would love it if people thought about, ‘Why is this imagery here? What is it about Lily’s actions?’ And then to have a dawning sense of an argument being made. The problem with overtly making arguments is that people usually know what they feel about the argument before it’s presented. They’re agreeing with it or they’re disagreeing with it, but there’s no internal sense of being open.” 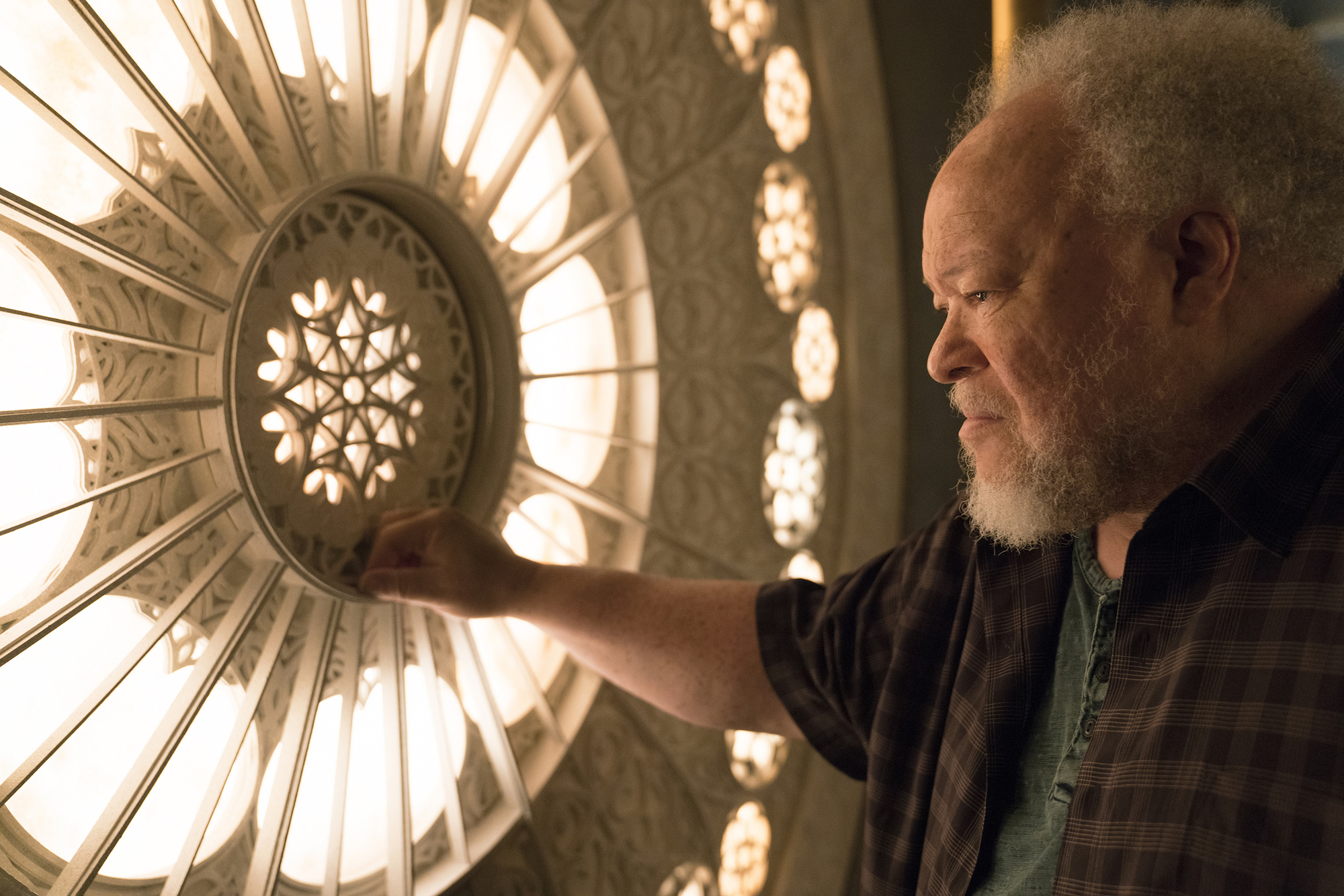 In its final hours, “Devs” directly engages with language. One of the most striking sequences as the show comes to its conclusion is Stewart (Stephen McKinley Henderson) delivering a pair of poems against a strikingly lit hallway. An excerpt from Phillip Larkin’s “Aubade” helps give voice to a man coming to terms with what he’s helped to create.

“The sequence of Stephen reading the Larkin poem, it was like a dream for me, like being in a dream. Honestly, it was a real kind of ‘pin drop on the set’ moment,” Garland said. “My dad came up, the first time my dad has ever seen me at work. He’d never been on the films I’d worked on and he came up to hear Stephen read Phillip Larkin. And everyone was hypnotized. It’s a very beautiful poem, and it was a terrific day.”

Whether the audience sees Stewart as a villain or an instrument of fate, he’s the one that eventually pushes the button that sends the whole project literally crashing to the ground. The weight of that story responsibility wasn’t lost on Henderson, but the delivery of those words presented an even greater task.

“My concentration was primarily on the poetry. That’s where my my head was,” Henderson said. “The best thing for an actor is to not know and discover. So even with myself, I had to wait to find out if I had the courage to do what I was going to do.”

Moments like that underline why “Devs” stands as an episodic story. Garland insists that this juggling of lofty ideas and patient execution couldn’t have been done justice in a different format.

“There’s large sections of [Episode] 7 and 8 that you just wouldn’t be able to do in a feature film. Either because you didn’t have the time, or in a way because you didn’t have the permission. Feature films are often about distilling. But there’s something about the sheer length of time it unfolds,” Garland said. “You can have a conclusion that is the length of the feature film. That’s an extraordinary thing to be able to have. I feel it is completely bonded only to being a television experience. For me, with this cast and this collective on 7 and 8, that’s the best work I feel I’ve ever done, that I’ve ever been a part of.”

“Devs” is now available to stream in its entirety via FX on Hulu.