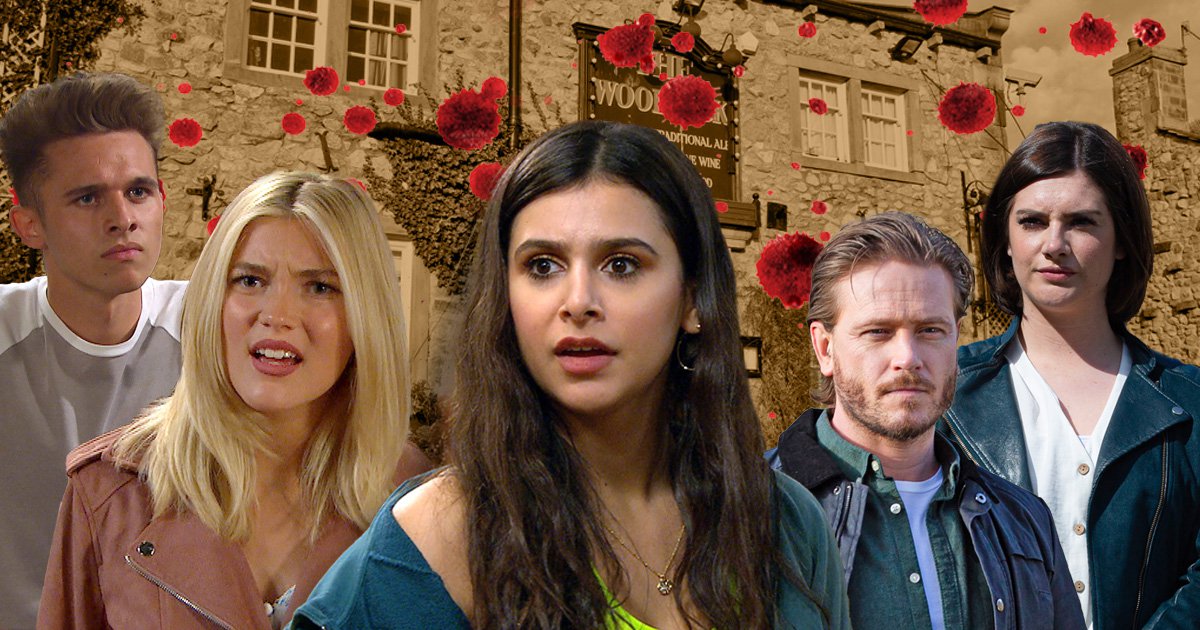 Emmerdale is set to air a huge twist next week when menacing Meena Jutla (Paige Mandhu) resorts to murder, leaving a major character dead in her wake.

Meena has been confirmed as an empathy lacking sociopath who will take down anyone in her way – which one character finds out to their peril next week.

So who will have their blood shed as she strikes?

Jacob is a massive stumbling block in Meena’s way – David is spending more and more time with his son and Meena feels attention starved. This is a woman who does not like to be sidelined. Ergo – Jacob must go. And when he changes his mind about going travelling, what steps will she take?

Joe-Warren Plant said: ‘Jacob is unnerved after her subtle threat and he has seen first-hand acts of authority and manipulation used against him so I believe it triggers something in his brain that takes him back to that dark place. Making him feel slightly scared in a way.

‘There is definitely strong tension between the two characters and Jacob is distrustful. However, I don’t think he is fully aware of her intentions or what she is capable of.

‘Jacob is very much in danger. Especially when there’s a killer so close to home.’

Manpreet tells Liam that she wants to give her old travelling rucksack to Leanna to take on her travels, unaware that Meena has some personal possessions hidden in it. Meena confronts Manpreet about the rucksack and Manpreet tells her she gave it to Liam for Leanna.

Later, Leanna is in her bedroom and is creeped out when Meena enters and asks for the rucksack. How far will Meena go to get her possessions back?

Mimi Slinger shared: ‘Leanna seems to be completely oblivious to Meena’s dark side. She is usually quite cautious with people but no alarm bells have gone off concerning Meena.

‘Leanna has her whole life ahead of her. What a tragedy if it was to be taken away so cruelly. There are numerous people who could meet their harrowing end this week. Yes, Leanna could definitely be one of them.’

David and Victoria arrange to look after their babies together. The sparks are starting to fly between them as they enjoy each other’s company. Later, caught up in their moment, David leans forward and kisses Victoria. If Meena finds out, how far will she go to make sure no one goes near her man?

Isabel Hodgins sighed: ‘I think if Meena can’t have her man then no one can. She doesn’t think like an average person and I for one would not want to be on the receiving end of Meena when she is in revenge mode. Victoria is out of her depth when it comes to Meena.

‘Meena can say some very cutting things but she can also be the life and soul of the party. It’s a far cry from how Victoria feels at the moment. I don’t think she suspects what type of person she actually is.’

David is Meena’s end goal, but as Isabel says, might it be a case of if she can’t have him then no-one can? If David dumps her for Victoria or he finds out her threats to Jacob, will Meena lash out as she realises she is losing him?

Matthew Wolfenden said: ‘After everything that happened with Maya, I’m sure he would want to be as far away as possible from the person Meena actually is. He has his niggles about Meena but I don’t think anything could prepare him for just how far she’ll go to get what she wants.

‘You do not cross Meena and if you do so, you do it at your own peril. I doubt Meena actually loves David and he’s probably more of a possession than anything else. If she can’t have possession over him then no one will! David and Victoria are in real danger.’

Meena has also crossed swords and paths with other villagers. We know that she doesn’t have the best bond with her sister Manpreet so could she silence her sibling as she gets set to expose her? She let part of her past out to Diane too but if Diane learned the full truth of her friend’s death, Meena would have to silence her. Rishi and Priya are also characters who could be in danger while Wendy may find out about Victoria’s kiss with David and head to tell Meena – at her peril.

Paige Sandhu said: ‘Meena won’t kill for the thrill, she’ll kill simply because someone is in her way and she always gets what she wants. To her, it seems perfectly reasonable that she would murder someone who is standing in the way of something she wants.

‘I believe Meena was born without the ability to empathise with others and that can make a person very dangerous.