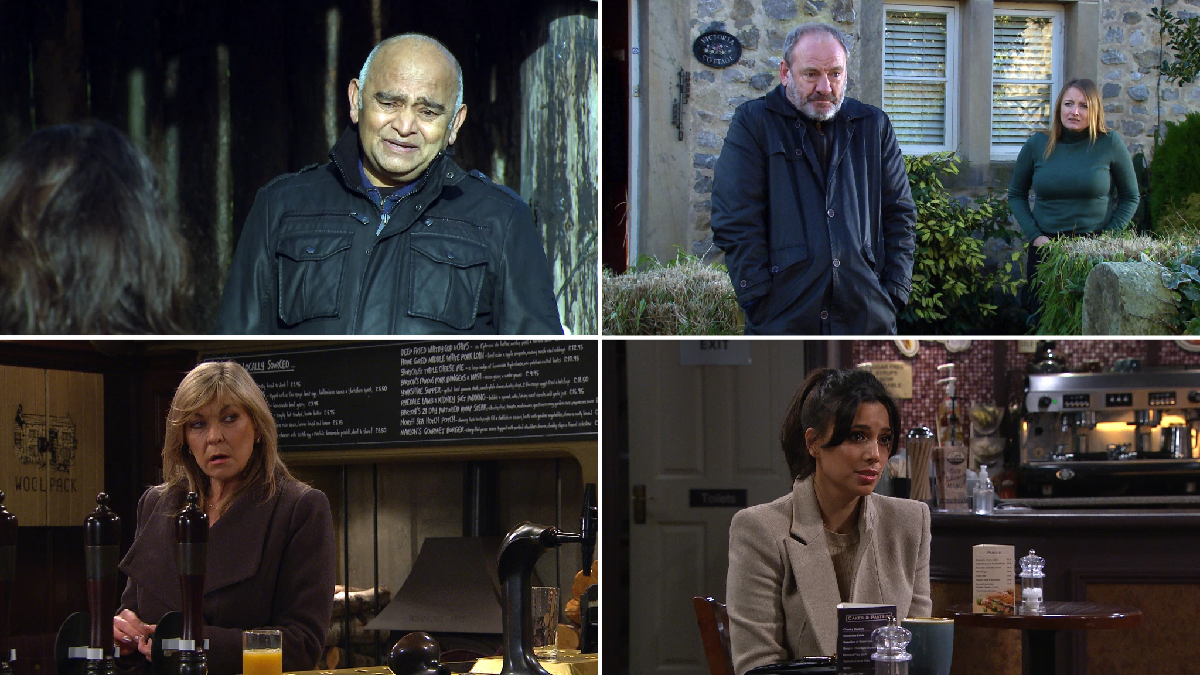 The Tates of Emmerdale are at their most evil as Jamie Tate (Alexander Lincoln) contemplates leaving Gabby Thomas (Rosie Bentham) alone in agony as she fears losing her baby while Kim (Claire King) takes her revenge on Dawn Taylor (Olivia Bromley).

Elsewhere, Harriet Finch (Katherine Dow Blyton) heads closer to the edge as the exhumation takes place – will the truth come out?

After receiving mixed messages from Dawn, Jamie confronts her and she admits she has feelings for him. They kiss, but Gabby watches them and is devastated.

Soon afterwards, Gabby confronts Jamie and demands to know why he has been pretending to care. She realises that he was only trying to keep her on side to discourage her from having the baby.

Gabby suddenly feels dizzy and takes a nasty fall. She calls out to Jamie for help, but he watches without a word as she passes out, clutching her stomach.

Meanwhile, Nicola and Jimmy are worried when she opens a solicitor’s letter from Juliette, wanting to formalise the arrangement of her seeing Carl.

Elsewhere, Ellis questions Priya’s motives. He tells Priya it wouldn’t work between them.

Jimmy vents his frustrations to Nicola over the Juliette situation.

Unseen, a photographer takes pictures of them and flicks through the damning-looking images.

Dawn rages at Jamie after Kim filled her in on his attempts to trick Gabby into having an abortion. She leaves to clear her head, but agrees to give Jamie one last chance so long as he stays honest. They tentatively admit they love each other.

Unseen, Kim glowers in the background, her plan to break them apart having been thwarted.

Meanwhile, Jimmy and Nicola continue to be watched.

Kim is aware that Dawn has a meeting with the social worker at the pub. She creates a distraction, allowing her to spike Dawn’s drink. Could this could blow Dawn’s chances of getting Lucas back?

Meanwhile, staring at the grave where Malone was once hidden, Harriet is full of dread when Charles confirms that the exhumation will happen tomorrow.

Elsewhere, Manpreet is caught off guard when Rishi suggests renewing their vows.

Will Charles admit his feelings for Manpreet?

Meanwhile, Gabby is overcome with anger.

Elsewhere, Dawn is determined to have it out with Kim.

Charles leads himself and Harriet in a prayer for Richard, the man being exhumed. Harriet is restless, wanting to be left alone.

When one of the foremen is startled by something unusual at the digging site, Harriet freezes with fear.

Meanwhile, Jamie threatens to move out of Home Farm. Kim calls his bluff, pointing out he’d have nothing without her and telling him to step up or step aside.

Jamie quietly assents, but is he going to live under Kim’s rules like this forever?