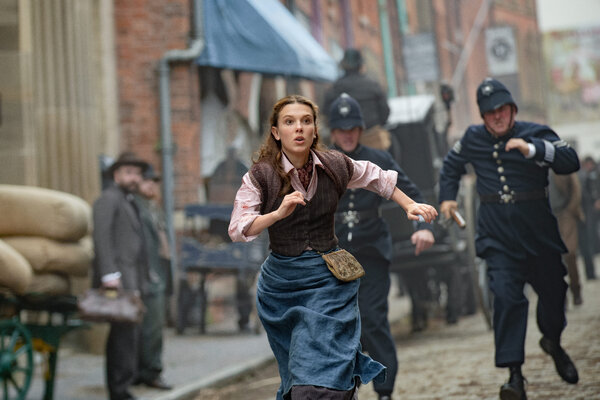 Enola Holmes is back, and she’s ready for both her first official case as a detective and, work schedule permitting, some romance. Millie Bobby Brown delivers an understated, playful performance in the follow up to the Netflix young-adult mystery “Enola Holmes.” This time around, the director Harry Bradbeer and the screenwriter Jack Thorne forgo prolonged dialogue when Enola breaks the fourth wall, making more room for Brown’s intense looks and physical gestures to resonate.

Working in the shadow of her famous brother, Sherlock (Henry Cavill), Enola realizes that independent, professional women are treated more like suspects than like trusted investigators in Victorian England. So it makes sense that her first case comes from a fellow young woman, Bessie (Serrana Su-Ling Bliss), who needs to track down a missing co-worker at a matchstick factory where women workers are mysteriously dying of typhus. (This plot point was inspired by the women who orchestrated the 1888 Match Girls Strike in London.)

Sherlock himself is working on a case of stolen government funds, and the siblings eventually discover their cases are in fact linked. As Enola finds she can hold her own, both alongside and without her brother, a sheltered girl gives way to a young woman who embraces the literal and figurative fighter in her, finding solidarity with working-class women in the fight for women’s rights in the process. As Edith, a suffragist leader and jiu-jitsu master played by a steadying Susan Wokoma, proclaims in the film: “You can’t control Enola. She’s a force of nature.”

Speaking of the movie’s well-choreographed fight scenes, when Enola’s mother, Eudoria (a delightful Helena Bonham Carter), and Edith band together to beat the heck out of grown-men assailants, one can’t help but cheer on this Y.A. feminist tale as a welcome addition to the Sherlock Holmes universe.