Home » TV and Movies » ‘Everything Everywhere,’ All Through Awards Season?

‘Everything Everywhere,’ All Through Awards Season?

At a screening filled with Oscar voters, Michelle Yeoh, Ke Huy Quan and the directors marveled at the way their quirky film has struck a chord. 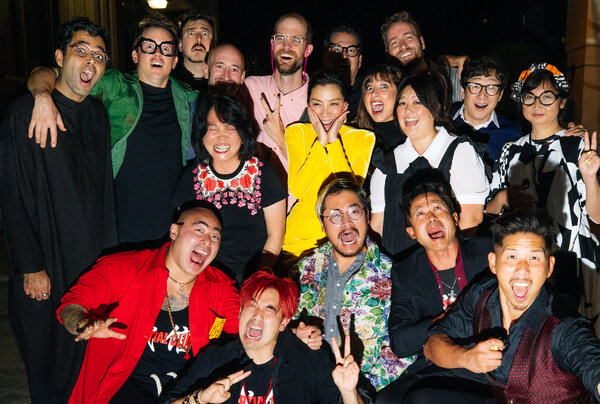 LOS ANGELES — You make a movie because you hope people will respond to it, but no one involved with “Everything Everywhere All at Once” expected all of this, the cast and crew kept telling me in the reception area of a luxe Westwood theater on Tuesday night. The “this” in question was a tastemaker party with Oscar voters and industry veterans meant to reposition the indie hit as an awards contender. But the bigger “this,” the one that really boggled them, was the fact that they were embarking on a monthslong awards campaign to begin with.

“We did press all through the summer, and then took a break and thought, ‘This will all die down. The feelings will die down, the excitement will die down,’” said Daniel Kwan, who co-directed the film with Daniel Scheinert. “And then we came back and somehow it’s gotten even stronger. At one of the screenings, someone came up to me and said, ‘This is my 14th time watching the movie!’”

Passion counts for a lot during awards season, and “Everything Everywhere” has plenty of it: This sci-fi comedy about a Chinese immigrant and laundromat owner (Michelle Yeoh) who becomes the multiverse’s last hope earned stellar reviews in its March release, played for several months in theaters, and made more than $100 million worldwide on a $14.3 million budget. In doing so, it became A24’s highest-grossing title and reinvigorated a specialty-film market that has been ailing since the pandemic began.

Though I expect the film will be nominated in several categories at the Oscars, including best picture, it hasn’t taken a traditional path toward that goal. Instead of debuting at a prestigious fall film festival, “Everything Everywhere” chose a raucous spring premiere at South by Southwest, and it was released in theaters on March 25, a time when awards attention was trained exclusively on the Oscar ceremony held that weekend.

“I full-on thought it was a joke when this was coming out and they said, ‘What if it’s awards-y?’” Scheinert said. “It was an ode to ‘Jackass’ and Stephen Chow movies!”

Still, there is a potent emotional core to the film that has moved audiences: As Yeoh’s Evelyn explores the multiverse, she comes to better understand the people who used to get on her nerves, including her husband, Waymond (Ke Huy Quan), daughter, Joy (Stephanie Hsu), and even her tax auditor, Deirdre (Jamie Lee Curtis). And that empathy extends off the screen, to the movie’s stars: Quan, the first actor to show up at the party, was mobbed by well-wishers eager to praise his sensitive performance. “I was so famished for a role like this,” the 51-year-old Quan told me. “Famished!”

After breakout child-star parts in the 1980s as Short Round in “Indiana Jones and the Temple of Doom” and Data in “The Goonies,” Quan’s good fortune quickly evaporated. “I was faced with a horrible reality and I had to step away because the phone stopped ringing,” he said. “Hollywood didn’t write roles for Asian actors.”

In 2000, a disillusioned Quan moved behind the camera to work in stunt choreography, though he continued to pay his Screen Actors Guild dues every month without question: “Maybe subconsciously, I was thinking, just be patient.”

After watching “Crazy Rich Asians” in 2018, he was inspired to return to acting and called an agent friend to represent him; two weeks later, that agent sent him “Everything Everywhere,” which let him play a character who was underestimated, sweet-natured, fierce and romantic all at once.

“To have this as my comeback movie and to get this recognition and warm embrace? I’ve cried so much in the last six months from reading the comments or from people coming up to me,” Quan said.