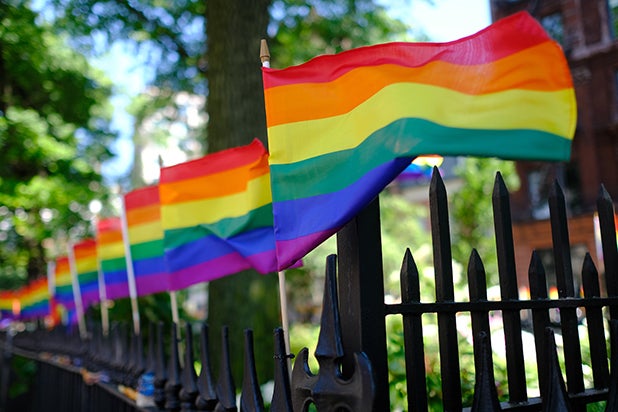 FX’s upcoming docuseries about the fight for LGBTQ+ civil rights in America, “Pride,” has set its full director slate and lined up a May premiere date at the cable network.

The six-part series, which will begin with the 1950s and work forward through the decades, will see six LGBTQ+ directors explore stories ranging from the FBI surveillance of homosexuals during the 1950s Lavender Scare to the “Culture Wars” of the 1990s and beyond. Civil rights pioneer Bayard Rustin, writer Audre Lord and Senators Tammy Baldwin and Lester Hunt are among those interviewed for the series.

The series will premiere with its first three episodes airing back-to-back on May 14. The second half of the series will air the following week on May 21.

Read episode descriptions and bios for the directors below.

A revealing look at the vibrant and full lives lived by queer people in the 1950s amidst a steep rise in governmental regulations against the LGBTQ+ community led by Senator Joseph McCarthy, who ushered in an era of government-sanctioned persecution. Directed by Tom Kalin.

Tom Kalin’s work traverses forms and genres, from feature films to short videos and mixed media installations to activism. His first feature, Swoon, was part of the “New Queer Cinema” and awarded prizes at the Berlin International Film Festival, Stockholm International Film Festival, Sundance Film Festival and Gotham Awards. His next film, Savage Grace, starring Julianne Moore and Eddie Redmayne premiered in the Directors’ Fortnight at the Cannes Film Festival. As a producer, Kalin’s films include I Shot Andy Warhol and Go Fish. He was co-writer of Cindy Sherman’s Office Killer. Kalin was a founding member of the AIDS activist collective Gran Fury, known for its provocative public projects; they are in the collection of MoMA, the Whitney Museum and The Smithsonian. In 2016, a retrospective of Kalin’s films was held in Istanbul and in 2018, his films were installed in the museum show Music for the Eyes in Siena’s Santa Maria Della Scala. With frequent collaborator Doveman (Thomas Bartlett), Kalin exhibited at Participant Inc. and Dublin’s National Concert Hall. Bartlett, Kalin and Mandy Patinkin have collaborated on a series of videos including a cover of Laurie Anderson’s From the Air, which was integrated into Patinkin’s 2019 live tour. Kalin is a Rockefeller and Guggenheim Fellow and has twice been included in the Whitney Biennial.

Even before Stonewall, Pride took root in the 1960s when lesser-known heroes from marginalized communities, including queer girls of color and trans women, played an integral role in the advancement of the movement. Through activism and protest, small and large, the LGBTQ+ community struggled for rights, acceptance and equality. Directed by Andrew Ahn.

Andrew Ahn is a queer Korean-American filmmaker born and raised in Los Angeles. His feature Driveways, starring Hong Chau and Brian Dennehy, premiered at the 2019 Berlin International Film Festival. The film was nominated for two Film Independent Spirit Awards. Ahn’s first film, Spa Night, premiered at the 2016 Sundance Film Festival and went on to win the Independent Spirit John Cassavetes Award in 2017. He has promoted diversity in the arts by mentoring youth filmmakers through programs like Pacific Arts Movement’s Reel Voices, Outfest’s OutSet and the Sundance Institute’s Native Filmmaker Lab.

In this personal journey, Cheryl Dunye interweaves archival footage, personal testimonies and interviews to show how the 1970s helped forge a national movement, from the first Gay Pride march, to the rise of artists like filmmaker Barbara Hammer and poet Audre Lorde, to the confrontation of intersectional feminism and the backlash and opposition from the religious right. Directed by Cheryl Dunye.

Cheryl Dunye is a world-renowned African American director, writer and actress. She first emerged as part of the “Queer New Wave” of young filmmakers in the early 1990s. Her first feature film, The Watermelon Woman, won the Teddy Award for Best Feature at the 1996 Berlin International Film Festival. The film, now considered a classic, was restored and re-released widely in 2016 for its 20th anniversary and resides in the permanent cinema collection at the Museum of Modern Art in New York City. Her second feature, HBO’s Stranger Insider, premiered at the Sundance Film Festival in 2002 and was nominated for four Independent Spirit Awards including Best Director. In 2004, she directed My Baby Daddy for Miramax, which had a budget of $12M USD. Her more recent independent features, The Owls (2010) and Mommy is Coming (2012) have both screened at top-tier festivals and garnered her a new generation of fans and followers across the globe. In recent years, Dunye has entered a new wave of her career as a director for episodic television, first by joining Ava DuVernay and Oprah Winfrey for two episodes on season two of OWN’s Queen Sugar. In 2019, she served as the producing director of Queen Sugar season four. Her other episodic directing credits include an incredible array of popular shows — Claws for TNT, The Fosters for Freeform, Love Is for OWN, The Chi for Showtime, Star for FOX, Dear White People for Netflix, David Makes Man for OWN, Lovecraft Country for HBO, All Rise for CBS, among others. In 2015, Dunye’s multiple award-winning short film, Black Is Blue, was named one of the top five “Must See Feminist Films” by IndieWire. It is now being developed into a feature film with Laverne Cox attached to star in the lead. In 2016, Dunye was named a recipient of the prestigious Guggenheim Fellowship in the field of filmmaking. That same year, she was invited to the Academy of Motion Picture Arts and Sciences (AMPAS). In 2018, it was announced that Cheryl would adapt and direct a feature based on Jason Mott’s novel The Wonder of All Things. In 2019, she launched her Oakland-based production company called Jingletown Films, which is actively developing two episodic series — The Gilda Stories, an adaptation of the beloved 1991 queer vampire novel by Jewelle Gomez and Adventures in the 419, based on Nigerian scammers.

New York City in the 1980s, reinvigorated by the prior era’s sexual revolution and the ascendance of the Gay Liberation Front, saw an influx of queer people to downtown Manhattan and the rise of the underground ball scene. At the same time, the AIDS epidemic devastated the gay community as Ronald Reagan and his Moral Majority refused to intervene. Directed by Anthony Caronna and Alex Smith.

Anthony Caronna is an award-winning director who over the past decade has transitioned from experimental live theater to filmmaking. His work has been featured on MTV, VH1, Vogue, Dazed, HuffPost, Rolling Stone, Paper Magazine, Bullett, Out and VICE. He has been banned from YouTube and awarded Vimeo Staff Picks. Caronna has carved out a place for his aesthetic within the New York City film scene. In 2015, he directed the feature-length work Success, an experimental concert film for musician Liam Finn that premiered at the Museum of the Moving Image. In 2017, he debuted his first feature documentary Susanne Bartsch: On Top, which has gone on to win the John Schlesinger Award at the Provincetown International Film Festival (PIFF).

The 1990s were supposed to herald a new era for the LGBTQ+ community. With the election of Bill Clinton, they finally had an ally in the White House – or so they thought. The Culture Wars were in full swing, and being fought everywhere from Capitol Hill to movie theaters to churches. They devastated communities but also galvanized LGBTQ+ people to create policies and organizations that still fight for equality today. Directed by Yance Ford.

Yance Ford is an artist working in film based in New York City. His debut film, Strong Island, won a Sundance Film Festival Special Jury Prize, the Gotham Independent Film Award for Best Documentary and the Black Film Critics Circle Award for Best Documentary. Strong Island was also nominated for Best Documentary Feature at the 90th Academy Awards®, where Ford made history as the first openly transgender director nominated for the Oscar®. The film won the Primetime Emmy® for Exceptional Merit in Documentary Filmmaking. Ford is also a former series producer of the PBS documentary series POV. His curatorial work there was recognized with five Emmy Award wins and 16 Emmy nominations. Ford is a MacDowell Fellow, a member of the Sundance Institute Collective and was awarded a Guggenheim Fellowship in 2019. He profiled of former Illinois Governor Rod Blagojevich in the Netflix series Trial by Media and directed the 90’s episode of the FX series PRIDE.

The 2000s ushered in a new age of queer visibility where gays and lesbians were gaining acceptance in the mainstream media. But even as cisgender white members of the LGBTQ+ community found a place in society, the struggle for trans rights continued, and that fight has only in the present day taken the main stage. Directed by Ro Haber.

Ro Haber (they/them) is an aesthetically-minded writer/director whose work spans narrative, documentary and new media. They were a 2018 Sundance Momentum Fellow and a 2017 Sundance New Frontier Lab Fellow. They were selected for the Universal Pictures Directing Lab, American Film Institute’s Directing Workshop for Women, Film Independent’s Episodic Lab and Project Involve, Outfest’s Screenwriting Lab and were a 2018 Ryan Murphy HALF Program fellow, shadowing on FX’s Pose. They were featured on the Alice Initiative’s 2018 list of directors ready to helm studio films and listed by IndieWire as one of the Eight Best Trans Directors Working Today. They have also been an artist fellow at Yaddo and MacDowell Artist Colonies. They won a Webby, New Orleans Film Festival and LA Film Festival Awards and were nominated for a GLAAD Award for their docuseries New Deep South, which premiered at the Tribeca Film Festival. Their doc series Braddock, PA for Topic.com gained critical attention from The New York Times and The New Yorker. Haber spoke about virtual reality and empathy at the Engadget Experience: Alternate Realities conference, which showcases the latest thinkers in virtual and augmented reality, and Sundance’s VR Creator panel at Outfest. They participated in the 2018 DevLab curated by Oculus and RYOT. Haber is interested in questions of queerness, family, technology and futurity.