Game of Thrones fans did not know what to expect in the final episodes of the HBO show last year. While many viewers were convinced Daenerys Targaryen (played by Emilia Clarke) would come out victorious in the show, she was unfortunately killed off by her lover, Jon Snow (Kit Harington).

While this scene will forever go down in history as one of the most unexpected twists in TV history.

However, fans have now been dissecting the scene, and have noticed some problems with it.

Viewers will remember Jon arrived to talk with Daenerys before he hugged her one final time.

During this deceit he stabbed his queen, leaving her to die in the snow. 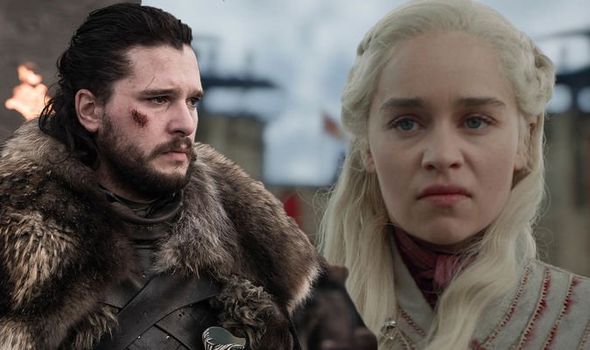 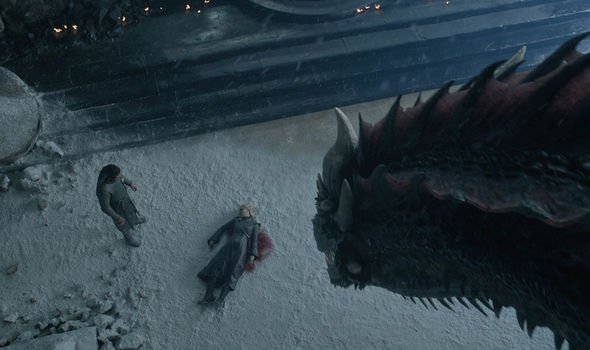 But now fans of the show on Movie Mistakes have pointed out the blood distribution doesn’t quite add up during the next few scenes.

They wrote: “When Daenerys is dead she has blood underneath her back and hair, and as the camera is above her, her right arm is curved or bent a little.

“When Drogon picks her up her arm is now straight and despite the blood on the ground she seems to be completely clean. No blood on her back, hair or scarf.”

Of course it makes sense that the show was filmed in multiple takes, however in the show it is hard to discern why Daenerys would be cleaned up before being touched by the dragon. 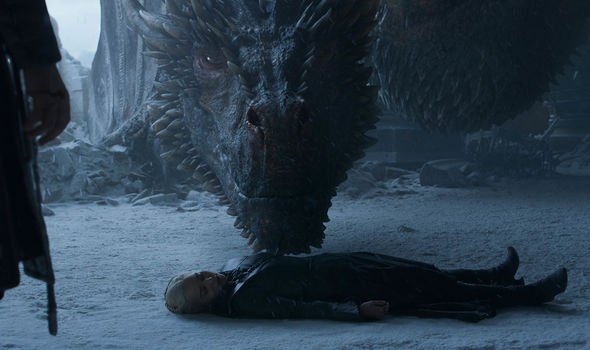 This has obviously perturbed fans, but it is not the only supposed oversight pointed out in the scene.

The fan went on to point out Drogon’s position did not exactly match up during these scenes.

They went on: “Then as Drogon flies away, how on earth did he pick her up with his left hind leg?

“Did he twist his leg 180 degrees to pick her up with his front claw?”

Upon rewatching the scene viewers will notice Drogon is sat looking directly at Jon.

Therefore, his left leg was not the closest to Daenerys’ body – so did Drogon move around between these scenes?

A similar issue was spotted during the iconic Red Wedding scene back in season two.

Speaking out about the scene, a fan noted that Robb Stark (Richard Madden) changed position during the death of his wife, Talisa (Oona Chaplin).

Discussing this issue, the fan explained: “At the climax of the Red Wedding massacre, Robb crawls towards his dead wife Talisa from the direction of the doors, which are at the opposite side from Walder Frey’s throne.

“Robb turns Talisa onto her back from her left side (ie. he is on the right hand side of her body), and looks down at her face.

“This means that Talisa is lying in such a way that, if facing Walder’s throne, her head is on the right and her feet on the left, towards where Catelyn is holding Walder’s wife hostage and pleading for Robb’s life.”

Game of Thrones seasons 1-8 are available on NOW TV.