Grant Shapps was invited onto BBC Breakfast on Thursday to discuss a controversial shake-up to UK railways and the reported concerns of travellers at UK airports over Covid-19. BBC’s Charlie Stayt questioned the Transport Secretary on whether it was fair passengers were being forced to stand next to UK arrivals from “red list” countries but hit out at Shapps for not “sticking to the issue”.

Stayt asked: “I want to talk to you about airports specifically in relation to Covid.

“Why is it that passengers coming into the UK from amber and red countries are not separated? Everyone has seen the pictures, this is a real risk.”

“A lot of this is to do with the practicalities of course and everyone has to be tested before they are even able to get on a flight to the UK at departure testing,” Shapps replied.

“I do want to see people separated out as much as it’s practically possible and we have asked Heathrow and they will be beginning to respond to this next month.” 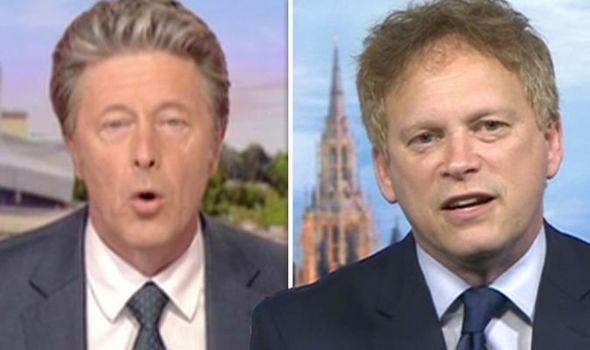 “If possible to even use un-used terminals, by the way there are only four percent of the usual number of people traveling through airports so there is excess space and Heathrow, I think, are planing to use separate terminals to bring in the red flights,” he continued.

“So we are trying to do as much as possible to separate people out but we’re asking people to use their common sense with travel.”

“It’s okay to go to a green country but…,” he said before Stayt interrupted: “Hold on Mr Shapps, can we stick to one issue?”

“From what I can understand from the answer you gave me, at least another 10 days in which you’ll be expecting people from amber and red countries moving together.”

“You said from the beginning of next month, people have no choice in that situation,” Stayt added.

“They are herding into those environments, personal responsibility has got nothing to do with it.

“You’re saying you’ve got a minimum of 10 days of that carrying on in the middle of a real crisis with the Indian variant.”

“First of all, you say people have no choice, we’re not forcing people to travel right now,” Shapps hit back.

“Secondly, every single person in that airport has taken a coronavirus test to have even got on the plane.

“And thirdly, Heathrow and the other airports are working as hard as they can to try and keep passengers socially distanced.”

“We’ve been going through this crisis for a long time now and people are wearing face coverings and keeping socially distanced as much as is possible,” the Transport Secretary shared.

“The amount of people travelling is 96 percent down on where it would have been in the last full year, 2019 and the airports are trying to take additional steps such as opening un-used terminals as well.”

BBC Breakfast viewers slammed the airport chaos as one tweeted: “How is it that flights are still arriving from red list countries such as India @grantshapps? Surely there should be no flights in or out from/to those on the red list?”

“F**k me it’s not rocket science is it. Keep them apart,” another vented.

Someone else asked: “If it’s 96 percent down why are there hours and hours of queues?”

“Here’s a plan….maybe just ban all flights into the country from red list nations,” a fourth said.

BBC Breakfast airs daily on BBC One at 6am.