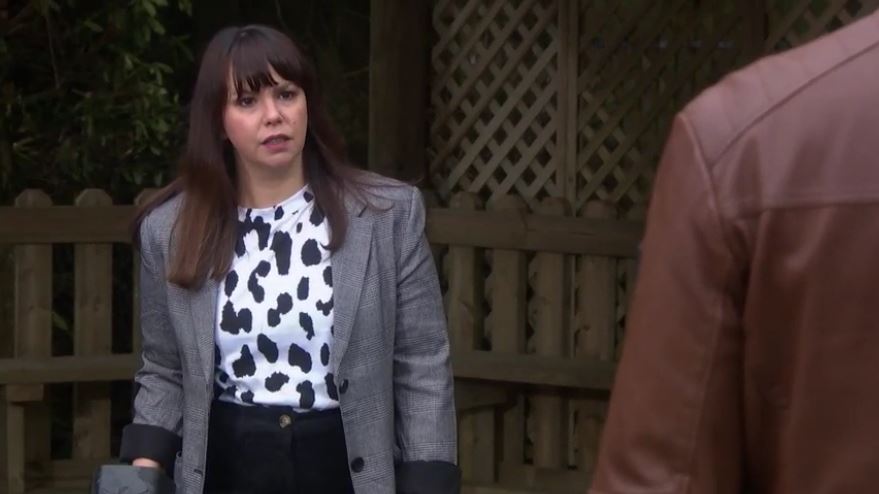 John Paul was charged with the murder of boyfriend George Kiss (Callum Kerr) last week, after the copper was killed outside the pub.

Viewers are in the dark about who it was that committed the dastardly act, but Nancy reckons that – in spite of what the police think – John Paul is one hundred percent innocent.

She’s therefore made it her mission to get the evidence to prove that her best buddy is not the killer, and in last night’s edition of the Channel 4 soap, she made what she thought to be a huge breakthrough in the case.

With George’s ex Dean Vickers (Paul Sloss) back in the village, the teacher set up a meeting with him, and attempted to get him to confess to the crime.

Dean ultimately worked out what she was up to, but not before he said some pretty incriminating things on tape.

A heated showdown ensued, and Darren Osborne (Ashley Taylor Dawson) arrived in the nick of time, and berated Nancy for putting herself in the firing line.

In tonight’s first-look episode, Darren warns her once again that she’s playing with fire, but Nancy refuses to back down, as she sets off to meet with the McQueens to tell them what she knows.

After listening to the recording of her conversation with Dean, Goldie (Chelsee Healey) says something which inadvertently gives Nancy an idea: she’s going to look for the murder weapon!

She sets off to do just that, digging for evidence in the new park set – which viewers will catch a glimpse of tonight.

The question is: will Nancy find the murder weapon? If so, will she be able to prove beyond a shadow of a doubt that John Paul did not kill George?

Hollyoaks airs these scenes Friday April 30 at 7pm on E4.