Home » TV and Movies » Horse Riders, a City Street and a History Now Captured on Film

Horse Riders, a City Street and a History Now Captured on Film

On Fletcher Street one summer morning in 2019, Ricky Staub was asked to walk the plank.

For decades, Fletcher Street — a slice of North Philadelphia’s Strawberry Mansion neighborhood — had been home to urban horse stables, and a hub for Black equestrians, and Staub had started spending time there after befriending a local rider.

That’s how Staub found himself struggling to push a wheelbarrow up an angled wooden beam as a group of stable regulars watched his every wobble. Staub was eager to prove himself. He’d shown up for a day of dirty stable work wearing clean, bright sneakers (“like an idiot”) and couldn’t afford another rookie flub. Also, the wooden plank was teetering atop a colossal pile of horse manure.

“I’m literally going to be thigh-deep if I fall,” Staub said.

Lucky for him (and his sneakers), Staub kept his balance. And when he successfully finished his task, dumping the contents of the wheelbarrow — also full of manure — onto the growing pile, the spectators erupted in applause.

That daring maneuver is one of several firsthand experiences that Staub, 37, recreated in “Concrete Cowboy,” his first feature, which is now streaming on Netflix. In this coming-of-age tale, a Detroit teenager (Caleb McLaughlin) is sent to Philadelphia to live with his estranged father (Idris Elba, also a producer of the film), who ekes out a modern-day cowboy existence on Fletcher Street, where small stables sit modestly among rowhouses.

The movie, which Staub and Dan Walser adapted from the young-adult novel “Ghetto Cowboy,” by G. Neri, may follow a familiar Hollywood arc, but it is injected with extraordinary, sometimes surreal details drawn from Staub and Walser’s experiences hanging out with urban horse riders in Philadelphia for about two years. 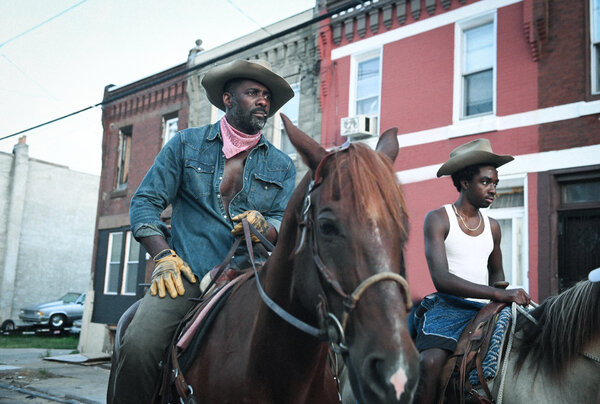 Consider, for instance, the campfire scene early in the movie, when the riders gather around a fire at night, swapping stories by the light of flames, which spew from the belly of a metal barrel. It’s a tableau, complete with cowboy hats, taken straight from a classic western. It’s also something you might see offscreen today.

“In the summertime, any given night that you want to, you go around to Fletcher Street stables and there will be at least three guys with a tin-can fire sitting outside, just relaxing,” said Ivannah-Mercedes, a rider who grew up caring for horses on Fletcher Street in the 2010s. Mercedes, who plays a fictional cowgirl in “Concrete Cowboy,” is one of a handful of riders — some still active there, others now based at different stables around the city — who got involved in the film, on both sides of the camera.

The riders pointed to many details in the movie that were true to their own experiences, chief among them that riding has proved an indispensable form of healthy recreation in an environment where gun violence and other dangers can be difficult to avoid.

Young people “need alternatives,” said Michael Upshur, 46, who began riding horses on Fletcher Street as a child in the early ’80s. “If they only see people on the street corner, that’s what they’re going to gravitate to.”

Upshur said that he had boarded more than a dozen horses on Fletcher Street over the years. Like other riders there, he views the stables as more than a passion or a pastime.

“Being with those horses taught me to have patience,” he said. “I found myself thinking a lot more before I act.”

Upshur described methodically washing horses with a hose, watching as they playfully chomped at the stream of water. Over the decades, he has often ridden in Fairmount Park, about a 10-minute ride from the stables.

“There’s something about you and that park,” Upshur said. “You can hear the sticks cracking while your horse is walking on those little twigs. You see the little squirrels running through, and the horse jumps a little bit — it calms you.”

Erin Brown, 37, remembers being told as a young rider that “your horse is a reflection of the type of person that you are.” Brown, who learned to ride on Fletcher Street in the early 1990s and later managed a barn there, said that caring for horses gave her a sense of responsibility when she was growing up. She said that for a period during her late teens, she “was headed down the wrong track,” but that the stables grounded her. She’s now a professional riding instructor.

“I honestly don’t know where I would be today — and so many others can say the same thing — if it were not for the horses,” Brown said.

Several Philadelphia riders teamed up with Staub and other members of the film’s creative team to create the Philadelphia Urban Riding Academy, a nonprofit that aims to maintain and preserve the history of Black riding in Philadelphia. (Brown is the organization’s executive director; Upshur and Mercedes are on its board of advisers.)

Riders on Fletcher Street have long worried about the future of the stables, as gentrification and new development loom. Each stable in the cluster on Fletcher Street is individually owned and managed. There have been problems with conditions over the years, leading to run-ins with the city and the Pennsylvania Society for the Prevention of Cruelty to Animals. And the large, grassy field across from the stables — a set piece in the movie that has served as an open space for riders — is now being developed. The Philadelphia Urban Riding Academy’s goal is to create permanent stables where riders from Fletcher Street and elsewhere in the city can make a sustainable home for their horses.

Brown, Upshur and Mercedes each emphasized that the history of urban ridership in Philadelphia should be preserved, and that the sense of empowerment and responsibility that horses offer riders is an invaluable — and irreplaceable — asset in the community. The Hollywood actors in “Concrete Cowboy” sensed that, too.

Lorraine Toussaint, who plays one of the fictional riders, said she was struck by “the discipline involved with the care and maintenance and love of these extraordinary animals.”

“I fell in love with horses so much,” she added, “that I actually went off and bought a horse farm after this film.”

Elba himself felt the rush and grit that the real riders described.

“These were really proud moments for me,” he said. “It felt very powerful jumping on a horse — you feel tall. You’re on this majestic beauty of a beast.”

Elba was so committed to shining a light on the Philadelphia riding community that he signed on to produce “Concrete Cowboy” when it was still a script in search of financing and took up the challenge of playing opposite actual local riders. He even contributed a song to the film’s soundtrack.

Elba did all of this despite an unchangeable, rather inconvenient truth: He’s allergic to horses.